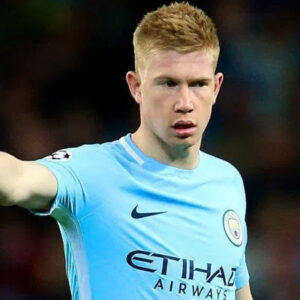 Belgian football player Kevin De Bruyne competes for both the Belgian national team and Manchester City of the English Premier League. He was named the “fourth best footballer” in the world by “The Guardian” in 2017, and the media frequently refers to him as the “best European Footballer” and a “complete footballer.” He began his amateur football career in Ghent, Belgium, where he was born and raised. He played for the team “Genk” and helped his team win the “Belgian Pro League” in 2010–2011. He was signed by “Chelsea” in 2012 after the Premier League teams took notice of his performance. He later signed with the German team “Wolfsburg” and received the distinction of “Germany’s Footballer of the Year” for 2015. He received the honor as a result of his productive 2014–15 season with Wolfsburg, which included 16 goals and 27 assists. Manchester City made a six-year announcement about his membership in the team in August 2015. Kevin participated in both the UEFA Euro 2016 and the 2014 FIFA World Cup as a member of the Belgian team.

Herwig and Anna gave birth to Kevin De Bruyne on June 28, 1991, in Drongen, Ghent, Belgium. Due to his mother’s heritage, Kevin spent the first few years of his infancy traveling around England and Africa. His father had an energy investment company, therefore his family was virtually perpetually on the move for work-related reasons.

When Kevin was 4 years old, he played football for the first time in his hometown of Drongen. He then began participating in school football. The fact that Belgian football at the time Kevin was growing up was in a really pitiful state was one of the main early motivators for Kevin.

Due to a lack of infrastructure that could support his goal of becoming a world-class football player, Kevin left his home when he was 14 years old. He enrolled in the youngster program at Genk’s academy and began developing his abilities. He began receiving media notice during his early years at the academy itself and was already a famous player by the time he was a teenager.

Despite the fact that his family had plenty of money, Kevin was able to get by on the meager wages he received from the club. He believes that this period was the one that gave him his independence. He only made weekend trips to see his family because he devoted himself entirely to football.

His perseverance paid off in 2008 when he was chosen for the first-team squad in Genk. He made his debut in May 2009. He wasn’t able to make a name for himself on the team until the following year, though. Genk’s 2010–11 campaign was fortunate for them because they won the Belgian Championship.

Kevin had five goals and 16 assists in the 32 games he participated in during his time in the league.
Kevin’s first hat trick for Genk came in a match-winning effort against Club Brugge in October 2011. In 28 games, he scored 8 goals for the league as a whole. Kevin joined the English team, Chelsea, in February 2012, and he made his debut in July of the same year.

In advance of the Bundesliga, Chelsea officially announced in August 2012 that Kevin had been temporarily transferred to the German team Werder Bremen. His competitive play in the Bundesliga fully justified his loaning, and in July 2013, Kevin returned to the starting lineup for Chelsea.

Just before the 2013–14 season, Kevin suffered a knee injury while scoring a goal in a friendly match against Malaysia. He was, however, in shape when he faced Hull City in his Premier League debut. Kevin contributed to his team’s opening goal in the game that Chelsea won.

He was underwhelmed by Chelsea, and the team decided to let him leave for Wolfsburg in January 2014. He excelled in the 2014–15 Europa League and attracted the appropriate notice. He scored two goals against Krasnodar in the third group stage encounter, and he added another goal against Bayern Munich in the following match to further secure his team’s success.

With 10 goals and 21 assists throughout the entire league season, Kevin’s squad finished as the first runner-up. As a result, they were able to qualify for the UEFA Champions League in 2014–15 very comfortably. He has crowned the German Footballer of the Year after finishing his first season with Wolfsburg with a total of 16 goals. His 21 assists set a new league mark.

Kevin was reportedly actively pursued by the English team Manchester City in the early months of 2015, and the club made two approaches to him before he finally accepted their offer in August. Manchester City made an official statement at the end of August that they had signed Kevin to a six-year contract. He was the second-most expensive player ever acquired by an English team, costing 55 million pounds.

He scored in nearly every one of his first three games for MC, and in October 2015, it was rumored that he was a Ballon D’or contender. He significantly contributed to his team reaching the Football League Club finals. But a misfortune injury in the semifinals forced him to take a two-month vacation from playing.

He made a comeback in April 2016 just before the UEFA Champions League, and he went on to score goals to help his team get to the semifinals. Manchester City has never advanced this far in the Champions League before. However, his team’s hopes of winning the league remained unmet.

In September 2016, he received two “man of the match” awards and had a passable season. He was given a new contract in January 2018, and Manchester City declared that they will keep him through 2023.
Given that Kevin’s mother was an Englishwoman, it was rumored that he would play for the English national team in his international career. But he decided on Belgium, and in a 2010 friendly match against Finland, he made his debut for Belgium. He had participated in numerous underage teams for his country prior to his official entry into the senior team.

He was among the first players to be named for the 2014 FIFA World Cup in May of that year, and he was honored as “man of the match” in his team’s opening game against Algeria. Additionally, he was selected for the 2016 UEFA Euro team. His nation’s team fared poorly and was already eliminated early on.

Since their relationship began in 2014, Kevin De Bruyne and Michele Lacroix have been parents to a son, who was born in 2016. After the birth of the child, the couple married in June 2017.

Both on and off the field, Kevin is renowned for having a short fuse. The Daily Mail revealed in 2013 that Kevin’s then-girlfriend Caroline Lijnen had an extramarital affair with Thibaut Courtois, a member of his team. Courtois was brutally attacked by Kevin during one of their practice sessions, but they later made up.

Kevin traveled widely as a child, and thanks to his passion for language acquisition, he is fluent in French, Dutch, English, and German.

Belgian professional soccer player Kevin De Bruyne has a $60 million fortune. He is arguably most known for his role as a winger or attacking midfielder for Manchester City. Additionally, he has represented both Belgium and the German Bundesliga club VfL Wolfsburg.