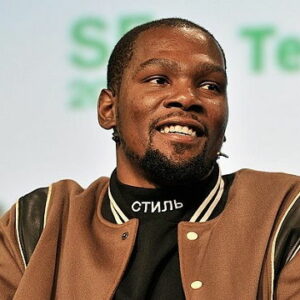 Kevin Wayne Durant is an NBA basketball player for the Brooklyn Nets of the National Basketball Association. He has won numerous trophies, including two ‘Finals MVP Awards’ and two Olympic gold medals. Durant, who was born in the United States and raised in Washington, DC, has always loved basketball. He and his father used to travel across the country for basketball tournaments when he was a teenager. He was also a basketball player in the schools where he attended. After enrolling at the ‘University of Texas,’ his outstanding athletic abilities earned him the ‘Oscar Robertson’ and ‘Adolph F Rupp’ prizes, making him the first freshman to receive both honors. After just one year of collegiate basketball, he was eligible for the ‘NBA’ draft due to his great talent. Durant’s greatest triumph as a professional basketball player occurred at the 2012 Olympics, when he not only broke the record for total points scored in an Olympic basketball competition, but also helped the national team win gold. He returned to the squad during the 2016 Olympics, where they won a gold medal for the second time. He won the ‘NBA Championship’ twice in a row while playing for the ‘Golden State Warriors.’

Kevin Wayne Durant was born in Washington, D.C., to Wanda and Wayne Pratt on September 29, 1988. His father abandoned the family while he was still a child, and the boy was reared by his mother and grandmother. He has three brothers and sisters: a sister named Brianna and two brothers named Tony and Rayvonne.
Kevin grew up to be a tall young man with a passion for athletics. His grandmother Barbara Davis encouraged him, saying that his height was a blessing and that it will aid him in his sports career. Kevin’s father reconnected with him when he was around 13 years old, and the two went on a basketball tournament tour together across the country.

Career\sKevin Wayne Durant began his basketball career by playing for many teams in the Maryland area in the ‘Amateur Athletic Union.’ He met future ‘NBA’ players Michael Beasley, Greivis Vásquez, and Ty Lawson during this time.
He attended the ‘National Christian Academy’ and the ‘Oak Hill Academy,’ among other schools. He was a standout basketball player at both institutions. For his final year, he switched to ‘Montrose Christian School.’ He was six feet and seven inches tall at this point.
Later, he enrolled at the ‘University of Texas,’ where he won the ‘Oscar Robertson’ and ‘Adolf F Rupp’ prizes for his outstanding performance during his first year. He was deemed eligible for the ‘NBA’ draft after just one year of college basketball due to his remarkable basketball talents.
He began his professional career after being selected by the ‘Seattle SuperSonics’ in the 2007 ‘NBA’ draft. In his first game against the ‘Denver Nuggets,’ he had 18 points, five rebounds, and three steals. On November 16, he made his first career game-winning shot against the ‘Atlanta Hawks’ in a game against them. He was named ‘NBA Rookie of the Year’ for his outstanding performance.
His team moved from Seattle to Oklahoma City the following season, becoming the ‘Oklahoma City Thunders.’ Durant’s scoring average has increased by five points from the previous season by the end of the year. He was also a finalist for the ‘Most Improved Player Award,’ although he finished third.
He was chosen for the ‘FIBA World Championship’ in 2010. At the competition, he was outstanding, guiding the United States to the ‘World Championship’ title.
Durant was nominated for the 2012 Olympics after a couple of years, where he not only broke the record for total points scored in an Olympic basketball competition, but also helped his team win gold. He returned to the national squad at the 2016 Olympics, when he once again helped the team earn a gold medal. Along with Carmelo Anthony, he was named the 2016 ‘co-USA Basketball Male Athlete of the Year.’
He signed a two-year, $54 million contract with the ‘Golden State Warriors’ in July 2016. His decision was met with disapproval from the general public and ‘NBA’ commentators.
In October 2016, Durant lost his first game with the ‘Warriors’ against the ‘San Antonio Spurs.’ He came back strong against the ‘Minnesota Timberwolves,’ scoring a career-high six block shots. He also made history by becoming the first player in NBA history to record five blocks, five assists, ten rebounds, and 25 points in a single game.

Durant returned to the 2016-17 season after suffering an injury and appeared in the Warriors’ third consecutive ‘NBA’ final, where they faced the defending champions, the ‘Cleveland Cavaliers.’ He became his team’s leading scorer, averaging 35.2 points, 8.4 rebounds, and 5.4 assists while shooting 55.5 percent from the field, 92.7 percent from the free throw line, and 47.4 percent from three-point range to help his club win the championship. He was named ‘NBA Finals MVP’ for his outstanding effort.
The next season, the champion ‘Warriors’ advanced to the ‘NBA’ finals after defeating the ‘Cavaliers’ in the ‘Western Conference’ finals, clinching their second consecutive victory with Durant scoring a career-high 43 points, 13 rebounds, and 7 assists. That season, he also won his second straight ‘Finals MVP’ trophy.
The ‘Warriors’ suffered numerous losses to the ‘Los Angeles Clippers’ throughout the 2018-19 season. Durant injured his lower right calf in Game 5 of the 2019 NBA Finals while playing against ‘Toronto.’ In the end, the ‘Warriors’ lost Game 6 of the finals and their chance at a three-peat.
Durant inked a sign-and-trade contract with the ‘Brooklyn Nets’ on July 7, 2019.

Durant started uploading vlogs of his daily life on YouTube in 2017, where he has his own self-titled channel. He has over 750,000 subscribers and publishes videos on a daily basis.
Durant was in talks with producer Brian Grazer for a possible deal with his production business ‘Imagine Entertainment’ to create a basketball-themed drama series for ‘Apple,’ according to ‘Deadline.’

Kevin Durant has dated a number of women over his career, including Jasmine Shine, Ashley Champ, and Monica Wright. He’s been linked to Cassandra Anderson recently.
He is also well-known for his charitable endeavors. He contributed $1 million to the ‘American Red Cross’ in support of the Moore tornado victims in 2013.
Durant works as the organization’s spokesperson for the non-profit after-school music program ‘P’Tones Records’ in Washington, D.C. Durant is a fervent Christian who attends the Chapel prior to each game. On his stomach, wrist, and back, he has religious tattoos.
In his spare time, he enjoys playing video games.
At ‘Superbowl 50’ in 2016, he was a credentialed photographer for ‘The Player’s Tribune.’

Kevin Durant has a net worth of $200 million.