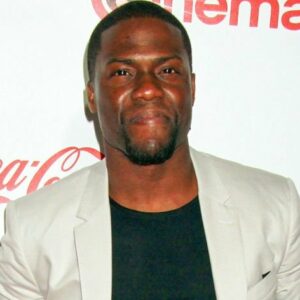 Kevin Darnell Hart is an actor and comedian from the United States who has acted in films such as “Paper Soldiers” and “Scary Movie 3.” Hart was born in Philadelphia, Pennsylvania, and grew up with a difficult father who was a drug user and a minor criminal. As a way of coping with his unhappy home life, he pursued humor. He began his comedy career shortly after graduating from high school. He began small and worked his way up to bigger clubs in New York and Los Angeles. As a comedian, he was quite popular, and he embarked on a series of comedy tours that helped him establish himself in the entertainment industry. He immediately moved on to television, where he rose to prominence after a recurring part in the American sitcom ‘Undeclared.’ His TV performances led to film offers, and he made his feature film debut in ‘Paper Soldiers,’ a criminal comedy. Following that, he starred in the hugely successful picture ‘Scary Movie 3’. He has also published three comedy albums in addition to his film career. Kevin Hart: What Now? was nominated for a Grammy Award in the category of “Best Comedy Album.” He has won numerous honors throughout his career, including the ‘BET Award,’ ‘Teen Choice Award,’ and ‘People’s Choice Award.’

Kevin Hart was born in Philadelphia, Pennsylvania, on July 6, 1979. Henry Witherspoon, his father, was a cocaine addict who spent the majority of his life in prison. As a result, Nancy Hart, Hart’s mother, reared him.
Hart used humor as a coping mechanism for his unhappy home life and discovered that he was naturally gifted at comedy.
He attended George Washington High School and then the Philadelphia Community College. He also worked as a shoe salesperson in Brockton, Massachusetts for a while. He later chose to pursue acting full-time after performing in a nightclub in Philadelphia.

Career as a comedian

Lil Kev was Kevin Hart’s stage moniker when he began his comic career. However, he was not successful in his first few gigs. By happenstance, he met a mentor in the form of Keith Robinson, a professional comic who began to coach him.
Hart later began performing under his own name and found immediate popularity. He started performing regularly in bars all around the country within a few months.
With his act ‘I’m a Grown Little Man,’ he began his comedy tours in 2009, followed by ‘Seriously Funny’ in 2010. After that, he proceeded on the ‘Laugh at My Pain’ and ‘Let Me Explain’ tours, which were also turned into films. He’s also the author of three comedy albums.

Kevin Hart began his acting career in 2002 with a role in Judd Apatow’s American sitcom ‘Undeclared.’ In the same year, he made his cinematic debut in the comedy ‘Paper Soldiers,’ in which he played a lead part.
He then starred in ‘Scary Movie 3’, the third installment in the Scary Movie franchise, which was released in 2003. Despite receiving mixed reviews, the picture was a monetary success. He appeared in the film ‘Death of a Dynasty’ the same year.
He played the major part in the comedy film ‘Soul Plane’ in 2004. The film was a box office flop and received mixed reviews. The fourth film in the Scary Movie franchise, ‘Scary Movie 4,’ was his next major part.
He appeared in films such as ‘Epic Movie’ (2007), ‘Superhero Movie’ (2008), ‘Not Easily Broken’ (2008), ‘Death at a Funeral’ (2010), and ‘Little Fockers’ in the years that followed (2010).
In the 2012 romantic comedy film ‘Think Like a Man,’ he portrayed one of the lead characters. The picture was a commercial success, grossing over $96 million worldwide. It received mixed reviews. The next year, he played opposite seasoned actors Sylvester Stallone and Robert de Niro in the sports comedy film ‘Grudge Match.’ The picture was a moderate commercial success, despite generally unfavorable reviews.
He made his acting debut in the action comedy flick ‘Ride Along’ in 2014. Though the film received generally unfavorable reviews, it was a financial success. He appeared in the romantic comedy film ‘About Last Night’ the same year. It was a critical and financial hit. His following film, ‘Get Hard,’ was a commercial triumph but a critical disaster when it was released in 2015. ‘Central Intelligence’ and ‘The Secret Life of Pets’ were two of his most notable works of 2016. Both films were critically and commercially successful. He is most known for his portrayal as Captain Underpants in the 2017 animated feature ‘Captain Underpants: The First Epic Movie.’ The movie was a box office hit and earned excellent reviews.
He first appeared in the comic drama film ‘Upside,’ and then in the comedic adventure picture ‘Jumanji: Welcome to the Jungle,’ in which he played a major role. The film was a commercial success, grossing about $1 billion at the box office. The majority of critics gave it positive reviews.

Kevin Hart’s early credits include roles in the ‘The Scary Movie’ franchise’s third and fourth installments. Hart played CJ, a minor character in the film. Commercially, the films were a huge hit, but critical reviews were generally unfavorable. The franchise is well-known for parodies of cult horror films.
In the romantic comedy film ‘Think Like a Man,’ Hart portrayed one of the leading characters. The picture, directed by Tim Story, was a box office hit, grossing $96 million on a $12 million budget. The film was based on Steve Harvey’s book “Act Like a Lady, Think Like a Man.” It was divided into four parts, each telling the story of a different marriage. The critical response was largely mixed.
‘Jumanji: Welcome to the Jungle,’ an adventure comedy fantasy film in which he portrayed one of the lead parts, is another of his successful works. It was based on the 1995 film ‘Jumanji,’ which was based on the same-named children’s novel. The picture, which was made on a budget of roughly $90 million, grossed more than $960 million, more than 10 times its original budget. Positive feedback was also received.

Since 2016, Kevin Hart has been married to Eniko Parrish. They have a son, who was born in November of last year. Kenzo Kash was his name.
Hart was previously married to Torrei Hart, whom he divorced in 2011. From his first marriage, he has two children.