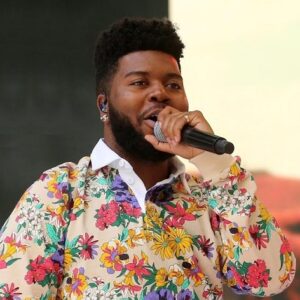 The debut single by American singer-songwriter Khalid, “Location,” reached its highest position on the US Billboard Hot 100 list at number sixteen. His first studio album, “American Teen,” which was purposefully given this title to challenge stereotypes about “decent Americans,” was equally popular and peaked at No. 4 on the US Billboard 200 albums chart. He was raised by a single mother who worked in the military and moved about a lot. He frequently uses his songs to depict terrible visions of teenage loneliness as well as images of love. The millennial liberally draws allusions to technology when discussing fragile relationships, including cell phones, photo albums, GPS, ride-sharing applications, and occasionally pot. He claims that despite having composed songs about people who struggled with suicidal thoughts, he did not experience the same emotions but had occasionally wished to “vanish.” He had felt rootless throughout his infancy and adolescence, but after moving to El Paso, Texas, he felt a sense of belonging. While musicians like Kendrick Lamar, A$AP Rocky, Father John Misty, Frank Ocean, Grizzly Bear, Chance the Rapper, Lorde, India.Arie, and James Blake have had an influence on his work, he credits his mother as being his greatest musical inspiration.

Khalid Donnel Robinson was born on February 11, 1998, in Fort Stewart, Georgia. His single mother Linda Wolfe, who spent more than ten years as a supply technician in the military, reared him. They had to move around a lot while he was young because of her employment; they spent six years each in Heidelberg, Germany, Fort Campbell, Kentucky, and Fort Drum, Watertown, New York.

When he was in the second grade and lived in Germany with his mother, his father passed away after being hit by a car. His parents divorced when he was very little. Later, as a Sergeant First Class, his mother resigned from the military at Fort Bliss in El Paso, Texas.

Due to family troubles, his mother, who in the 1990s wanted to be an R&B singer, joined the military and played with a U.S. Army band. She frequently practiced duets with him at home. This piqued his interest in music and inspired him to study the styles of well-known vocalists on YouTube, including Fleetwood Mac, Adele, Bill Withers, Aaliyah, and Father John Misty.

He appeared in school musicals, portraying Cornelius in “Hello, Dolly” and Seaweed in “Hairspray,” after the family relocated to New York following their return from Germany. Because of his musical ability, he became well-known and a victim of bullying.

He spent his senior year of high school in El Paso, Texas, at Americas High School. In high school, he started writing and recording songs, which he then uploaded to his Soundcloud website. Initially, he had considered becoming a music instructor.

The career of Khalid Robinson

‘Saved’ and ‘Stuck On You’ are just a couple of the early songs that Khalid posted online. He managed to get in touch with producer Syk Sense and received permission to work with him in an Atlanta studio because he was eager to release another song before prom.

He wrote “Location” first in Atlanta and then again in El Paso before releasing it. This song would go on to become his breakout smash and earn him many platinum certifications from the RIAA. The song peaked at No. 20 on the Billboard Hot R&B Songs list on January 21, 2017, and it peaked at No. 10 on the Mainstream R&B/Hip-Hop Airplay chart in 2016.

He was a featured artist on Alina Baraz’s January 2016 single, “Electric.” He worked on the song “Whirlwind” from the Yours Truly and Adidas Originals Songs from Scratch series in December of that year with the Brooklyn-based duo Brasstracks. The song had over 700,000 SoundCloud plays.

He embarked on his first headlining tour in January and February 2017 called the “Location Tour,” which visited 21 cities across the US, as well as Canada and Europe. All 25 of his tour dates were sold out, including the Tricky Falls in El Paso, which has a capacity of 1500.

On March 3, 2017, Khalid released his first studio album, “American Teen,” following the tour’s conclusion. The album, which received support from the singles “Location” and “Young Dumb & Broke,” started at No. 9 on the “Billboard 200” and rose to No. 4 in August. It also topped the R&B Albums list.

Uncredited vocals by Kendrick Lamar were heard on the promotional song “The Heart Part 4,” which was released on March 24, 2017. The single “1-800-273-8255” by Logic, on which he appeared with Alessia Cara the following month, became his highest charting single, reaching No. 3 on the “Billboard Hot 100.”

On March 15, 2017, he made his debut on television when he appeared on “The Tonight Show Starring Jimmy Fallon” and sang “Location” with “The Roots.” The ABC drama series “Grey’s Anatomy” used one of his songs, “Angels,” on the episode “Don’t Stop Me Now” on April 27, 2017.

On July 12, 2017, he launched the 25-city “American Teen Tour,” his second headlining tour. He collaborated with Lorde, a musician who had a significant impact on him, to start her UK tour in September of that same year.
On March 16, 2018, his most recent song, “Love Lies,” which he co-wrote with Fifth Harmony’s Normani Kordei for the soundtrack of the upcoming drama movie “Love, Simon,” will be made available.

Khalid was ranked among the top 10 new artists to watch in 2017 by a number of publications, including ‘Billboard,’ ‘Rolling Stone,’ and ‘Yahoo.’ In July 2016, he ranked No. 2 on the ‘Billboard Twitter Emerging Artists’ ranking.
He received two awards in 2017: “Best New Artist” at the MTV Video Music Awards and “Woodie To Watch” at the Woodie Awards. He received nominations for a number of additional prizes that year, including the “BET Awards,” “Teen Choice Awards,” “American Music Awards,” and “Soul Train Music Awards.”

Worth of Khalid Robinson: American singer-songwriter Khalid Robinson has a $10 million net worth. In February 1998, Khalid Robinson was born in Fort Stewart, Georgia. On Right Hand and RCA labels, he released American Teen, his debut studio album, in 2017. The album peaked at position three on the US R&B chart, position six on the US R&B/Hip-Hop chart, and position nine on the Billboard 200 chart. His gold-certified single “Location” peaked at #16 on the Billboard Hot 100 chart, #3 on the US R&B chart, and #8 on the US R&B/Hip-Hop chart. Other musicians with whom Robinson has worked include Logic, Alessia Cara, Calvin Harris, and Future. He received a Woodie Award for Woodie To Watch in 2017. Because his mother was a military spouse, he had the opportunity to reside all over the world, including Heidelberg, Germany, El Paso, Texas, and Fort Drum in Watertown, New York. He released an extended play studio album called “Suncity” on October 19, 2018, and it peaked at number one on the R&B chart and at #8 on the US Billboard Hot 100.

The song “Location” was originally intended for Khalid to upload on Soundcloud in time to “win prom king,” which he eventually accomplished. However, media star and model Kylie Jenner broadcast his single “Location” on her Snapchat to more than 30 million followers while he was celebrating his high school graduation in July 2016, which significantly increased its success.

He is a tremendous fan of Elton John, whom he had the pleasure of meeting at one of his performances in El Paso, Texas, where the iconic performer had written a song just for him. He was unable to see the event, though, since he had to leave the show early for a friend.