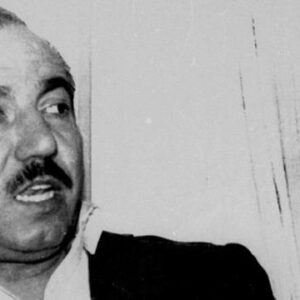 Khalil Al-Wazir was a Palestinian politician and a close assistant to Yasser Arafat, the Chairman of the Palestine Liberation Organization (PLO). He was a pivotal figure in the emergence of Palestinian resistance to Israel. When Israel conquered his hometown during the 1947 war, his family was forced to flee. Early on, this bred animosity of Israel, which would become the major driving reason for his fight. He graduated from a high school in the Gaza Strip. It was here that he discovered a way to express his hatred for Israel. His first “operation” against Israelis took place in high school, when he gathered a group of pals to annoy Israeli outpost guards. This seemingly innocuous exercise was only the start of a life dominated by military prowess. Al-Wazir afterwards met Yasir Arafat, and the two men created Fatah, which ultimately became the Palestinian Liberation Organization. These two groups were crucial to Arafat’s efforts to establish a Palestinian state. Al-Wazir is regarded by Israel as one of the most dangerous Palestinian terrorists ever.

Khalil Al-Wazir was born in Ramla, Palestine, on October 20, 1935. When Israel was established in 1948, this territory became a part of the country. Ibrahim Al-Wazir, his father, was a shopkeeper in town. When Israel took over the region and displaced 50,000 Palestinians, he lost his job.

Khalil Al-Wazir is a military strategist who has built a name for himself. The Egyptian government penalized him in 1954 for his role in the planning and execution of assaults against Israelis. Al-Wazir was imprisoned in Egypt in 1956 for belonging to the Egyptian Muslim Brotherhood. At the time, Egypt had outlawed this fundamentalist Muslim sect.

Al-Wazir had his first official military training shortly after his release from jail. He was arrested for the third time in 1957, this time for directing military raids against Israel. Exile to Saudi Arabia was his punishment. He worked as a teacher in Saudi Arabia.

When he relocated to Kuwait in 1959, he maintained his career as a teacher. He concentrated on laying the foundations of the Fatah organization in Kuwait. Al-Wazir and Yasir Arafat founded the terrorist organization Fatah in 1958. Fatah’s goal was to utilize guerilla warfare to combat Israel’s occupation of Palestine. In 1962, Al-Wazir moved to Algeria to build ties with the Algerian government and to run a Fatah training and recruiting center.

He developed ties with communist leaders in North Vietnam, China, and North Korea in 1963. Fatah gained worldwide support as a result of this. Fatah joined with a number of minor organizations to become the Palestinian Liberation Organization in 1964. Arafat was the PLO’s leader, while Al-Wazir was his right-hand man.

In 1965, Al-Wazir and the rest of Fatah’s leadership established a base in Syria. Al-Wazir and Yasir Arafat were arrested and convicted in 1966 for their roles in the assassination of Yusuf Orabi. The Syrian secretary-general finally pardoned the two individuals. Al-Wazir was a pivotal figure in the 1967 Six-Day War. Despite its defeat, Fatah became the Palestinian people’s most powerful faction as a result of this conflict.

In 1971, after Fatah was expelled from Jordan for the black September tragedy, he made his most significant diplomatic efforts. Al-Wazir made contact with Jordan’s government and worked out a solution. Al-Wazir relocated to Beirut after the black September issue. He planned and carried out operations like the Savoy operation in 1975 and the Coastal Road Massacre in 1978 during this time.

He had a conflict with the PLO leadership in 1982 over the civil war in Lebanon. He went to Tunisia and concentrated on instilling resistance among Gaza’s young. On April 16, 1988, he was slain at his house in Tunisia, putting an end to his life and career. His assassination is thought to have been carried out by Israeli commandos.

Khalil Al-Wazir is well recognized for his founding role in the terrorist group ‘Fatah.’ This was a political and militant movement whose purpose was to liberate the Palestinian people. The Savoy business in 1975 was one of Al-largest Wazir’s ventures. At the Savoy hotel in Tel Aviv, eight of his troops abducted and executed eight captives. Israeli troops made up three of the hostages. The Coastal Road Massacre in 1978 was his second-largest operation. Six of his assailants stole a bus and murdered 35 Israelis.

In 1962, Al-Wazir married his cousin Intissar. They had a total of five children, three males and two girls. Jihad, Bassem, Nidal, Iman, and Hanan are their names. Throughout his life, he was a divisive figure. He was regarded by Palestinians as a martyr and a symbol of the liberation struggle. Israel and its supporters, on the other hand, recognized him as the leader of a terrorist group.

Israeli forces killed him in front of his wife and kid on April 16, 1988. Few people are aware that Khalil Al-Wazir briefly studied architecture at Cairo University. He was also very concerned about the young. Until his death, he was an active source of hope for the youth.

The estimated net worth of Khalil al-Wazir is not available.