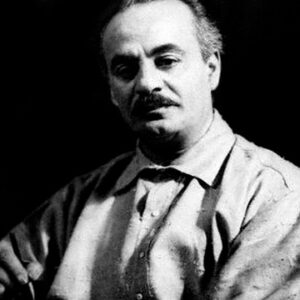 Khalil Gibran was a poet, essayist, and philosopher who lived in Lebanon. He was destined to spend the most of his life away from his beloved motherland, having been born in a remote village on Mount Lebanon called Mutasarrifate. His mother took him and his siblings to the United States when he was twelve years old, where he began formal education. He was soon spotted by Fred Holland Day, an avant-garde artist and photographer, and began to blossom under his tutelage. However, when his mother saw he was becoming too influenced by western culture, she sent him back to Beirut to learn about his roots. He resumed painting after returning to the United States, and at the age of twenty-one, he held his first solo exhibition. He started writing after that, first in Arabic and then in English. His compositions blended the two cultures’ influences and earned him a long-lasting reputation. He drew more than 700 illustrations, despite being better known as an author than an artist. Despite having lived in the United States for the majority of his life, he was a Lebanese citizen who cared deeply about the well-being of his birthplace.

Gibran was Khalil Gibran’s nickname. Khalil Gibran was born on January 6, 1883, into a family of Maronite Christians in the ancient town of Bsharri, in the Mount Lebanon Mutasarrifate, in the Kadisha Valley of northern Lebanon. It was part of the Ottoman Empire at the time of his birth, and it was semi-autonomous.
Khalil’s father, Khalil Gibran Saad Youssef Gibran, worked as a clerk in his uncle’s apothecary shop at first, but he soon became insolvent due to gambling debts and lost his job. Raji Bey, a local administrator, then appointed him as a strongman. He was a brawler with a short fuse.

Khalil’s mother, Kamila nee Jubran/Rahme, had previously been married twice, and Khalil’s father was her third. From her first marriage, she had a son named Peter (Butros). He was six years Khalil’s senior and was very hardworking and family oriented.

Khalil had two younger sisters: Mariana and Sultana, in addition to his step-brother Peter. They had no worldly luxuries in their distant settlement in Kadisha Valley. Khalil was never in school, but the priests who came to their house taught him Arabic and the Bible.

Khalil’s father was imprisoned in 1891 on graft allegations, and the authorities seized their property. They resided in relatives’ homes for a while after becoming homeless, before deciding to join Kamila’s brother in the United States.
The family had already become estranged due to their father’s careless actions, particularly Peter. Consequently, despite his release from prison in 1894, his family refused to change their plans, and on June 25, 1895, they left for the United States, leaving him alone in Lebanon.

The family settled in South Boston, Massachusetts, with their relatives, sharing a tenement. Kamila began selling laces and linens from door to door while Peter took responsibility of the family. She went on to run a dry goods store later in life.

On September 30, 1895, 12-year-old Khalil Gibran enrolled at Quincy School in Boston for the first time. His name was abbreviated to Khalil Gibran at the time of registration after he was previously known as Gibran Khalil Gibran.
He was put in a special class with other immigrant children at school, where they were taught English. At the same time, he began attending Denison Home Social Center, a local settlement house that houses an art school.
Gibran was introduced to famed photographer and publisher Fred Holland Day by his professors, who saw his artistic ability. Day began mentoring him after seeing his talent for writing and painting, dubbing him a “natural genius.”

Gibran began illustrating books and sketching portraits under the tutelage of Day. Day began introducing him to his buddies after a while. A book cover was created from one of his paintings in 1898.
Gibran’s mother and brother decided to send him back to Lebanon after seeing him become interested in western culture. He returned to Beirut in 1898, where he was accepted into the Madrasat-al-Hikmah, a Maronite-run preparatory school and higher-education facility.
On May 10, 1902, Gibran returned to Boston following the completion of his schooling in Beirut. Sultana, his younger sister, died of tuberculosis by that time. In 1903, both Peter and his mother died of the same ailment. Gibran resumed his artwork with the help of Mariana, who is now a seamstress.

Khalil Gibran used to correspond with Josephine Preston Peabody, a well-known poetess whom he had met at one of his mentor Fred Holland Day’s shows, while living in Lebanon. She assisted him in having some of his pieces exhibited at Wellesley College in Massachusetts in 1903.

His first show was held at Day’s studio in Boston on May 3, 1904. He met Mary Elizabeth Haskell, who was well-known for assisting a number of gifted individuals. She founded Miss Haskell’s School for Girls and eventually became the Cambridge School’s headmistress.

Haskell started patronizing Gibran because he thought he had a bright future. She not only tutored him in English, but she also aided him financially and used her clout to help him grow in his work. Despite their ten-year age difference, they became friends and stayed such until his death.
Gibran’s whole portfolio was destroyed when Day’s studio burned down in the winter of 1904. He subsequently began writing for an Arabic publication called “Al-Mouhajir” (the Emigrant), for which he was paid $2 each article. ‘Ru’ya’ was the name of his first article (Vision).

Gibran’s first publication date was in 1905. It was a passionate, but immature work about music called ‘Nubthah fi Fan Al-Musiqa.’ He started learning English with Haskell at the same time.
‘Ara’is al-Muruj’ was released in 1906, and it was his second publication. It was eventually translated as ‘Nymphs of the Valley’ and ‘Spirit Brides and Brides of the Prairie,’ and it featured three short stories. He also began writing a column, ‘Dam’a wa’btisama,’ in the same year (Tears and Laughter).

In 1908, he published his third work, titled “Al-Arwah al-Mutamarrida” (Rebellious Spirits). It focused on societal topics such as female emancipation and Lebanon’s feudal structure. The clergy in his homeland threatened to excommunicate him because of the content. The book was also slammed by the authorities.

In 1908, he travelled to Paris to develop his pastel and oil painting skills, which he was able to do with the help of Haskell. Here, symbolism had a strong influence on him, and he was invited to participate in a number of major exhibitions. The Société Nationale des Beaux-Arts accepted his painting ‘Autumn’ for a show.
He met many famous people in Paris and drew a series of pencil portraits of prominent artists such as Auguste Rodin. He did not complete his studies there, however, and instead traveled about England until returning to the United States in late 1910.

Gibran relocated to New York in 1911, where he spent the remainder of his brief life. He then began work on his next book, ‘Al-Ajniha al-Mutakassira,’ which he completed shortly after (Broken Wings). It’s his most extensive work, and it’s about women’s liberation. The writer himself is thought to be the protagonist.

Gibran founded ‘Arrabitah Al-Qalamyiah,’ an institution committed to the advancement of Arabic texts and literature, in 1911 as well. It aided not only other Arabic writers, but also Gibran himself.
Gibran’s prominence skyrocketed after the publication of ‘Broken Wings.’ He became regarded as a reformist as well as one of the most well-known ‘Mahjar’ (immigrant Arabic) poets.

Gibran opened a huge studio on West Tenth Street in New York in 1913. ‘The Hermitage,’ one of his best works, was completed in the same year. However, he prioritized writing above art throughout this time.
When the First World War broke out in 1914, he called on Lebanon’s Christian and Muslim populations to unite and fight the Ottomans. He was irritated by his inability to join the combat on the other side.

He began collecting money to help the starving masses when the great famine began, killing around 100,000 people in Beirut and Mount Lebanon. In the meantime, his fame in New York grew. He was the first immigrant to join the literary board of ‘The Seven Arts Magazine,’ which he founded in 1916.

Haskell married and went to Savanna in the 1920s, after aiding Gibran financially and editing his books. Gibran therefore hired poet Barbara Young to aid him with editing (pseudonym of Henrietta Breckenridge Boughton).
His health began to fail around this period. ‘Sand and Foam’ was published in 1926, and ‘Kingdom of Imagination’ and ‘Kalimat Jubran’ (Spiritual Sayings) were published in 1927.
‘Jesus, the Son of Man: His Words and Deeds as Told and Recorded by Those Who Knew Him,’ which he published in 1928, was completed concurrently in 1926/1927. Following that, he only wrote one book during his lifetime, ‘The Earth Gods,’ in 1931. The rest were only published after their deaths.

The Prophet, published in 1923, is Khalil Gibran’s most well-known work. Through Prophet Almustafa’s dialogue with a group of people, the poet discusses twenty-six various issues in this book, including love, marriage, children, labor, death, self-knowledge, eating and drinking, joy and sadness, buying and selling, crime and punishment, reason and passion. The initial English-language version of the book ran out in less than two years, and the American edition alone sold nine million copies by 2012. It has been published in forty different languages.

Despite having affairs with many women, Khalil Gibran lived his entire life as a bachelor. He is said to have proposed to Mary Elizabeth Haskell after returning from Paris in 1910, but she turned him down due to their age gap. They became lifelong friends instead.
Despite having lived in the United States for the majority of his life, he was always devoted to his birthplace and never acquired US citizenship. He bequeathed a large sum to the development of Lebanon in his will, so that his countrymen would not be compelled to depart.
Gibran died of cirrhosis of the liver and tuberculosis on April 10, 1931, in New York, at the age of forty-eight. ‘A Prophet Is Dead,’ announced ‘The New York Sun,’ and the city organized a two-day vigil in his honor.
Mary Haskell, along with his surviving sister Mariana, traveled to Lebanon in 1932 because he had indicated a desire to be buried there. The Mar Sarkis Monastery was purchased there, and he was interred there. Gibran Museum is the name given to the monastery since then.

Gibran Museum in Bsharri, Gibran Khalil Gibran Garden in Beirut, Kahlil Gibran Memorial Garden in Washington, D.C., and Gibran Memorial Plaque in Copley Square, Boston, Massachusetts, are just a few of the many structures and parks that bear his name.

A stamp honoring him was issued by the Lebanese Ministry of Posts and Telecommunications in 1971.
The Khalil Gibran Spirit of Humanity Awards were founded in his honor by the Arab American Institute Foundation in 1999. This award is granted every year to “individuals, corporations, institutions, and communities for their efforts to promote greater knowledge and respect of diversity and inclusion.”

Estimated Net Worth of Khalil Gibran

Khalil is one of the wealthiest poets and one of the most well-known poets. According to Wikipedia, Forbes, and Business Insider, Khalil Gibran has a net worth of $1.5 million.