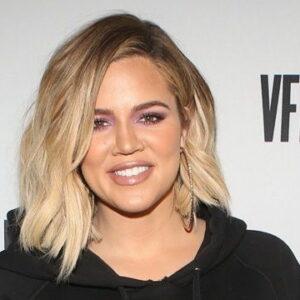 Khloe Alexandra Kardashian is a model, television personality, and entrepreneur from the United States. Her claim to fame was her appearance alongside her mother and siblings on her family’s real-life drama reality show ‘Keeping Up with the Kardashians.’ The sitcom was such a hit that it spawned a slew of spin-offs, making Khloe and her sisters household names in the United States. She also featured on a reality show with her then-husband, NBA basketball player Lamar Odom, whom she divorced later. When she was young, her parents split, and her father died when she was 18. This drew her closer to her mother, who had remarried and had a large number of children and stepchildren from both marriages. This became the central focus of their reality program, which depicted their individual personalities, love lives, fights, and professional careers. Khloe Kardashian and Lamar Odom have released a unisex fragrance. She also opened a business with jewelry and a clothing brand with her siblings. Khloe has also hosted a number of talk shows and is a spokesperson for a company that sells eco-friendly goods. She also has a cosmetics company and co-wrote two books with her sisters. Khloe has a sizable social media following, particularly on Instagram and Twitter.

Khloe Alexandra Kardashian was born in Los Angeles, California, on June 27, 1984, to Robert and Kris Kardashian. Her father was a well-known lawyer who defended footballer OJ Simpson during his much-publicized trial for the murder of his wife.
Khloe was the second youngest of Robert and Kris’ four children, who included three girls and a boy. Her parents split, and her mother married Olympic gold medallist in the decathlon, Bruce, who had four children from a previous marriage. Kris and Bruce’s marriage resulted in the birth of two children. Khloe is the youngest of ten children, including stepbrothers and sisters. From her mother’s side, she has a mix of Dutch, English, Irish, and Scottish ancestry. She went to ‘Marymount High School,’ a Roman Catholic all-girls school in Los Angeles. She then left school to pursue her education at home. At the age of 17, she earned her ‘GED.’
When she was 18, her father died of esophageal cancer. Though Khloe’s loss was devastating, it brought her closer to her mother.

In 2007, the reality show ‘Keeping Up with the Kardashians’ premiered. Khloe is seen with her siblings, mother, and stepfather Bruce in the video. The show was a huge hit, and it spawned two spin-offs: ‘Kourtney and Khloe Take Miami’ and ‘Khloe & Lamar,’ all of which were similarly popular.
The reality series followed the Kardashians’ personal lives, including their love lives, personal issues, and career endeavors. Khloe had a reputation for having a quick wit and unapologetic honesty as a result of the show, which made her famous among viewers. As a result of her achievement, she was invited to compete on ‘Celebrity Apprentice’ in 2009, where she came in tenth place.
As part of a family business, Khloe and her sisters created the ‘D-A-S-H’ boutique chain in Miami. They also launched the ‘Bebe’ jewelry and clothing line, and later launched the ‘K-Dash’ clothing line on the teleshopping network ‘QVC.’
During this time, she participated in PETA’s “I’d Rather Go Naked Than Wear Fur” campaign and collaborated with the “Natural Products Association” to launch the “Idol White” teeth whitening pen. She also promoted the ‘Glamour Tan,’ a false tan.
In 2009, Khloe Kardashian began hosting a weekly talk show on Miami’s ‘Top 40 Mainstream’ radio station, ‘WHYI.’ She also had a guest appearance in the season 3 premiere of the drama series ‘90210,’ alongside her sister Kourtney. She made another cameo appearance in ‘Kourtney and Kim Take New York’ in 2011.
In 2010, Khloe and her siblings earned a name for themselves with the publication of their book ‘Kardashian Konfidential.’ The Kardashians’ family affairs are the subject of the book. It also includes advice on how to live a meaningful life, as well as a slew of gorgeous images. The following year, they published “Dollhouse,” a novel about growing up as a superstar. With her then-husband, Lamar Odom, she also co-marketed two unisex fragrances, ‘Unbreakable’ and ‘Unbreakable Joy.’
In 2012, she debuted ‘The Mix Up with Khloe Kardashian Odom,’ a one-hour commercial-free radio show. As a result of the show’s success, Kardashian was invited to co-host the second season of the American version of ‘X Factor’ alongside Mario Lopez.
‘Kourtney & Khloe Take the Hamptons,’ a spin-off of ‘Keeping Up with the Kardashians,’ premiered in 2014. The discussion show ‘Kocktails with Khloe,’ presented by Khloe, was then broadcast.
In December 2018, Khloe Kardashian became a brand ambassador for ‘Burst Oral Care,’ and she conducted a corn test with the brand’s electric toothbrush. Khloe is now a well-known reality celebrity with a sizable social media following and a net worth of more than $40 million.

For her part in ‘Keeping Up with the Kardashians,’ Khloe has won the ‘Teen Choice Award’ on several times. In 2010, 2011, 2013, and 2014, she won the award four times in the category of ‘Choice TV: Female Reality / Variety Star.’
In 2015, she was nominated for the ‘In Style Social Media Award’ in the category of ‘Unlimited Celebrity Fitspo.’

In 2009, Khloe Kardashian married ‘NBA’ basketball player Lamar Odom and took the surname ‘Odom.’ The reality show ‘Khloe & Lamar’ showed episodes of their married lives. Unfortunately, the show’s stress caused them to split in 2013, and Kardashian discarded the surname. In 2016, the divorce was finalized.
She had a series of hookups after her divorce, including with hip hop musician French Montana and NBA player James Harden. She began dating Tristan Thompson, a Canadian basketball player, in 2016 and moved in with him in Cleveland, Ohio. True Thompson, Khloe Kardashian and Tristan Thompson’s daughter, was born on April 12, 2018. Kardashian ended her relationship with Tristan Thompson in 2019 after he cheated on her with Jordyn Woods, the best friend of her younger half-sister Kylie Jenner. In early 2021, Khloe and Tristan reconciled.

Khloe Kardashian has a net worth of $50 million.

Khloe was involved in a catastrophic vehicle accident in 2001, as a result of which she suffered traumatic brain damage and memory loss.
She was arrested for Driving Under the Influence (DUI) in 2007 and given a brief jail sentence. She also went through an alcohol addiction treatment program.
In 2009, a transsexual woman sued Khloe for an attack outside a pub. She’s also been charged in a case against the marketing line ‘Quick Time,’ for deceiving consumers about a weight-loss pill she promoted in a commercial.