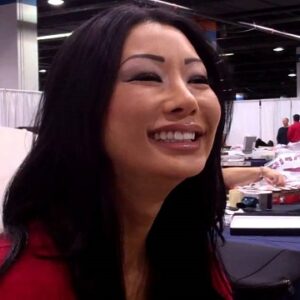 Kiana Kim is a well-known model, actress, and businesswoman from Korea. She rose to fame after starring alongside her fiancé, Pete Rose, in the reality television series “Pete Rose: Hits and Mrs.”
She is also well known for appearing in the movies “Virtually Heroes” and “The Jeff Probst Show,” both of which are on television. Kim frequently takes part in the “The Morning Wakeup Workout” portion of NBC’s “Today in LA.” She is a well-known “Playboy” model and has been featured in a number of issues of the magazine, to speak of her modeling career. In addition to working in the entertainment sector, Kim owns a hair salon and aspires to launch a distinctive skincare line. Even the lovely Korean beauty has achieved success as a real estate salesperson. Despite being successful in many commercial endeavors, Kiana Kim leads a fairly straightforward life. She exercises frequently to maintain her physical fitness and is incredibly active. The 37-year-old model is proud of her appearance and adores showing off her physical prowess.

After graduating, Kiana Kim initially wanted to work as a flight attendant. Later, after becoming a mother, she made the decision to work as a real estate agent. Kim enjoyed tremendous career achievements and financial accomplishments.

She then launched a hair salon and pursued a career in acting and modeling. She attracted the interest of the renowned magazine brand “Playboy” at this time. She then began taking part in photo sessions for the magazine, and she was then featured in multiple issues. She made an appearance on the “Howard Stern Show” in 2010 with her current fiancé, Pete Rose, and soon after that, she was the most popular search on Google.

She re-joined Rose in the reality TV series “Pete Rose: Hits and Mrs.” three years later, and she gained even more notoriety. She was also chosen for the movie “Virtually Heroes,” which was produced by Academy Award winner Roger Corman.

The Korean beauty gained millions of followers and lovers thanks to all her work in television and movies. She is now hugely popular on social media platforms like Twitter and Instagram.

Kiana Kim was born in Seoul, South Korea, on March 30, 1980. Her family relocated to the United States when she was five years old. She received a bachelor’s degree from Arizona State University, where she studied business marketing. After receiving her degree, she worked as an air hostess, got married, and brought up Cassie and Ashton.

She separated from her husband, nevertheless, and moved on to seek a career in acting and modeling. She began dating the considerably older baseball great Pete Rose after meeting him while modeling. The couple is currently engaged and planning a soon-to-be wedding.

Kiana Kim is a reality television personality and Playboy model who is Korean-American. Her net worth is $1.5 million. When it was announced that Kiana Kim was engaged to the late baseball great Pete Rose, she shot to stardom in 2013.

Jordan Yuam, who trained Taylor Lautner for the movie “Twilight,” is Kiana Kim’s personal trainer.
2) Kiana set out to create a business where she could assist ladies in feeling attractive and young when she launched her hair salon.

3) She is less than half the age of her fiancé, who is 39 years older than her.
4) She is now creating a line of skin care products and wants to grow her brand.
5) Kiana Kim was selected for “Playboy’s Sexy 100.”