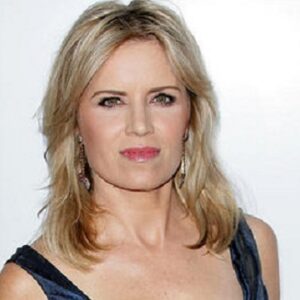 Kim Dickens is a well-known American actress who has been in a number of famous films and television series. She became interested in acting at a young age and went on to study at the Lee Strasberg Theatre and Film Institute. She began her acting career in the stage before moving on to feature films and television shows. ‘Hollow Man’ and ‘Gone Girl’ are just two of the big-budget, financially successful films she’s been a part of over her career. Her accomplishments have earned her nominations for a number of important awards. Kim Dickens has also appeared in popular TV shows such as ‘Fear of the Walking Dead,’ ‘Deadwood,’ ‘House of Cards,’ and ‘Treme.’ She is most well-known for her work in dramas, comedies, and mysteries.

Kim Dickens was born in Huntsville, Alabama, on June 18, 1965, to Justin Dickens and Pam (Clark) Howell. Her father was a vocalist in the country western genre.

She graduated from Lee High School in Hunstville, Alabama, and went on to Vanderbilt University in Nashville, Tennessee, where she earned a Bachelor of Arts in Communication.

She moved to New York after graduation to pursue her studies at the Lee Strasberg Theatre and Film Institute. She supported herself financially by working as a waiter throughout this time. Kim Dickens went on to the American Academy of Dramatic Arts, where she received her bachelor’s degree. She relocated to Los Angeles in the late 1990s.

Kim Dickens began her career in the entertainment sector by performing in theatre. At Vanderbilt University, she made her stage debut in a student production of the play ‘Sexual Perversity in Chicago.’

She made her feature film debut a few years later, in 1995, with the comedy ‘Palookaville.’ She appeared in television films such as ‘Voice from the Grave’ and ‘Two Mothers for Zachary’ shortly after.

She appeared in the film adaptation of Charles Dickens’ classic ‘Great Expectations’ in 1998. She had starring roles in the films ‘Zero Effect,’ ‘Mercury Rising,’ and ‘The White River Kid’ between 1998 and 1999.

Kim Dickens appeared in a number of notable films in the year 2000. She starred alongside Heather Graham in ‘Committed,’ Elisabeth Shue and Kevin Bacon in ‘Hollow Man,’ and Cate Blanchett in ‘The Gift.’ Her performance in the indie film ‘Things Behind the Sun’ received critical acclaim in 2001, and she was nominated for an Independent Spirit Award for Best Female Lead for her work in the film.

She also began working on television programs during this time. She appeared in the television series ‘Deadwood’ from 2004 to 2006. Other projects in which she has been involved include ‘Numb3rs,’ ‘Lost,’ and ’12 Miles of Bad Road,’ among others. ‘House of Sand and Fog,’ ‘Thank You for Smoking,’ ‘Wild Tigers I Have Known,’ and ‘Red’ were among her film projects at the time.

Kim Dickens first appeared in the television series ‘Treme’ in 2010 as Janette Desautel, a recurrent character. She appeared in 36 episodes over the course of three years.

She appeared in the television series ‘Sons of Anarchy’ from 2013 to 2014. Her performance as Detective Rhonda Boney in the feature film ‘Gone Girl’ in 2014 earned positive reviews.

Kim Dickens is a highly private person, with little information about her personal life available. She married her partner Alexander Rockwell in 1986, according to some reports, and the couple divorced in 1996.
She is married to Ken Dixon, a Canadian entrepreneur, and they have a daughter together.

Kim Dickens net worth: Kim Dickens is an actress from the United States with a net worth of $2 million. Kim Dickens was born in June 1965 in Huntsville, Alabama. Dickens attended Vanderbilt University, the Strasberg Theatre and Film Institute, and the American Academy of Dramatic Arts, among other institutions. She began her career on stage before moving on to film and television.