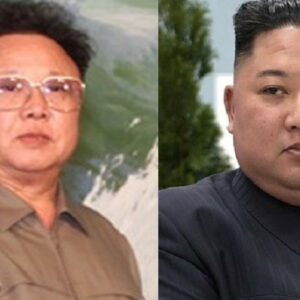 Kim Jong-il was North Korea’s supreme ruler for 17 years, from 1994 to 2011. Portraits, paintings, and larger-than-life mosaics of Kim Jong-il and his father, Kim II-sung, can be found on almost every building in North Korea, either side-by-side or standing together. After assuming power, he was known as ‘Great Comrade,’ ‘Supreme Commander,’ and even ‘Father,’ whereas prior to that he was affectionately known as ‘Dear Leader.’ He became the heir apparent to the country’s leadership in the 1980s, and he succeeded his father when he died in 1994. This dictatorial tyrant ruled North Korea with total power, making decisions on everything from senior-level appointments to the types of presents to be given to party leaders and the general public during national festivals. North Korea suffered from starvation and had a horrible human rights record under his reign. His “military first” approach enhanced the military’s role, making his country’s military the fourth largest standing army in the world. His death was preceded by miraculous circumstances, just as his birth had been.

Kim Jong-il was born on February 16, 1941, to Kim II-sung and his first wife, Kim Jong-suk, in Vyatskoye hamlet, near Khabarovsk, Soviet Union, while they were in exile during the Japanese invasion of Korea.
When he was born, a double rainbow appeared in the sky, a new star appeared in the sky, and the season changed from winter to spring, all of which were thought to be supernatural.
The family returned to Pyongyang after World War II ended in 1945 and settled in a former Japanese officer’s home. Unfortunately, his mother died in 1949 while giving delivery, despite claims that she was shot.
He graduated from Namsan Higher Middle School in 1960 and went on to Kim II-sung University, where he majored in Marxist political economy and minored in philosophy and military science.
During the early 1970s, he is thought to have studied English language at the University of Malta.

He joined politics in 1961 by joining the Workers’ Party, and after graduating in 1964, he progressed through the ranks of the party, eventually becoming a member of the Workers’ Party Central Committee to ensure the party’s ideological system functioned smoothly.
He implemented programs to strengthen the bonds between party workers and the general public, developed the Three-Revolution Team Movement, in which individuals were trained by political, technical, and scientific technicians, and took steps to simplify economic planning.
He was granted the title ‘Dear Leader,’ and was often referred to as a ‘fearless leader’ and ‘the great successor to the revolutionary cause,’ much as his father was.
He was assigned to prominent posts in the Military Commission, the Politburo, and the Secretariat during the Sixth Party Congress in 1980, giving him authority over all aspects of government.
Despite having no military experience, he was appointed Supreme Commander of the Korean People’s Army in 1991 and Chairman of the National Defense Commission in 1993.
Due to self-reliance policies and mismanagement, the country was utterly wrecked under his father’s rule, and a devastating famine ensued, resulting in immense misery and despair.
He instituted the “Military-First” program, in which the military was given national resources in order to keep it under his control and combat domestic and foreign threats.
In 1994, he agreed to abandon all nuclear weapons programs in exchange for fuel oil and aid in the development of two power-generating nuclear reactors with the US.
In 1998, he was re-elected as Chairman of the National Defense Commission, which he declared to be the “highest post of the state,” abolishing the presidency and naming his father as the “Eternal President.” Tensions between North Korea and the United States rose in 2003 after it was revealed that North Korea was building nuclear weapons, resulting in many multilateral negotiations between 2003 and 2005.
Despite US demands that all nuclear weapons projects be phased out, Kim Jong-il refused, confirming that his country had previously conducted a successful underground nuclear bomb test in 2006.
He was infamous for abusing human rights and establishing kwanliso, or gulag-like political prison camps, where over 200,000 detainees are still held and subjected to torture, famine rations, executions, and forced labor.
His absence from Pyongyang’s Olympic torch relay and military parade to commemorate North Korea’s 60th anniversary in 2008 sparked suspicions of his failing health following a devastating stroke.
His three sons, brother-in-law, and army commander, O Kuk-ryol, were reportedly contenders for North Korea’s next leader. In 2009, he named his youngest son, Kim Jong-un, as his successor.
In 2010 and 2011, he traveled to China and Russia with his heir apparent in order to enhance ties with both countries.

In 1974, he married Kim Young-sook and they had a daughter, Kim Sul-song.
He was known to have three mistresses in addition to his legal wife. Son Kim Jong-nam, son Kim Jong-chul, son Kim Jong-un, and daughter Kim Yo-jong are the result of these connections.
Aboard December 17, 2011, he died of a heart attack on a train outside Pyongyang while on a domestic trip. From December 20 to 28, his remains was displayed in a glass casket at Kumsusan Memorial Palace for an 11-day period of sorrow. On December 28, 2011, he was embalmed, wrapped with a Workers’ Party of Korea flag, and interred at Kumsusan Memorial Palace after a two-day, 40-kilometer, three-hour funeral procession.
His birthday, February 16, is known as the “Day of the Shining Star” and has been proclaimed “the nation’s most auspicious occasion.”

Kim Jong-net Il’s worth was estimated to be $4 billion.