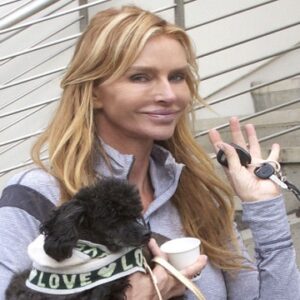 Kimberley Conrad is an American actress and model who rose to prominence as a result of her professional and personal involvement with the entertainment magazine ‘Playboy.’ She began her modeling career in Canada at a young age and established herself in the industry when she was pushed to pose for the ‘Playboy.’ She was quickly featured in the magazine, and in 1989, she was named ‘Playmate of the Year.’ During this period, she became acquainted with Hugh Hefner, the founder and publisher of Playboy, and married him. The couple married for nine years before splitting up and becoming legally divorced a little over a decade later. Kimberley Conrad has chosen to be a vegetarian. While in California, she was involved with PETA and worked on various animal rescue projects.

Association with Playboy and Ascension to Fame

Kimberley Conrad began modeling when she was seventeen years old. Kimberley Conrad established herself in the Canadian modeling market by working with John Casablancas’ (an American modeling agent) modeling firm, Elite Model Management, as part of her modeling assignments. John Casablancas’ Elite modeling agency asked her to model for the American men’s lifestyle magazine ‘Playboy’ around this time. She was named Playmate of the Month in the Playboy magazine in January 1988.

She was crowned ‘Playmate of the Year’ in 1989. Hugh Hefner, the creator and publisher of Playboy, married her the same year, which drew a lot of media attention. She changed the Playboy house into a conservative residence during the time she and her husband had two sons. After nine years of marriage, the couple divorced and began living separately, despite the fact that they did not legally divorce for the sake of their children.

Kimberley Conrad and her sons then moved into a new property near the Playboy mansion. She filed for divorce in 2009, when her youngest son Cooper became 18 years old, after 11 years of separation. In 2010, the divorce was finalized. Hugh Hefner has been paying her $250,000 every year as per their pre-nuptial agreement. According to reports, she launched a lawsuit against him in 2009 over a $5 million inheritance from the sale of a home they shared.

Kimberley Conrad was born in Alabama Moulton, Alabama, on August 6, 1962. She and her family moved to Reno, Nevada when she was four years old, and then to British Columbia, Canada when she was twelve years old. She married Hugh Hefner, the founder of Playboy, in 1989, and they were married until 2010.

Marston Glenn Hefner (April 9, 1990) and Cooper Bradford Hefner are the couple’s two children (September 4, 1991). She was rumored to have been in a relationship with British artist Rod Stewart around 1999. She was romantically linked to American artist Quincy Jones in 2005.

Kimberley Conrad is one of the wealthiest and most well-known actors. Kimberley Conrad’s net worth is estimated to be $1.5 million, according to Wikipedia, Forbes, and Business Insider.