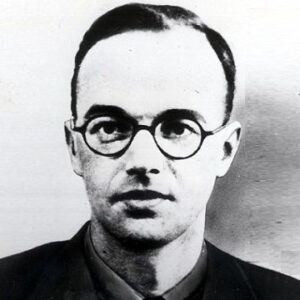 Emil Julius Klaus Fuchs was a theoretical physicist from Germany and one of the Soviet Union’s best atomic spies. During and after the Second World War, he sent important information from the British, American, and Canadian “Manhattan Project” to the Soviet Union. Rudolf Peierls hired him to help with the Tube Alloys project, which was Britain’s attempt to make an atomic bomb. There, he began spying for the Soviet Union and passed important project information to them through Ruth Kuczynski. He went to New York with Rudolf Peierls and worked at Columbia University on the “Manhattan Project.” He worked at the “Theoretical Physics Division” at the “Los Alamos National Laboratory.” He helped with a number of important theoretical calculations that led to the first nuclear weapons and the hydrogen bomb. After the war, he was in charge of the “Theoretical Physics Division” at Harwell, UK’s “Atomic Energy Research Establishment.” He was later found guilty of espionage, which he admitted to, and given a 14-year prison sentence. The end of his British citizenship. He was locked up for nine years and then let out and sent to East Germany. He was chosen to be a member of the “Socialist Unity Party of Germany central “‘s committee. Later, he was the deputy director of the Institute for Nuclear Research in Rossendorf. He has been given the “Order of Karl Marx,” the “National Prize of East Germany,” and the “Patriotic Order of Merit.”

He was born in Rüsselsheim, Grand Duchy of Hesse, on December 29, 1911. He was one of Emil Fuchs and Else Wagner’s two sons out of their four children. His father had been a priest.
After his family moved to Eisenach, he went to high school and took the Abitur exam.

His father was a member of the SPD (Social Democratic Party of Germany) since 1912. He taught theology at the University of Leipzig. Starting in 1930, he went to college and studied math and physics. There, he joined the student branch of SPD and got involved in politics among students. He also joined the Reichsbanner Schwarz-Rot-Gold, which is the SPD’s paramilitary group.

When his father started teaching religion at the “Pedagogical Academy” in Kiel, he moved to the “University of Kiel.”
In October 1931, his mother Else Wagner killed herself by drinking hydrochloric acid.
After he was kicked out of the SPD in 1932, he and all of his siblings joined the Communist Party of Germany (KPD).

Klaus Fuchs and Gerhard, his older brother, would often speak loudly in public. They would also disrupt meetings and gatherings of the “National Socialist German Workers’ Party” (NSDAP), whose presidential candidate for the March 1932 election was Adolf Hitler. During one of these fights, he was beaten up and thrown into the river.

After the Nazis took over and Adolf Hitler became Germany’s Chancellor in January 1933, he left Kiel and moved to Berlin.
After the Reichstag building in Berlin was set on fire on February 27, 1933, he stayed out of sight for five months because he thought that the opposition parties would be blamed for the incident.

Later, in September 1933, he ran away to Britain, and in October of the same year, he was kicked out of the “Kaiser Wilhelm Institute for Physics.”

During this time, the Nazi government did terrible things to his family, like putting family members in jail at different times.

In August 1939, he tried to become a British citizen. When the Second World War started in September 1939, Klaus Fuchs was sent to the Isle of Man by the police in the middle of 1940.
In July 1940, he was sent to a prison camp in Sherbrooke, Quebec, Canada. Max Born helped get him out of jail, and he was back in Edinburgh by the beginning of 1941.

Rudolf Peierls of the “University of Birmingham” asked him to help with the “Tube Alloys” project, which was Britain’s atomic bomb project. This was in May 1941.
He became a British citizen on August 7, 1942, and signed a form under the “Official Secrets Act.” Klaus Fuchs started living with Rudolf and Genia Peierls.

When he realized how important the scientific work was, he talked to Jurgen Kuczynski, a teacher at the “London School of Economics.” Jurgen Kuczynski then put him in touch with Simon Davidovitch Kremer. Kremer, whose code name was “Alexander,” was the secretary to the military attaché at the Soviet Union’s embassy. The military attaché worked for the “Red Army’s” foreign military intelligence directorate, which was called “Glavnoye razvedyvatel’noye upravleniye” (GRU).

He sent important information to the Soviet Union through Ruth Kuczynski, who was an experienced Soviet agent by that time. “Sonia” was her code name.

He went to New York with Rudolf Peierls to work on the “Manhattan Project” at Columbia University with Peierls. At that time, he went by the code name “Rest.” As soon as he moved to the United States, the Soviet Union’s civilian intelligence agency, the “NKGB,” took over the power that was given to him in Britain.

From May 1944 on, he went by the code name “Charles.” In August of that year, he started working at the Los Alamos National Laboratory in the “Theoretical Physics Division” under Hans Bethe. He helped with some critical theoretical calculations that Edward Teller wouldn’t do because he wasn’t interested.

His method, called the “Fuchs-Nordheim,” is still used, and his report on blast waves is still good. He and John von Neumann put in for a patent that showed how to make a thermonuclear weapon with a trigger that causes it to explode.

At that time, Harry Gold, whose code name was “Raymond,” was his main courier. Early in 1944 was the first time the agent talked to him. Klaus Fuchs gave the Soviet Union the information he had learned about how bombs work and how they are made.

On July 16, 1945, he was one of many scientists from Los Alamos who went to the “Trinity Test.”
Even though the US’s Atomic Energy Act of 1946 made it hard to share information about nuclear research without official permission, it did give the Soviet Union and Britain important information.

After the war, in August 1946, the British asked him to go back to Britain so they could use him in their nuclear weapons program. He got a job as the head of the “Theoretical Physics Division” at the “Atomic Energy Research Establishment” in Harwell.

Between the end of 1947 and May 1949, he gave several important pieces of information to the Soviet spy Alexander Feklisov. These include information about the development of the hydrogen bomb and the making of uranium-235.
In 1947, he went to a meeting of the “Combined Policy Committee.” This group was set up to make it easier for the governments of Britain, Canada, and the US to share secret information about atoms.

The “United States Army Signal Intelligence Service”Venona” “‘s project, which was a counter-intelligence program, told the “GCHQ” in September 1949 that Klaus Fuchs was a spy.

When he was first asked about this by an MI5 officer, William Skardon, in December 1949, he denied it. However, in an interview set up by William Skardon in January 1950, he admitted to being a spy.
The American and British intelligence agencies were able to catch another spy, Harry Gold, because of what he said.

Lord Goddard gave him the maximum sentence for espionage, which was 14 years in prison, on March 1, 1950. In December of that year, he also stopped being a British citizen.

On June 23, 1959, he was let out of prison after being locked up for nine years. He was sent to Dresden, which was in East Germany. After that, he went back to his scientific work.

He was on the central committee of SED and on the “Academy of Sciences.” He became the deputy director of the “Institute for Nuclear Research in Rossendorf,” a job he held until 1979.

In 1959, he married his longtime friend, German politician, and KPD member Margarete (Grete) Keilson.
He died on January 28, 1988, and his body was put to rest in Berlin’s “Friedrichsfelde Cemetery.”

Klaus is one of the most popular criminals and one of the richest criminals. Based on what we’ve learned from Wikipedia, Forbes, and Business Insider, Klaus Fuchs is worth about $1.5 million.