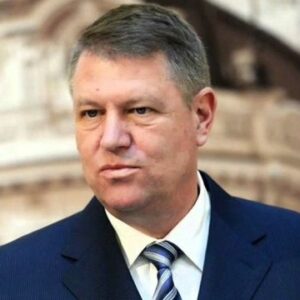 Since December 21, 2014, Klaus Iohannis (sometimes spelled Johannis) has been the President of Romania. He was elected president after a shock victory in the 2014 presidential election, with 54.43 percent of the vote. He was the leader of the Democratic Forum of Germans in Romania from 2002 until 2013, before to becoming president. He worked as a physics teacher and a school inspector before becoming a full-time politician. His first significant political win occurred in 2000, when he was elected mayor of Sibiu on behalf of the Democratic Forum of Germans in Romania. In this capacity, he assisted in the transformation of the city into one of Romania’s most popular tourist attractions, an accomplishment that gained him the locals’ trust and admiration. He also strengthened local administration and built relationships with foreign politicians and investors. He was re-elected by landslides in 2004, 2008, and 2012, despite being a popular mayor. With time, his political ambitions rose, and he joined the National Liberal Party in 2013, eventually becoming the party’s president. In 2014, he ran for president as the party’s main candidate, defeating his opponent, Prime Minister Victor Ponta, by a large margin to become the country’s president.

Susanne and Gustav Heinz Johannis gave birth to Klaus Werner Johannis on June 13, 1959, in Sibiu, Romania. Krista Johannis is his younger sister. His father worked as an enterprise technician, and his mother worked as a nurse.
He earned his bachelor’s degree in physics from the Babeș-Bolyai University’s Faculty of Physics in Cluj-Napoca in 1983.

He went on to serve as a high school physics teacher at a variety of schools and institutions. He worked at the Samuel von Brukenthal Gymnasium in Sibiu, Romania’s oldest German-speaking school, from 1989 to 1997.

Politics had always piqued Klaus Iohannis’s interest. From 1990 to 1997, he was a member of the Democratic Forum of Germans in Romania (FDGRboard )’s of education in Transylvania.

In the year 2000, he made his first significant political achievement. He was chosen as a candidate for mayor of Sibiu by the FDGR. He received 69.18 percent of the vote in the election, making him the first ethnic German mayor of a Romanian city since Albert Dörr, who served from 1940 to 1945.

He began working to improve the city, which was on the verge of collapse, as soon as he took up the position. He started by improving the infrastructure and instituting administrative reforms.

His commitment and hard work earned him popularity, and he was comfortably re-elected in 2004. He continued the fantastic work he began during his first term by restoring the city and transforming it into one of Romania’s most popular tourist destinations.

Sibiu, along with Luxembourg, was named European Capital of Culture in 2007. His popularity has grown to the point where he won 87.4 percent of the vote in the 2008 mayoral race. In 2012, he would also win re-election.

In 2009, President Traian Basescu was approached by a grand coalition consisting of the National Liberal Party (PNL), the Social Democratic Party (PSD), and the Hungarian Democratic Union (UDMR) to nominate Iohannis as Prime Minister. Basescu turned down the offer.

Klaus Iohannis, a powerful politician, joined the PNL in 2013. He was quickly voted as the PNL’s vice president, then in June 2014, he was elected President with 95% of the vote.

His presidential campaign, which he ran as an honest and upright politician, centered on fighting corruption and strengthening the justice system. He also gained backing from prominent politicians such as former Romanian President Trajan Basescu and German Chancellor Angela Merkel.

Klaus Iohannis won the presidential election with 54.43 percent of the vote, defeating his opponent, Prime Minister Victor Ponta, by a large margin. On December 21, 2014, he was sworn in as Romania’s 5th President.

He is focused on strengthening legislation and the justice system as president, as well as developing a strong pro-Western foreign policy. He has been to nations such as France, Germany, Poland, Italy, Spain, the United States, and Israel to meet with heads of state and other notable political people.

As Mayor of Sibiu, he was instrumental in transforming the city from obscurity to one of Romania’s most famous tourist attractions. To turn the city into a prominent tourist destination, he improved the city’s infrastructure and tightened the administration. In 2007, the city was named European Capital of Culture, making him a national figure.

In 1989, Klaus Iohannis married Romanian Carmen Lăzurcă. His wife is a teacher of English. The couple does not have any children.

Klaus Iohannis is one of the wealthiest world leaders and one of the most popular. Klaus Iohannis’ net worth is estimated to be $1.5 million, according to Wikipedia, Forbes, and Business Insider.