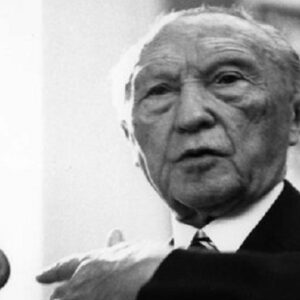 Konrad Adenauer was Germany’s first Chancellor following World War II, and in this capacity, he was instrumental in rebuilding the nation from the war’s ruins. Often referred to as “Der Alte” (“the old man”), he was elected chancellor in his seventies. However, he never let his age stand in the way of serving his beloved country, which he assisted in rebuilding from a war-ravaged region to an industrialized and prosperous nation. Germany became a democracy and achieved stability and economic prosperity under his leadership and guidance. He also gained notoriety for forging close ties with formerly adversarial nations and for reestablishing Germany’s international standing. As a qualified lawyer, he developed an early interest in politics and became active in the Cologne city council, eventually becoming Mayor of Cologne. He was an outspoken and audacious individual who opposed Hitler and the Nazi Party and was forced to maintain a low profile for years out of fear of persecution. Nonetheless, he was apprehended and detained in a concentration camp, but miraculously survived the war. He was elected as Germany’s first Chancellor following the war and played a critical role in the country’s reconstruction.

Konrad Adenauer was born in Cologne, Rhenish Prussia, on 5 January 1876 to Johann Konrad Adenauer, a lawyer and Cologne civil servant, and his wife Helene. He was one of four siblings.

He was in poor health as a child and was turned down for military service at the age of twenty. He earned degrees in law and politics from the universities of Freiburg, Munich, and Bonn in 1900.

Following his graduation, Konrad Adenauer began working as a lawyer at the Cologne court. He joined the German Centre Party, a Catholic political party, in 1906 as a devout Christian.

In 1909, he was elected Vice-Mayor of Cologne and Mayor in 1917. He served as Mayor until 1933 and also held the position of President of the Prussian state Council. As mayor, he oversaw the construction of new port facilities, a green belt, sports fields, and exhibition venues.

In 1933, Adolf Hitler’s Nazi Party came to power, and the city council of Cologne and the Prussian parliament were dissolved. Adenauer’s position as mayor was rescinded, and his bank accounts were frozen.

For him, life in Nazi Germany was hell, and he initially struggled to survive. Throughout the 1930s and 1940s, he attempted to maintain a low profile in order to avoid persecution by the Nazis.

In 1944, an unsuccessful assassination attempt on Hitler resulted in Adenauer’s arrest and detention in a concentration camp.

Eventually, in late 1944, he was released from prison. He was restored to his former position as mayor of Cologne following the war’s conclusion. He was, however, relieved of this position in 1945.

He became involved in the formation of a new political party, the Christian Democratic Union, following his dismissal as mayor (CDU).

By bringing Roman Catholics and Protestants together, he hoped to bury the divisions between the two Christian denominations and present a united front against Nazism. In 1946, he was elected chairman of the party.

After becoming Chancellor, he set about rebuilding Germany from the ruins left by World War II. He concentrated his efforts on establishing a sovereign democratic state in Germany.

He established himself as a popular Chancellor and was easily re-elected to the post three times (1953, 1957, and 1961). He resigned in 1963 as a result of the “Spiegel affair” scandal and was succeeded by Ludwig Erhard. Adenauer retired at the age of 87.

Konrad Adenauer is best remembered for his role in reestablishing a politically stable and economically prosperous Germany following World War II. He was widely admired for his unwavering commitment to democracy and his role in establishing close ties with other European nations.

In 1953, ‘Time’ magazine named Adenauer Man of the Year. He was also awarded the Grand Cross of the Italian Republic’s Order of Merit, the Order of the Southern Cross (Brazil), and the Order of the Sun in the same year (Peru).

In 1954, he was awarded the Charlemagne Prize for his role as a “forceful promoter of a united Europe.” He received the Grand Decoration of Honour in Gold with Sash for Services to the Republic of Austria in 1956.

In 1904, he married Emma Weyer. This marriage resulted in the birth of three children and ended in Emma’s untimely death in 1916.

In 1919, he married Auguste Zinsser. His second marriage lasted nearly three decades and resulted in the birth of five additional children. Auguste’s death in 1948 left him a widower once more.

On 19 April 1967, Konrad Adenauer died. He was given a state funeral in Cologne Cathedral, which was attended by a large number of German and foreign dignitaries, including then-US President Lyndon B. Johnson.

Konrad is one of the wealthiest World Leaders and is ranked on the list of the most popular World Leaders. Konrad Adenauer’s net worth is estimated to be between $1-5 million, based on our analysis of Wikipedia, Forbes, and Business Insider.