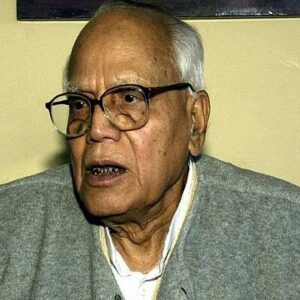 Krishna Prasad Bhattarai was a well-known Nepalese politician who served twice as the country’s Prime Minister. He was a former journalist who was one of the political leaders who helped Nepalese politics move from absolute monarchy to multi-party democracy. He was the head of the armed movement that overthrew the Rana monarchy in Nepal’s eastern area and brought democracy to the country. He was a founding member of the Nepali Congress Party (NCP) and served for 26 years as its leader. In 1990-1991, he led an interim government before becoming Prime Minister of Nepal for the second time in 1999-2000. During his time as Prime Minister of Nepal, the Nepalese constitution was promulgated (1990), and Parliamentary elections were held in 1990. Krishna Prasad Bhattarai transformed Nepal’s face and gave the country a new direction.

Krishna Prasad Bhattarai was born in Varanasi, India, on December 24, 1934, to Sankata Pd. Bhattarai and Lalita Devi.
He graduated with a bachelor’s degree in economics and went on to work as a journalist.

Bhattarai began his career as a reporter. He was one of the few international journalists to interview Nikita Khrushchev, the Communist Party of the Soviet Union’s General Secretary.
After joining the fight to overthrow the Rana dynasty’s 104-year rule, Bhattarai became an active participant of Nepalese politics.
He was a founding member of the Nepali Congress Party, which launched an armed revolt against the Rana dynasty in Nepal. He was the Gorkha district commander of the Congress Mukti Sena.
Numerous people supported the armed revolution of the Nepali Congress, including King Tribhuvan (who was in exile) and many Indian and Burmese Marxists.
With the collapse of the Rana dynasty on February 18, 1951, the fight came to a conclusion. In Nepal, this day is commemorated as Democracy Day.
At the age of 36, he became Speaker of the lower house of parliament, but after the coup of 1960, he was imprisoned for eight years at the Sundarijal Military Detention Camp.
On February 12, 1976, he was nominated as the NPC’s officiating president by then-party supremo BP Koirala. Later, at the Nepali Congress’s Eighth National Conference in January 1992, he was elected President of the NPC.
Following the Jana Andolan (People’s Movement) of 1990, he was appointed Prime Minister of the interim government for a year. The Panchayati government, which had been in place for 30 years, came to an end as a result of this campaign.
From May 1999 to March 2000, he was re-elected Prime Minister.

Krishan Prasad Bhattarai was born into a politically powerful Gorkha district family. Both his immediate and ancestor families are Gorkha natives.
Bhattarai never married, but he treated his brother’s six children as his own. None of his successors are currently involved in Nepalese politics.
Bhattarai, one of the founding members of the Nepali Congress, died on March 4, 2011 at the Norvic International Hospital in Kathmandu, at the age of 77.
Before his death, he was suffering from chronic bronchitis, chronic renal failure, and congestive heart failure.
In his honor, the Bhattarai Ashram was erected in Nepal. After the coup of 1960, Bhattarai was imprisoned at the Sundarijal Military Detention Camp for eight years without being tried.
Bhattarai predicted that he will live for a hundred years before taking his final breath. He died at the age of 86.
The authorities kept the news of his death under wraps for at least a day.