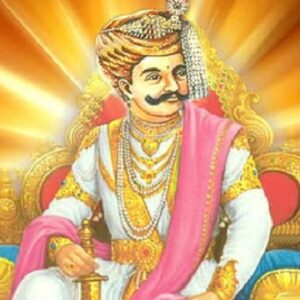 Krishnadevaraya was a powerful emperor of South India’s Vijayanagara Empire. As the third emperor of the Vijayanagara Empire’s Tuluva Dynasty, he expanded the empire to include most of South India, including present-day Karnataka, Northern Tamil Nadu, and Andhra Pradesh, as well as Cuttack in the northeast. He ascended the throne during the empire’s most critical period and went on to establish it as a thriving empire. He was a key figure in the downfall of the Bahmani Sultans and the Portuguese, who were forced to abandon their intentions to expand their kingdom beyond their borders. He overcame the Bahmani Sutans with the help of his prime minister and tutor, Timmarusu, and conquered their fortresses of Bidar, Gulbarga, Raichur, and Bijapur. He conducted a large campaign against the Odisha Gajapatis, seizing and capturing the fortifications of Udayagiri, Kondavalli, and Kondavidu in the process. Due to his spectacular achievements and exceptional ability to preserve political stability in the Deccan, he is frequently likened to Asia’s and Europe’s greatest rulers. He was given various titles as a symbol of appreciation for dominating the three most powerful provinces in India’s southern peninsula, including ‘Kannada Rajya Rama Ramana’ (Lord of the Kannada empire), ‘Andhra Bhoja,’ and ‘Mooru Rayara Ganda’ (King of three Kings).

In 1509, he gained the king and formed a close bond with the empire’s Prime Minister, Timmarusu, whom he regarded as a father figure.

He was crowned during the darkest phase of the Vijayanagara Empire, and spent the first few years of his reign fighting sieges and conquests in order to consolidate the country.

Because the Portuguese dominated the maritime trade along the Indian coast, he established cordial connections with them and began trading Arabian horses and weapons with them.

Apart from receiving weaponry and war equipment for conquering Raichur, he enlisted the help of Portuguese engineers to improve the water supply in Vijayanagara City.
Vijayanagar was spared from annual assaults by the Deccan sultans with the fall of the Sultan of Bijapur, Sultan Mahmud, in 1509 at his hands.

He captured Raichur Doab and then raided Bidar, Gulbarga, and Bijapur, dissolving the Bahmani Sultans and assuming the title of “establisher of the Yavana empire.”
He conquered regions up to the Krishna River by suppressing the local kings, the Reddys of Kondavidu and the Velamas of Bhuvanagiri.

To expand his power, he beat the Ummatur leader, Ganga Raja, in 1512; as a result of this defeat, the latter perished in the Cauvery River. The territory was annexed to the province of Srirangapatna.

Following his successful invasion of the Udayagiri Fort, he beat the Gajapati army at Kondavidu and conquered the fort after a series of first routs, forcing the army to surrender.

While Timmarusu, who was then appointed governor of Kondavidu, stormed the fort by a hidden entrance discovered by him, Prince Virabhadra, the son of Prathapa Rudra, was arrested and imprisoned.
He seized Bezwada, on the banks of the Krishna River, as part of his third campaign in South India, followed by the invasion of Kondapalli and forts at Nalgonda and Warangal.

Prathapa Rudra’s attempt to defeat Krishnadevaraya and his army was thwarted when he attacked Cuttack, the capital of the Gajapati Empire, forcing the latter to surrender.

In 1518, a treaty was formed that gave the Gajapati ruler the territories in the Odisha kingdom north of the Krishna River while ensuring perfect peace between the two empires.

He destroyed the fort of Gulbarga, the previous Bahmani capital, after destroying the Bijapur army, albeit he restored the kingdom to Muhammad Shah.

He succeeded in expanding his empire to South India by invading and conquering the various territories of the Bahmani kingdom.

His reign is considered as the golden age of Telugu literature, but Sanskrit, Kannada, and Tamil literates were also patronized, because to his strong regard and support for art and Telugu literature.

In 1512, he invaded Gajapati Prathapa Rudra Dev’s unconquerable Udayagiri Fort, and after a year of incessant fighting, the Gajapati army surrendered and fled to Kondavidu.

Tirumala Devi and Chinnama Devi were his wives.
As part of the peace pact negotiated by the two rulers to establish peace and harmony on both sides of the Krishna River, he married Prathapa Rudra’s daughter, Princess Annapurna Devi, who became his third queen.

He contributed various valuable things to the Venkateswara Temple, including a jewel-studded golden sword and diamond-encrusted crowns, because he was a fervent disciple of Lord Tirumala of Tirupati.

In 1524, he named his son Tirumala Raya as Yuvaraja, but the crown prince did not live long enough to carry on his father’s heritage, dying of poisoning.

Because Timmarusu’s son was suspected of poisoning his son, he blinded both Timmarusu and his son.
He appointed his half-brother Achyuta Deva Raya as his successor and died in 1529 following a grave illness.

The estimated net worth of Krishnadevaraya is unknown.