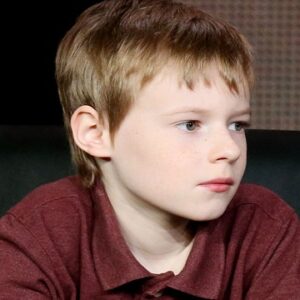 Kyle Catlett is a child actor and voice artist from the United States. In 2009, he gained notoriety for his cameo appearance as Henry Morton in the television medical drama series ‘Mercy.’ He is best recognized for playing Joey Matthews in Kevin Bacon’s television series ‘The Following.’ He also appeared on CBS’ ‘Unforgettable’ in an episode. He made his big screen debut in the film ‘The Young and Prodigious T.S. Spivet,’ in which he played the title character. In the award-winning short film ‘The Pale of Settlement,’ he played the role of Moische. In the 2015 version of ‘Poltergeist,’ he played Griffin Bowen. ‘The Tick’ and ‘Bread and Games’ are two of his forthcoming projects as of May 2017. Kyle is trilingual, speaking English, Russian, Chinese, and French fluently, as well as having a working knowledge of Spanish and Latin. Once a week, he went to Chinese language studies at a Chinese school and gave a Chinese-language interview to ‘DingDing TV.’ His mother taught him Russian. Catlett has a little social media following. On Twitter, he has slightly over a thousand followers, and on Instagram, he has 700 followers. He hasn’t been active on either account in a long time, owing to his dedication to his art and profession.

Kyle Catlett’s first acting role occurred when he was only six years old. In the NBC sitcom ‘Mercy,’ he played Henry Morton in the episode ‘The Last Thing I Said Was.’ On November 4, 2009, the episode aired. He made his second appearance on television two years later, in the episode ‘Heroes’ of CBS’ police procedural crime drama series ‘Unforgettable,’ in which he played Max Seiferth.

He attended his first ‘Sundance Film Festival’ in 2012, along with the cast of ‘The Fort,’ a short film in which he had a role. In Fox’s ‘The Following,’ he played Joey Matthews, the son of the character Joe Caroll, and got his debut. The series also featured Shawn Ashmore, Natalie Zea, and Valorie Curry, among others, in addition to Catlett, Bacon, and Purefoy. The series debuted on January 21, 2013, and ended on May 18, 2015. Catlett appeared in all 15 episodes of the first season as a regular. Despite the fact that the show was canceled after four seasons, his performance was well-received, and it provided him with enough impetus to move forward with his career.

Director Jean-Pierre Jeunet (of Amélie fame) was looking for a little actor with “magical” qualities when auditioning for the character of cartography prodigy Tecumseh Sparrow Spivet. “I don’t want someone cute; he has to have something exceptional,” he remarked in an interview with ‘The Star.’ It’s difficult to put into words, but you can’t help but have goosebumps when you watch the kid. You must fall head over heels in love with him.” Jeunet finally cast Kyle Catlett sometime in mid-2012 after a months-long international search. “It’s always the same tale,” Jeunet told ‘IndieWire’ about his protagonist. You see thousands of children and then, all of a sudden, you are confronted with a surprise, delivered via Skype, of course.

‘He’s too small, too little, too young,’ I thought at first. ‘He isn’t T.S. Spivet,’ says the narrator. “But when you have a kid who is a world champion in martial arts, speaks five languages, and can cry on command, you go, ‘Oh my God, this is an unusual kid,'” he continued. ‘I must meet him!’ He gradually changed his name to T.S. Spivet.” Helena Bonham Carter, Judy Davis, and Callum Keith Rennie also starred in the film. Catlett was nominated for a ‘Young Artist Award’ for his performance. His grasp of the French language came in handy when speaking with Jeunet’s mostly-French crew.

In 2013, Catlett earned the best actor prize at the ‘Greenville International Film Festival’ for his role in the Russian-language short film ‘The Pale of Settlement,’ in which he played Moische, a ten-year-old Jewish kid who avoids forced recruitment into the Russian Army during the Crimean War. For his role as Griffin Bowen in the supernatural horror film ‘Poltergeist,’ he won his second ‘Young Artists Award’ nomination. Despite being critically lambasted, the film was a moderate box office success. In 2016, he voiced Jim in the animated film ‘The Angry Birds Movie.’ In the much-anticipated reimagining of ‘The Tick,’ he will play Young Arthur. On August 25, 2017, the show will premiere on Amazon Prime. ‘Bread and Games,’ in which he co-stars with Luis Guzmán and Phil Burke, is another of his 2017 endeavors.

Catlett was born on November 16, 2002, in the state of New Jersey, United States of America. Leya, his younger sister, is a child actress as well. She played Moische’s sister in ‘The Pale of Settlement,’ which she co-starred in with Kyle. Catlett is a dedicated martial artist who had won the Kung Fu world championship three times by the time he was ten years old.

As per the sources, this child actor has a net worth of $1.5 Million but his salary is not revealed yet.