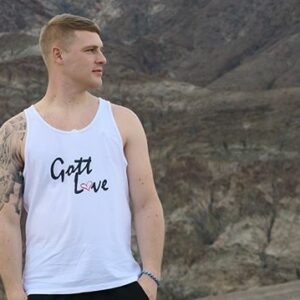 Kyle Gott is a popular YouTuber, Vlogger, and social media figure. He is a Senior Airman in the United States Air Force by profession. He has demonstrated a fine balance between his profession and his interest, demonstrating that if one remains focused and dedicated to their work and passion, the balancing act will take care of itself. He enjoys using his social media platform to share his experiences and journey as a member of the United States Air Force, encouraging and informing thousands of young people interested in the field. He didn’t have many subscribers at first, but that didn’t stop this attractive man from continuing to publish videos. His patience paid off, as his posts soon began to gain traction. Initially, he launched many YouTube channels, and as his popularity and viewership expanded, so did the number of subscribers. ‘SINGLE MILITARY PAY,’ one of his most popular videos, continues to receive a lot of attention. He vlogs with his wife, Makenna Gott, on his Vlogging channel, and the duo uploads footage of their travels, adventures, and more.

Gott was thrilled to receive his first tape-based camcorder in 2005, when he was in his early teens, and he was soon immersed in the world of YouTube. He began by uploading footage to this video-sharing website and creating multiple channels, all while upgrading his cameras. He launched his current channel, ‘Kyle Gott,’ in October 2011. He followed his heart to serve the country, especially after witnessing the ramifications of the terrorist attack on the ‘Twin Towers’ on September 11, 2001, when he was in fourth grade. In order to pursue this goal, he decided to enlist in the military. This young man was determined to join the Air Force and landed in the Military Entrance Processing Station in Iowa, where he received an 82 on the ASVAB multiple-aptitude battery, but a vision test revealed his partial color blindness, which eliminated him from 80 percent of the jobs he was qualified for. With a strong desire to serve his country, he eventually joined the United States Air Force as an Aircraft Structural Maintainer. Kyle Gott’s YouTube account features posts on his life and experiences in the United States Air Force, beginning with his first day.

Although his early YouTube posts received little attention, with only 16 subscribers in the first year, this did not dampen the spirit of this young man, who continued to publish new videos. His posts eventually gained traction, and his YouTube channel now has over 90,000 subscribers. He uploaded a video titled ‘SINGLE MILITARY PAY’ on June 30, 2014, which has already received over 350,000 views and has become one of his most popular. Gott began Vlogging with his wife, Makenna Gott, on November 14, 2014, after gaining notoriety on YouTube. They began recording videos about their lives and interests. Their channel, ‘GottLove,’ currently has over 45,000 subscribers and 5,440,000 views. On August 24, 2016, he received word of his promotion to Staff Sergeant, which he will begin between May and August 2017.

Behind the Scenes of Kyle Gott Bio

Estimated Net Worth of Kyle Gott

Kyle is one of the wealthiest YouTube stars and one of the most popular. Kyle Gott’s net worth is estimated to be $1.5 million, according to Wikipedia, Forbes, and Business Insider.