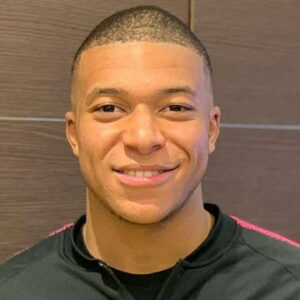 Kylian Mbappé is a professional footballer from France who is best recognized for his performance at the 2018 FIFA World Cup. Mbappé made history by being the youngest Frenchman to score in a ‘World Cup.’ He scored four goals during his ‘World Cup’ campaign, earning him the ‘FIFA World Cup Best Young Player Award.’ Arsène Wenger, a former Arsenal player, has regarded him as a “great football talent.” Thierry Henry and Pelé have both been compared to him by the media. Mbappé is known for his dribbling abilities, as well as his agility, creativity, and acceleration when in possession of the ball. Mbappé signed a €180 million contract with the French football club ‘Paris Saint-Germain’ in 2017, making him the world’s second-most expensive player.

Kylian Mbappé Lottin was born in Bondy, Paris, France, on December 20, 1998, to Wilfried Mbappé and Fayza Lamari. He is of mixed heritage because his father is Cameroonian and his mother, a former handball star, is Algerian. Mbappé began playing football at the age of six at ‘AS Bondy,’ where he was coached by Antonio Riccardi and his father Wilfried. He subsequently went to the ‘Clairefontaine’ national football center, which specializes in training young French players.

World-famous clubs such as ‘Real Madrid,’ ‘Manchester City,’ ‘Bayern Munich,’ and ‘Liverpool’ were impressed by Mbappé’s performance at ‘Clairefontaine.’ When he was barely 11 years old, he traveled to London to play for Chelsea’s young squad against ‘Charlton Athletic.’ He subsequently selected to play for ‘AS Monaco FC,’ a team that participates in the Ligue 1 football league in France.

Mbappé made his first appearance for ‘Monaco’ in a ‘Ligue 1’ match against ‘SM Caen’ on December 2, 2015. He shattered Thierry Henry’s record by making his first-team debut at the age of 16 and became Monaco’s youngest-ever first-team player. On February 20, 2016, he scored his first goal for ‘Monaco,’ making him the club’s youngest goal-scorer. Mbappé signed a three-year contract with ‘Monaco’ on March 6.

In a game against ‘Stade Rennais’ in the ‘Coupe de la Ligue,’ he scored his first hat-trick for Monaco’s first team on December 14, 2016. He got his first hat-trick in ‘Ligue 1’ on February 11, 2017, when his team defeated ‘Football Club de Metz.’ Since Jérémy Ménez in 2005, he became the youngest player in ‘Ligue 1’ to score a hat-trick. He became the second-youngest French football player to score in the ‘UEFA Champions League’ on February 21. He scored two goals against ‘FC Nantes’ on March 5 to assist his team win. He scored a goal against ‘FC Girondins de Bordeaux’ on March 11, ensuring a 2–1 victory for ‘Monaco. He helped ‘Monaco’ advance to the quarter-finals of the ‘UEFA Champions League’ on March 15. In the second leg of the event, he scored a goal to assist his team advance to the semi-finals. ‘Juventus’ finally knocked ‘Monaco’ out of the ‘UEFA Champions League.’ His club, however, won the ‘Ligue 1’ title, with Mbappé scoring 26 goals.

‘Paris Saint-Germain’ confirmed on August 31 that Mbappé had signed a loan deal with the club. On September 8, he made his debut for ‘Paris Saint-Germain,’ scoring a goal in a victory over ‘Metz.’ When he scored against ‘Bayern Munich’ on December 6, he became the youngest player to score a tenth ‘Champions League’ goal.

Mbappé was appointed to the national squad for the 2018 ‘FIFA World Cup’ on May 17, 2018. On June 21, he scored his first ‘World Cup’ goal, which helped France defeat Peru in a ‘Group C’ encounter. He was named ‘Man of the Match’ on June 30 after assisting France to a victory over Argentina. He became the second youngster after Pelé to score twice in a ‘World Cup’ match during the game. He scored a goal in the ‘World Cup Final’ against Croatia on July 15 to help France win the famous championship. He also made history by becoming the second youngster to score in a ‘World Cup Final.’ Mbappé earned the ‘Best Young Player Award’ for his outstanding performance during the ‘World Cup.’ He was sent off the field in a game against ‘Nîmes Olympique’ on September 1, 2018, after receiving his first red card in his career. He became the youngest player in ‘Ligue 1’ history when he scored four goals against ‘Olympique Lyonnais’ on October 8.

The ‘National Union of Professional Footballers’ (UNFP) awarded him the Ligue 1 Young Player of the Year title for his outstanding performance during the 2016–17 season. In the next season, he earned the prize once more. He was awarded the ‘Golden Boy’ award by sports journalists every year in 2017. In the same year, he was named the eighth best player in the world by the ‘Union of European Football Associations’ (UEFA). He was awarded the ‘UNFP Player of the Month’ title in April 2017. In March and August of 2018, he earned the same trophy.

The ‘Fédération Internationale de Football Association’ named him the fourth best player in the world in 2018. (FIFA). He was named to the ‘FIFA World Cup Dream Team’ and the ‘IFFHS Men’s World Team’ as a result of his outstanding performance in the ‘World Cup.’ He was awarded the ‘Kopa Trophy,’ which is granted to the finest player under 21 years old. He was also named ‘French Player of the Year’ (2018).

Jirès Kembo Ekoko is Kylian Mbappé’s older brother. Mbappé’s father adopted Ekoko, a professional football player, when he was a child. Ethan Mbappé, Mbappé’s younger brother, is also a soccer player. Mbappé’s mascot in one of the ‘Champions League’ games was Ethan, who has played for the under-12 ‘Paris Saint-Germain’ club.
Ethan has influenced Mbappé’s goal-celebration technique. He mentioned in one of his interviews that his younger brother would celebrate in a similar manner if he beat him in EA Sports’ ‘FIFA’ video game.

Mbappé has a history of charity endeavors. On February 22, 2018, he met with FIFA President Gianni Infantino, French President Emmanuel Macron, Liberian President George Weah, and former professional footballer Didier Drogba. The conference, which took place at Paris’s ‘Élysée Palace,’ was about a sports development project in Africa. Mbappé noted his father’s African roots in an interview and stated that the growth of sports in Africa is important to him.

Kylian Mbappé has a net worth of $95 million.