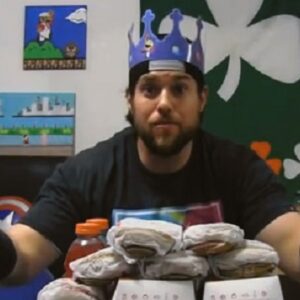 The professional competitive eater, YouTuber, and social media star known online as L.A. Beast is Kevin Thomas Strahle, a native of New Jersey. The tall, lean man has twice been named one of the top professional eaters in the world. He gained popularity as a result of the good feedback he received for his performance of the “Milk Chugging Challenge” in a YouTube video. He was inspired by this in 2010 to start his own YouTube channel. Since then, he has racked up 1.8 million followers and over 263 million total views on the channel. He has 174k followers on Facebook, 60.2k followers on Instagram, and 99.2k followers on Twitter. Additionally, he has a number of Guinness World Records. He has made appearances on the TV series “Tosh. O.,” “The Today Show Australia,” and “The Tonight Show with Jay Leno” as a result of his rising fame on the internet and elsewhere. He is connected to the Otter Media-owned Fullscreen network.

The “Fatburger XXXL Challenge” was the first challenge L.A. Beast ever successfully finished. His friend recorded and uploaded a video of his “Milk Chugging Challenge,” and after seeing the good feedback, he decided to start making YouTube videos as a weekend hobby. He started looking for fresh tasks to take on. A friend disguised as Eeyore (from “Winnie-the-Pooh”) kicked him while his mouth burned from eating a ghost pepper, and he downed fifty raw eggs in one sitting and managed to finish the “Cinnamon Challenge” without spitting it out. He first experienced widespread fame with the last one. The King of YouTube, Ray William Johnson, did a segment on him.

He was also featured on MTV and truTV, and he quickly rose to great fame. The L.A. Beast moniker was first used by Kevin Strahle in 2011, and it quickly gained popularity. A former college teammate who suggested he pursue competitive eating got in touch with him on August 15, 2011. He entered the “Wild Turkey 81 Eating World Championship” in New York City because he was intrigued by the possibilities. Even though he finished last, it gave him a sense of purpose in life.

At the 2012 Nathan’s Famous Hot Dog Eating Contest qualifier in Cleveland, Ohio, he consumed 25 hot dogs in only ten minutes. He competed in the same year’s “World Cupcake Eating Championship.” In recognition of his accomplishments, he was listed as the 16th greatest professional eater in the world in the year after. As a test, Strahle drank Crystal Pepsi that was 20 years old in February 2013. He eventually used that as motivation to launch a successful campaign to bring the beverage back in 2015. Together with fellow competitive eaters Tim Brown, Bob Shoudt, Patrick Bertoletti, and Takeru Kobayashi, Strahle consumed an entire goat in September 2015 to end the ‘Chicago Cubs Curse,’ which had persisted for 70 years. The very following year, the Cubs won the World Series.

He had a very busy month of May 2017 overall. Within ten days, he broke four new “Guinness Book World Records”! He surpassed the previous record of 531 grams on May 3 by eating 642.12 grams of chicken nuggets in three minutes. On the same day, he set his second record by consuming 121.90 grams of Bhut Jolokia peppers in two minutes. On May 13, he set two other records: “the fastest time to drink a bottle of maple syrup” and “the most powdered doughnuts eaten in three minutes” (10.84 seconds).

In Ridgewood, New Jersey, on January 6, 1984, Kevin Strahle was born. He has three sisters, one of whom is Liz. His mother taught in a public school, and his father worked for PepsiCo. He joined the football team at Ridgewood High School since he was a physically strong child growing up. After graduating, he joined the Fordham Rams football team at Fordham University in New York, where he spent four seasons starting virtually exclusively on the offensive line. He began working as a bouncer in the New York City neighborhood of the Bronx while still a student. He majored in history and minored in business, and he earned his degree in 2006. At Budweiser, he was hired as a sales representative.

He relocated to Los Angeles, California, in 2008 and started a job with Pepsi. Two years later, when the recession hit and he realized his wages wasn’t enough to maintain himself, he left his minimal wage job. With his parents, he relocated back. He returned to his prior position at Budweiser as well. In 2011, he relocated to Los Angeles once more, but in October 2016, he went back to New Jersey. Strahle claimed that his grandmother, who frequently visited and prepared meals for him, was the only one who had any influence on his ability to acquire an appetite.

The estimated net worth of L.A. Beast is unknown.