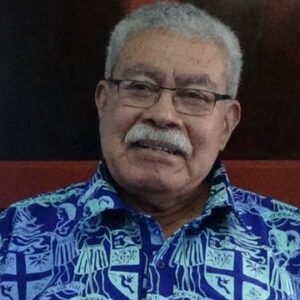 Former Fijian Prime Minister Laisenia Qarase. He was born a Fijian at a time when another ethnic group controlled the government and leadership of his nation. The young man used his rigorous religious upbringing to his advantage and concentrated on his studies, graduating with honors from a top university abroad. Qarase quickly started a successful career in finance after returning to his native country. He was appointed to the Senate after a succession of advancements to the top positions of both private and public financial companies. After a brief tenure in the senate and a destabilizing coup attempt, Qarase briefly took over as president. This leader organized his political forces a year later, and his party easily won the democratic elections, propelling him to the position of Prime Minister. While in office, this politician prioritized better leadership and representation for his own ethnic group while also cultivating friendly ties with other nations that would support his liberalized economic policies. The military overthrew Qarase’s government following successful parliamentary reelection. His adversaries continued to pursue him after that, and he was finally found guilty of corruption on what many unbiased observers define as political persecution grounds. Qarase and his family are still campaigning for liberal and democratic reforms in their country.

On Vanua Balava Island in the Fijian archipelago of Lau, Laisenia Qarase was born on February 4, 1941. Josateki Mate, a member of the neighborhood Tota clan, was his father. In Suva, Fiji, he attended “Suva Grammar School.”
Qarase enrolled in New Zealand’s “University of Auckland” in 1959. He pursued a Commerce course of study.

Qarase returned to Fiji to work as a banker in the private sector after graduating.
He was appointed managing director of the “Fiji Development Bank” in 1983. He would serve in this capacity for the ensuing 15 years.

He served as the director of “Fijian Holdings,” a government investment company, from 1992 until 1995. He developed a nine-point plan to provide government aid to Fijians while serving as director.
He received the role of chairman of “Fiji Television” in 1994, which he would retain for four years.

The investment banker was brought on board to run the privately held “Fiji Merchant Bank” in 1998.
When he was elected to the Senate in 1999 by the nation’s Great Council of Chiefs, his political career really took off.
He was named interim prime minister in 2000 after a failed coup attempt caused the government to become unstable.

The Supreme Court declared on July 18, 2003, that Laisenia’s decision to exclude a competing political group from his cabinet was illegal. A little over a year later, the Supreme Court ordered that 14 of the 30 cabinet positions be given to the opposing party by the Prime Minister.

On April 13, 2005, Qarase vehemently defended his government’s decision to imprison two visitors from Australia for engaging in gay behavior. The crackdown drew tremendous censure on a global scale.
On May 13, 2005, he spoke at a distinguished conference and declared that the biggest problem facing development banks was poverty. Then, the prime minister harshly denounced the disparity in income.

He stated at a gathering of the Commonwealth Parliamentary Association on August 29, 2005, that western-style democracy was a “foreign notion” to his people and that some of its features conflicted with Fijian customs. He continued by praising the benefits of aristocratic birth.

Qarase’s SDL party narrowly prevailed in the elections on May 6, 2006, keeping him in his post as prime minister. He was overthrown on December 4 of the same year by a military takeover directed by Voreqe “Frank” Bainimarama. Since then, there have been no democratic elections in the nation.

Numerous accusations of corruption were leveled at the former prime minister in 2005. He was tried five years after that.
He sued the government for the coup in 2007. As a result, the nation’s martial law was lifted.

Qarase was convicted guilty of abuse of office on August 3, 2012, and was given a one-year prison term. After being free for eight months. He continues to carry out the responsibilities of an elected official in the opposition.

From March 16, 2001, to December 4, 2006, Laisenia Qarase served as the prime minister of Fiji. The political figure is renowned for his measures intended at enhancing the economic conditions in the country, even if his second stint in power was abbreviated due to the subsequent political unrest.

The leader of the Papua New Guinean government presented Qarase with the “Star of Melanesia” on October 30, 2005, in recognition of his work advancing the trade and interests of the Melanesian people throughout the broader Pacific.

Leba Laveti and Laisenia are wed. They have five kids together. While two of their other boys traveled to Australia, one of their sons relocated to the United States.
Qarase has spent his entire life as a devoted Christian. Benny Hinn, an American evangelist, is a close friend of his.

According to reports, Hinn’s 2005 trip to Fiji garnered 370,000 spectators. Qarase has cited his staunch anti-homosexual prejudice as justification for his fundamentalist religious beliefs.

Laisenia is one of the wealthiest and most well-liked politicians. Laisenia Qarase is worth $5 million, according to our analysis of data from sources like Wikipedia, Forbes, and Business Insider.

This political leader was toppled in a coup and has since resided in Fiji despite harassment from his political rivals.