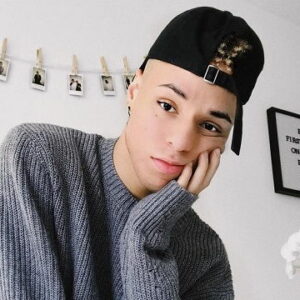 Larri Merritt is an American social media influencer and a YouTube personality who runs a channel named ‘LARRAY.’ He first rose to prominence thanks to his Vine account, where he released hilarious videos that helped him build a large fan base. He got increasingly engaged on other social media platforms once the short video sharing app went out of business. He created his own YouTube channel and began uploading a range of videos, including comedic videos, music videos, and personal vlogs. He also does a lot of challenges and prank videos. He is incredibly popular on Twitter and Instagram, where he primarily shares images of himself and his friends, in addition to YouTube. He has a TikTok account as well.

Larri Merritt began producing amusing short videos on Vine while he was a teenager. He started using Vine to pass the time when he was bored. However, he quickly gained a loyal following after receiving great feedback from viewers. It didn’t take him long to become a well-known Viner. Before Vine shut down, Merritt had garnered approximately 200 thousand followers on his account. He then turned his attention to other social media networks. He already had a YouTube channel named ‘LARRAY,’ and he started uploading more frequently there. Larri Merritt’s YouTube channel has over 1.8 million subscribers as of November 2018, and he publishes videos on a regular basis.

Merritt uses YouTube to share a variety of films, including reaction videos, amusing vlogs, pranks, and parodies. Millions of people have watched some of his most popular videos. ‘The Race (Remix) – First Place / Larray (Official Music Video)’, which he posted on February 11, 2018, is without a doubt one of his most entertaining videos. The video has been seen over 20 million times. Merritt can be seen in the video dancing and singing in a comedic manner. ‘Fighting 10 Year Olds on Roblox,’ ‘I Found a Boyfriend on Roblox,’ and ‘Send This to a Person You Hate with No Context,’ all of which have over a million views apiece,’ are among his other popular videos. He has almost 2.4 million admirers and about 80 million hearts on the app TikTok, where he is quite active.

Larri Merritt was born on July 22, 1998, in Oakland, California. He and his family currently reside in Los Angeles.

Merritt is quite active on social media, with millions of followers on a variety of platforms. Despite being a well-known social media personality, he likes to keep his personal life private.

Larray’s current net worth is around $1million.