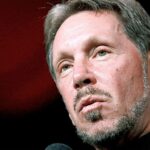 Lawrence Joseph ‘Larry’ Ellison is an American businessman best known as the co-founder and CEO of Oracle Corporation, a multi-billion dollar software corporation. He was a university dropout with a strong interest in the rapidly expanding computer design system, and he relocated from Chicago to California in search of success. He began by creating databases for the CIA and swiftly progressed to the concept of founding his own company after creating the ‘Oracle’ database. With a $2000 investment, he co-founded ‘Software Development Laboratories,’ which ultimately became known as ‘Oracle Corporation.’ Since its founding, the firm has steadily grown in the software sector, and Ellison is the third richest man in America, with a fortune of almost $ 52 billion. It’s remarkable to see how someone who had such a rough upbringing and adolescence, who was abandoned by his birth mother, never met his biological father, and was raised by an adoptive father who was aloof and judgmental of him, rose to such tremendous heights in life. Ellison is a man who, despite all difficulties, attained brilliance via his daring, talent, strong ideas, and hard effort.

Larry Ellison was born in New York City to a Jewish teen mother who was unmarried at the time. His mother gave him to her aunt and uncle for adoption when he was 9 months old because he had pneumonia.
He grew up on the south side of New York City and didn’t realize he was adopted until he was 12 years old. He went to Eugene Field Elementary School and then Sullivan High School in Chicago.
Louis Ellison, his adopted father, owned a little real estate business in Chicago but lost it all during the Great Depression. Young Ellison didn’t get along with him because he was distant and unyielding.
Despite being raised in a religious environment and attending synagogue on a regular basis, Ellison grew up to be a religious skeptic who did not believe in traditional religious dogmas. When he was 13, he refused to have a bar mitzvah ceremony.
When Ellison’s adoptive mother died, he enrolled at the University of Illinois but dropped out. Later, he attended the University of Chicago, but dropped out as well.

After dropping out of college, Ellison began working for the Ampex Corporation in the 1970s. He worked on databases, specifically for the CIA, which he dubbed ‘Oracle.’
Ellison established his own company, Software Development Laboratories (SDL), in 1977. He began it with two other partners and an initial investment of roughly $2,000 US dollars.
Ellison renamed his company ‘Relational Software Inc.’ in the late 1970s and early 1980s, and it later became ‘Oracle Systems Corporation,’ called after its patent creation, the ‘Oracle’ database.
He intended Oracle to be compatible with the recently developed IBM System Inc., which was founded on Codd’s theories and was similar to Oracle, but IBM refused to share System R’s code.
Oracle began losing money in the business in 1990, and roughly 10% of its employees were laid go. This scenario arose as a result of Oracle’s marketing strategies.
Informix overhauled Sybase in 1994 and became Oracle’s most significant software competitor. For years, the competition between the two businesses’ CEOs, Phil White (Informix) and Larry Ellison (Elison), was emphasized in the media.
Informix eventually declared bankruptcy, and Phil White was sentenced to prison; his firm was acquired by IBM in 2001. Ellison, who had been the director of Apple Computer for roughly 5 years, quit about the same time.
Oracle enjoyed a period of dominance and success when Informix and Sybase were trounced in the battle, until Microsoft SQL Server and IBM grabbed the market.
According to reports, Ellison was earning $975,000 in 2005, with a bonus of $6,500,00 and compensations of $955,100, which grew to $56.8 million in the late 2000s. He was named the wealthiest person in California. The European Union approved Oracle’s acquisition of Sun Microsystems in 2010. Oracle now has ownership of the widely used MySQL open source database. In the same year, Ellison appointed Mark Hurd (ex-CEO of HP) as a Co-President.
Ellison’s net worth was reported to be $28 billion in the late 2000s. According to ‘The Wall Street Journal,’ he is the highest-paid executive.

The invention of the ‘Oracle’ database, which led to the formation of his company, ‘Oracle Systems Corporation,’ is regarded Ellison’s most important work of his career. As a result, he is now America’s third richest businessman.

The second race of the 33rd America’s Cup was won by Ellison’s yacht USA 17. For the first time in more than a decade, he and his BMW Oracle team brought the championship back to America in 2010.

This well-known IT entrepreneur and co-founder of a well-known IT firm makes a cameo appearance in the 2010 film “Iron Man 2.”
Larry Ellison is a philanthropist who continues to support humanitarian projects with his donations. He is one of the 40 billionaires who have pledged to give back to the community through “The Giving Pledge.” The Giving Pledge is a non-profit organization formed by Bill Gates and Warren Buffet that encourages the world’s rich to donate their money to charitable causes.

As of August 2014, Larry Ellison, the chairman of the world-famous IT behemoth ‘Oracle,’ had a net worth of $49.7 billion. Before founding a corporation with two colleagues in the 1970s, Ellison worked for companies such as ‘Ampex Corporation’ and ‘Amdahl Corporation.’ In 2005, Ellison was reportedly given a salary of $975,000. He was also handed a $7 million stock option.