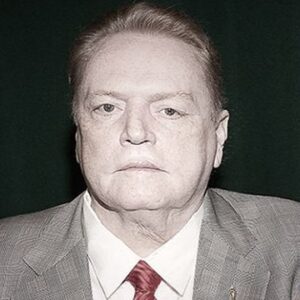 Larry Flynt, an American publisher and proprietor of the adult entertainment business “Larry Flynt Publications,” is one of the most well-known figures in the sector with an estimated net worth of $400 million. After being shot by a gunman during an attempted assassination, he was left paralyzed and forced to live his life in a wheelchair. He has been involved in several debates and court cases over the period of many years, including one involving the First Amendment. He is the editor-in-chief of the magazine “Hustler,” which made headlines for publishing graphic images of a previous first lady. His father was an army officer, and his mother was a housewife when he was born in Magoffin County, Kentucky. His parents divorced when he was just 10 years old, and he was raised in poverty and misery. He briefly enlisted in the US Army and Navy before moving on to a number of occupations and opening his own bar. Finally, he launched the first Hustler Club bar. Scroll down and read on to discover more fascinating information about his upbringing, personal life, and accomplishments.

Lakeville, in Kentucky’s Magoffin County, is the birthplace of Larry Claxton Flynt Jr. His mother Edith was a stay-at-home mom, while his father Larry Claxton Flynt, Sr. was a sharecropper and a World War II veteran.
He was raised by his mother and maternal grandmother till the age of three because his father was away serving in the military. Jimmy Ray Flynt was his younger brother, while Judy was his younger sister.

He lost his sister Judy to leukemia in 1951. His parents started having issues soon after, and the next year they split. He and his mother moved to Hamlet, Indiana.

Hamlet’s life with his mother was not what he had anticipated. He did not get along with and detested his mother’s partner, so he returned to Magoffin County with his father.

He attended Magoffin County High School, but at the age of 15, he ran away and enlisted in the US Army with a fraudulent diploma. During this time in his life, he developed a passion for poker.

After being subsequently released from the service, he moved to Dayton, Ohio, where his mother resided and had a variety of jobs, one of which was at the General Motors Assembly Plant.

He enlisted in the Navy in 1960, serving as a radar operator aboard the aircraft carrier USS Enterprise. He continued to serve in the navy for the following four years before being released.

He utilized the $1800 in savings he had saved to purchase his mother’s Dayton, Ohio, tavern, Keewee. The business was successful, and he started making $1,000 a week.

After profiting from “Keewee,” he bought two other bars. He worked about 20 hours a day, day and night, at the bars, and frequently took sleeping drugs.

He founded his first Hustler Club bar in 1968 with a group of skimpily dressed and nude dancers. Later, he established offices in Toledo, Cincinnati, Cleveland, Columbus, and Akron.

Ultimately, he bought a tiny newspaper called “Bachelor’s Beat,” which he later sold after two years. He published the “Hustler Newspaper,” a four-page, black-and-white newsletter featuring news and updates on his clubs, in March 1972.

His consumers had grown to love the “Hustler Newsletter,” so in May 1972, he raised its page count to 16, and in August, he added another 32 pages.

The US economy fell into recession following the 1973 oil crisis. This significantly slowed down his business and caused him to incur significant debt. At this point, he transformed the “Hustler Newsletter” into a pornographic publication.

He released the inaugural issue of the pornographic magazine “Hustler” in July 1974. The magazine initially struggled, but after a year it started selling successfully, allowing him to pay off his obligations.

The first image of “pink shots” was published by “Hustler” in November 1974. With every publishing, he had numerous issues because many distribution companies deemed the content he released to be sexual.
While she was on vacation while sunbathing, he published naked photos of First Lady Jacqueline Kennedy Onassis in August 1975. For $18,000, he had paid the paparazzi for the images.

He established Larry Flynt Publications, a company that produces adult entertainment, in 1976. With this, he grew his company and started numerous more adult periodicals.

He opened Larry Flynt’s Hustler Casino in Gardena, California, on June 22, 2000. According to the California Gambling Control Commission, he is the only owner of the land.

He has had five marriages. He got a divorce from each of his first three wives, Mary Flynt, Peggy Flynt, and Kathy Flynt. Althea Leasure, his fourth wife, passed away in 1976 at the age of 33.

He was charged with obscenity in 1976 by Simon Leis, the director of a neighborhood anti-pornography group. He received a sentence of seven to twenty-five years but only spent six days when his conviction was reversed.

Joseph Paul Franklin, a shooter, shot him and his attorney Gene Reeves outside a Georgia courtroom in 1978. This left his legs permanently paralyzed, forcing him to use a wheelchair and resulting in speech impairments.
He wed Elizabeth Berrios in 1998. In the Hollywood Hills, the couple resides in their house.

He became involved in a number of legal disputes and cases, such as the Hustler Magazine v. Falwell case, the Miller v. California libel suit, the Miller v. California obscenity case, and the Keeton v. Hustler Magazine libel suit.
A film titled “Larry Flynt: The Right to Be Left Alone” was released in 2008 and it was about him. It was under Joan Brooker-Marks’ direction.

He and David Eisenbach co-wrote the book “One Nation Under Sex.” In 2011, the book was released.

At the time of his passing, American publisher and entrepreneur Larry Flynt had a net worth of $500 million. His position as president of Larry Flynt Publications, which publishes publications including “Hustler,” made him most famous. At the age of 78, Larry passed away on February 10, 2021.

This notorious adult entertainment producer received a six-month prison sentence for desecrating the American flag when he was seen wearing a diaper fashioned from the flag.