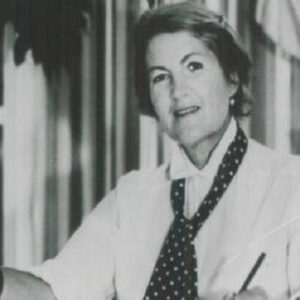 Laura Ashley was a fashion designer and entrepreneur from Wales. She came from a low-income family in rural Wales, where she grew up in a service class and religious household. Ashley’s grandmother instilled in her a love of design, and while working as a secretary for the National Federation of Women’s Institutes in London, she began making tablemats, headscarves, tea cozies, and other items as a side profession. However, her flowery printed Victorian patterns on headscarves were quite popular, and brands such as John Lewis began to purchase them from her. By that time, she had grown her tiny ‘work from home’ firm into a small factory-based enterprise, which she could only do due to her husband, Bernard Ashley’s operational assistance. ‘Laura Ashley’ stores and factories soon sprang up all across England and Europe, and the entire Ashley family was involved in the venture. Her phenomenal success in designing clothes that were meant to suit the style and comfortability of housewives, inspired by the rural aesthetics of Wales, is commendable, given that her designs were directly competing with the in-vogue male-dominated style of clothing for women in the 1960s when she was gaining popularity.

Laura Ashley was born in Dowlais, Merthyr Tydfil, Wales, and raised as a conservative Baptist in a civil service household. Marshall’s School in Wales was her first school, but she was soon transferred to Elmwood School in Croydon.

She was sent back to Wales at the age of 13 and enrolled in the Aberdare Secretarial School. But, in 1942, she dropped out of school and joined the Women’s Royal Naval Service.

The career of Laura Ashley

Ashley arrived in London in 1945 to work as a secretary at the National Federation of Women’s Institutes after serving in the Women’s Royal Naval Service. She and her spouse had made their home in London by this time.
While working as a secretary and caring for her family, Ashley began working on Institute development projects such as quilting and designing headscarves, napkins, and tablemats, among other things, a skill she learned from her grandmother.

Ashley and her husband, Bernard, spent ten dollars on a screen frame, dyes, and a few yards of linen before beginning to create printed fabrics. In 1953, she began printing Victorian-style headscarves.
Her printed Victorian scarves quickly became well-known, and major retailers such as ‘John Lewis’ began to request them. Ashley’s husband quit his day job to help with the family business’s expanding needs.

They relocated the new company to Kent in 1955, and then to Ashley’s hometown of Wales in 1956. In Machynlleth, Powys, they launched their first shop. For six years, the Ashley family resided on the roof of the shop.

Soon after, further factories were built in the heart of Mid Wales, and by the mid-1970s, rustic Welsh designs were being sold all throughout Europe. Their business grew to include cities such as Paris, Geneva, and others.

Ashley’s business had expanded into home furnishings by the 1980s, and the company now had about 5,000 retail shops across the world. She had realized her aim of starting a shop in Cardiff, Wales, by this time.

Ashley’s most well-known job is co-founding the fashion label ‘Laura Ashley’ with her husband. She began by creating scarves and eventually built a cottage industry worth £200 million at the time of her death.

Ashley met Bernard Ashley, an engineer, at a Wellington youth club while working in London, and they married in 1949. Bernard aided her in attaining her ambition of starting her own business.

Ashley was visiting her children in 1985 for her 60th birthday celebrations when she fell from her daughter’s home in the Cotswolds. She was rushed to the hospital but died after only 9 days in a coma.
Carno, Powys, Wales, is where she was laid to rest.
In 2009, her husband died of cancer.

Laura is one of the wealthiest fashion designers and one of the most well-known. Laura Ashley’s net worth is estimated to be $1.5 million, according to Wikipedia, Forbes, and Business Insider.

This well-known Welsh designer declined an offer of an Order of the British Empire in 1975 because she was concerned that her husband had not received one. Her spouse, on the other hand, was knighted after she died.
The Ashley family owned a yacht, a private plane, the French Chateau de Remaisnil in Picardy, a Brussels townhouse, and the villa Contenta in Lyford Cay, Bahamas.

Her spouse established the Laura Ashley Foundation in 1987 to assist young developing talent in attaining their aspirations. It’s still going strong.
While Bernard and Ashley were courting, he was posted to India with the Gurkhas. They used to write letters to one other.

Initially, many of their garments were created by women working from home to supplement their income.
Ashley used to live in Pimlico, London, with her husband when she came up with the idea for printed materials.
Their initial factory was in Kent, London, in an old coaching house.