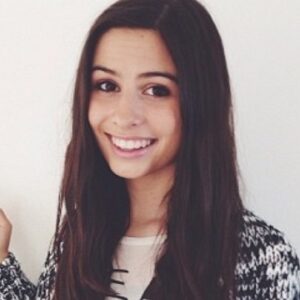 Lauren Christine Cimorelli is a pop vocalist and the second youngest of the six sisters who make up the famed Cimorelli band. The girls’ song has caused quite a stir in the American pop culture arena. As of May 2017, the band have released five extended plays, one mixtape, and two full-length albums, slowly but steadily establishing themselves in the R&B and pop circles. Interestingly, the Cimorelli girls began their career by recording and uploading renditions of popular songs to YouTube, but now they compose and write their own music. Their music is largely a cappella with a few instruments thrown in for good measure. Lauren occasionally plays the piano and tambourine for the band in addition to delivering vocals. Lauren and her sister Christine penned the lyrics for their band’s debut EP. ‘I’m a Mess’ and ‘Acid Rain’ are two of her tunes. The incredibly talented girl currently has everything going for her. She is intelligent, humorous, and attractive, in addition to being highly skillful. Lauren, on the other hand, hasn’t let any of the attention she’s received get to her head. She is grounded and straightforward, which distinguishes her.

The Cimorelli sisters have carved out a space for themselves in pop music and the R&B genre. Lauren Cimorelli, the second youngest of the sisters, was a founding member of the band, which rose to prominence as a singing group in 2007. Dani, the Cimorelli sisters’ youngest sister, joined the band in 2010. The girls began their career by recording renditions of popular songs and uploading them to YouTube. The Cimorelli girls debuted with their first EP in 2008. Lisa arranged the vocal harmonies while Christina and Lauren wrote the lyrics. After signing a record deal with Universal Music’s Island Label, the band rose to prominence.
They released the CimFam EP in 2011, which included one original song as well as five covers. The EPs ‘Believe It,’ ‘Made in America,’ and ‘Renegade’ were released over the next few years to rave reviews. In order to solidify their status in the music industry, the Cimorelli sisters released their debut mixtape in 2015. It was titled ‘Hearts on Fire,’ and it had nine acoustic tracks. Finally, the trio published their first album, ‘Up At Night,’ in May 2016, which debuted at No. 24 on the Top Country Albums chart and sold 1,500 copies in its first week in the United States. Due to its success, they released their second album, ‘Alive,’ later that year. Lauren has periodically served as a pianist and tambourine player for the ensemble over the years, in addition to delivering vocals. Lauren’s personal favorites songs are ‘I’m A Mess,’ ‘Renegade,’ and ‘You’re Worth It,’ however she admires the Cimorelli sisters’ entire body of work. She also enjoys Lady Gaga’s ‘You and I’ rendition as well as ‘Lips are Moving.’

Lauren Cimorelli was born on August 12, 1998, in a busy Sacramento, California home to Mike Sr and Lynne Cimorelli. She is one of 10 siblings. With two older brothers and four older sisters, she is the family’s seventh child. She has three younger brothers and a younger sister. Lauren was a shy and quiet child. With time, though, her demeanor evolved as she gained confidence and a sense of self-worth, and she became outgoing and intelligent.

Swimming and flag football are two of her favorite activities. Lauren has brown eyes and dark brown wavy hair, and she is stunning. She is witty and snarky, which comes over in her tweets and remarks. Lauren is the most dependable of the bunch, as well as the most chilled-out, according to her sisters’ words. Lauren’s days aren’t all the same for her, as she may be very focused and serious on some days and quite laid back on others. She can be witty and joyful on some days and irritable on others.

Lauren Cimorelli has had a celebrity crush on Benedict Cumberlach since she was a child. She enjoys drawing, painting, skateboarding, going to the beach, and body surfing in addition to singing. She like spaghetti and ice cream but despises cereals. Lauren enjoys traveling and wishes to spend her holiday in the Bahamas. She is a huge fan of superhero movies, with ‘Iron Man’ being her favorite.

When asked what superpower she would choose if she had the chance, the bright young lady stated she would choose shape shifting. Cimorelli is a strongly devout man in addition to being musically gifted and headstrong. She attends church on a weekly basis and claims that she is happiest when she concentrates on God.

Her net worth is estimated at about $5 Million.