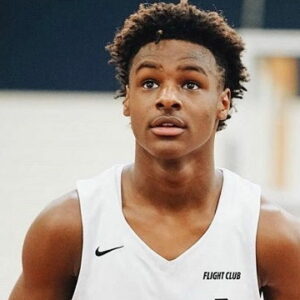 Bronny James, the eldest son of NBA great and Cleveland Cavaliers superstar LeBron James, is also known as LeBron James Jr. He led his AAU level basketball team to the fourth grade national title in Kentucky in July 2014 as a basketball player. Despite his youth, he has won the Most Valuable Player award multiple times, garnered a lot of press attention, and pleased a lot of coaches and colleges. For his playing style, he has already been likened to his father, and his father believes he has more promise than he did when he was his son’s age. He’s noted for his scoring and dribbling skills, as well as his dunking abilities. He’s spent his entire life around the basketball court, and he frequently attends Cleveland Cavaliers games with his brother Bryce Maximus to support his father. In March 2017, he showed off his skills at veteran NBA coach and player John Lucas’ all-star weekend tournament, which serves as a sort of test for America’s best middle school players.

LeBron James Jr., like his father, was a physically active child who showed an early interest in basketball. Since he was seven years old, the media has been following the exceptional potential, and the boy has never disappointed those who compared him to his father. By the age of nine, he was dominating the prep circuit and attracting big college interest around the country, even catching the attention of Ohio State coach Thad Matta for potential recruitment. He had offers from Duke and Kentucky when he was just 12 years old. Videos of him performing frequently appear on the internet, attracting a large audience on YouTube and other social media platforms. As a result, he has already become a media sensation, and his success has led to his being dubbed “the next big thing in basketball.” LeBron James Jr. helped Old Trail School in Bath Township, Ohio win the Independent School League tournament in February 2018. In March 2018, he was instrumental in the North Coast Blue Chips’ victory at the John Lucas All-Star Weekend in Houston. LeBron James Jr. began his freshman year of high school at Sierra Canyon School in Chatsworth, Los Angeles, in May 2019. On November 21, 2019, he made his high school debut, scoring 10 points off the bench in a rout of Montgomery High School. He scored a season-high 17 points against Viewpoint School on January 15, 2020, to help his team win the game.

As a father, as a son

LeBron James Jr. prefers to play point guard on the basketball floor. He, like his great father, can score goals and is recognized for aiding his teammates. He has a fantastic ability to pinpoint pass and handle the ball with precision, and he can also knock down the triple with ease. Even LeBron James admitted to Cleveland.com that his son is a better ball handler and shooter than he is. His father, a former No. 1 overall choice and highly sought-after college basketball recruit, is not pleased with the speculations surrounding his young son’s recruitment. He’s also irritated by the NCAA’s interest in his son when he’s still a child. He claims that his “son will be a kid for as long as he can be,” and that he doesn’t need to be concerned with recruitment at a time when he should be concerned about his homework.

“Bronny” Lebron Raymone James was born in Cleveland, Ohio on October 6, 2004. He is the eldest son of NBA superstar LeBron James and his high school girlfriend, Brittany Brinson. In high school, both of his parents were athletic; his father played basketball and football, while his mother played softball and was a cheerleader. His parents began dating when they were 17 and 16 years old, and after 12 years together, they married on September 14, 2013 in San Diego. His mother became pregnant with him in the middle of her senior year of high school, and he was born when his father was 19 and his mother was only 18 years old. Bryce Maximus, his younger brother, and Zhuri, his younger sister, are his siblings. While his father is regarded as one of America’s most famous and well-known players, his mother is a socialite with a sizable social media following. His parents also own the Home Court by LeBron James furniture business.

He spent most of his youth at his father’s three-story mansion in Coconut Grove, an affluent Miami area, because his father was a member of the Miami Heat. In November 2015, his family relocated to Brentwood, Los Angeles, when his father purchased a $21 million East Coast–style estate there. While he enjoys playing basketball, he also enjoys playing video games. He and his father and brother frequently engage in epic video game battles, and he also hosts movie evenings at home. Zaire Wade, the son of his father’s longtime colleague and Chicago Bulls guard, is one of his closest pals. Chris Paul, an NBA point guard, is his godfather.

Lebron James Jr net worth is estimated to be around $5 million.