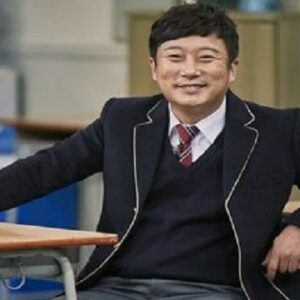 One of the most recognizable figures on South Korean television is the comedian Lee Soo-geun. In 2000, he launched his career with the variety program “Gag Concert.” Lee quickly rose to prominence as the nation’s most well-known comic because of his eccentric one-liners and superb situational humor. His career took off in the middle of the 2000s, and he quickly rose to prominence on Korean variety shows. Throughout his prosperous career, he made a few notable appearances in shows including “Happy Together” and “My Girlfriend is a Nine-Tailed Fox.” He has experienced problems in the past, though, like many comedians. He still battles his inner demons and frequently runs afoul of the law. Many of his well-wishers have expressed concern about his gambling addiction, and he is still working to overcome it. That hasn’t, however, had an impact on his career trajectory; he continues to participate in well-known TV series and has also garnered numerous accolades. For his skills as a host, he has received numerous “KBS Entertainment” honors, a “Baeksang Arts Award,” and a “South Korea Entertainment Award.”

On February 10, 1975, Lee Soo-Geun was born in Gyeonggi-do, South Korea. He had a really difficult childhood, and a lot of his problems in life were caused by his sensitive temperament. He grew up being close to his mum. His mother became unwell when he was in middle school, but the illness was difficult for doctors to diagnose. Tradition has it that she was then made to leave the house permanently and to into a shaman.

Lee’s life was affected by this incident, and he subsequently began to experience despair. Even now, when he thinks back on that time and the difficulties he had to endure, he frequently becomes depressed.

He was able to experiment with coping mechanisms for the unfairness that life had placed on him thanks to his tragic life, and he quickly began making those around him laugh. He was regarded as the class clown throughout middle and high school because he was always thinking of jokes to make everyone laugh. However, pursuing a career in the industry was never a possibility for him because both his father and Lee want a stable existence for him.

After finishing his studies, Lee began working odd jobs. By that time, he had begun singing only for amusement, but because others liked his voice, he felt compelled to try his luck in the music industry. He attempted to participate in the “MBC River Music Festival,” but he had mixed results.

Lee spent a considerable amount of time working as a leisure instructor and an aerobics instructor because she had no plans to pursue a career in entertainment. He kept changing jobs and never really got comfortable with any one position before landing his first TV gig.

Lee began his career in 2000 with the acclaimed South Korean comedy sketch show “Gag Concert” on the “KBS2” network. Gag Concert is now the longest-running Korean variety show of its kind. Lee spent several years on the show thanks to his comic timing, and in 2013 he announced his departure. He had become incredibly well-known because of the show, and after he left, he was inundated with requests to appear in more such programs.

He was contacted by the creators of one of the most well-liked discussion shows in South Korea, “Happy Together.” Lee joined it in 2006, participated in it for a year, and then switched to “Are you Ready?” in 2007. Although Lee liked his time there, his performances did not earn him the success that his talent merited.

His second job was a completely different story. In 2007 Lee worked on “1 Night 2 Days” and joined the cast of “Happy Sunday.” Lee was recognized as the cast member who worked the hardest by the producers, show runners, and viewers. The reality-variety show went on to become one of the most popular of its time, and Lee was finally beginning to receive the attention he truly deserved as a comedian after garnering enormous acclaim for his time on it. He also allowed the show to display his marriage.

Due to his success, he was able to land more lucrative MC engagements, especially at the “KBS2” program “Sang Sang Plus Season 2.” He obtained a stay with “MBC” for the program “God of Cookery Expedition” in 2008 after leaving the “KBS2” program.

By participating in programs like “Hakuna Matata,” “Avatar,” “Delicious,” “Happy Birthday,” “Sweet Potato,” “On Your Command Sir!,” and “My Girlfriend is a Nine-Tailed Fox,” he essentially ruled the South Korean variety TV sector in 2010. He soon gained widespread recognition around the nation and rose to the position of most well-known MC on South Korean variety TV. He became picky about the gigs he took.

He made appearances in the films “Win Win” and “Invincible Youth 2” in 2011, and then in “Cool Kiz on the Block” and “New Journey to the West” the following two years. As a result of his continued success, he changed from Castle J. Entertainment to SM C&C, a division of SM Entertainment, as his representative agency.

He then made appearances in the following films: “Knowing Bros,” “Hit the Stage,” “My Daughter’s Men,” “Secretly Greatly,” and a few “New Journey to the West” sequels. He was scheduled to appear in three additional variety programs before October 2017: “Master Key,” “My External Affinity,” and “My Daughter’s Men 2.”

One of his favorite pastimes has always been singing, and with the songs “Let’s Keep Going Until the End,” he has also tried his hand at it professionally. Happiness Song also “HUK.”

In 2013, Lee Soo-geun was allegedly implicated in illicit online gambling. He was charged with making illegal phone, text, and website bets on the top UK football teams. He agreed to all of the accusations made against him. He was consequently housebound starting in 2013 for a period of two years. Lee allegedly begged for forgiveness and pleaded in court. He declared that he would never return to such life after his punishment was through.

Lee and Park Ji-yeon have been wed since 2008. On one of Lee’s most well-liked variety shows, they were married.

One of the wealthiest and most well-known comedians is Lee Soo-geun. Our research revealed that Forbes, Business Insider, and Wikipedia all estimated Lee Soo-net geun’s worth at $5 million.