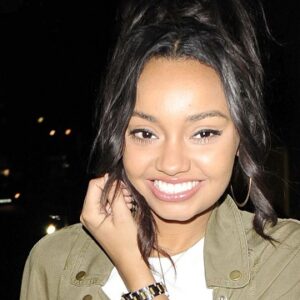 Leigh-Anne Pinnock is a British singer-songwriter who is a member of the all-girl band ‘Little Mix.’ She swept the crowd and judges off their feet in the reality show ‘The X Factor,’ despite coming from a middle-class household. The girl group was created prior to the live events, with each member assessing the vocal abilities of the others. With her band of females, Leigh-Ann went on to win the program, emerging as top vocalists among a plethora of fantastic singers. She commanded the stage every time she walked onto it, and the judges dubbed her “a star in the making.” Leigh-Anne didn’t waste any time proving them wrong; soon after her breakthrough on the show, she and her band created hit albums and chart-topping singles. Her band has been compared to classic girl groups like ‘Spice Girls’ and ‘The Pussycat Dolls.’ From her first soloist audition on the show to her recently certified gold album, she has gone a long way. She is now the face of a number of cosmetics companies, and she has set an example for young people from all walks of life to take control of their own destiny. Leigh-Anne has worked hard to achieve her goal of building a career in the music industry, and she has received several important music awards as a result of her efforts.

Leigh-Anne Pinnock was born on October 4, 1991, in High Wycombe, Buckinghamshire, to Deborah Thornhill and John L. Pinnock. Her mother is a teacher at Harlington Community School, and her father works as a mechanic. Her older sister, Sian-Louise, was born in 1984, and her younger sister, Sarah, was born in 1989. She spent most of her childhood in Jamaica with her sisters or visiting her grandfather.

She discovered enjoyment in music when she was nine years old and began singing. She was a frequent winner at singing competitions while at school, and when she was eleven, she enrolled at the ‘Sylvia Young Theatre School’ in London for a couple of years.
She used to practice singing on her karaoke machine as a teen, and she and her sister would regularly perform as the ‘Spice Girls’ at family gatherings.
Her parents divorced in 2009 after separating in 2006. She continued to study hard as a student and helped her family financially by working odd jobs over the summer, despite the fact that it was tough to come to terms with her parents’ divorce.

She showed remarkable promise in her first audition for the singing reality program by performing Rihanna’s smash hit “Only Girl.” She advanced to the “bootcamp” phase, but was unable to perform solo. As a result, she formed the Orion group with two other singers.
The group did not succeed, but Leigh-Anne was given another chance on the program with Jade Thirwall, Jesy Nelson, and Perrie Edwards, and they created the female band ‘Little Mix.’
Tulisa Contostavlos was her mentor, and she worked with her group. Her vibrato and range were highlighted in her back-to-back appearances on the show.
Her excellent harmonies with the rest of the band wowed the judges the most. Each member of the team capitalized on the strengths of the others, resulting in a powerful and unforgettable performance for both the audience and the judges.
Her performance on the show of the song ‘Beautiful’ was emotionally gripping and demonstrated her vocal flexibility. She seamlessly transitioned from one genre to the next, earning her the title of R&B and pop music’s future.
Her group was the first ever to win the British version of ‘The X Factor.’ They performed a cover of Damien Rice’s song “Cannonball” at the show’s conclusion, which promptly went to number one on the music charts.

Early Years in the Music Business

She debuted the first track off her band’s debut album, ‘DNA,’ at ‘T4 on the Beach.’ The single quickly rose to the top of the UK Singles Music Chart. She accompanied her band on a tour throughout the United Kingdom and Australia to promote her first record, which was met with widespread acclaim.
When DNA was released in 2012, it debuted at number three on the Irish and UK Album Charts inside a week. The album’s second single, ‘DNA,’ was released on radio soon after, followed by the third single, ‘Change Your Life,’ which peaked at number 12 in the UK singles chart that year.
Missy Elliot, a Grammy Award winner, released a single in 2013. The single, named ‘How Ya Doing?,’ reached the top of all music charts worldwide, and the band followed it up by announcing on the radio that the band’s second album will be out soon.

Leigh was pleased about releasing the band’s new album, ‘Salute,’ because it contained numerous R&B tunes that would eventually become foot-tapping nightclub hit songs.
She recorded a song called “Little Me” with her band, which was a homage to the group’s followers and supporters and expressed their achievement.
She was on a globe tour for her second album from 2014 to 2015, and she also performed at events like ‘Sport Relief’ and the ‘Brit Awards.’
Her third album, ‘Get Weird,’ was released in 2015, and it quickly gained Leigh a lot of attention, as well as numerous music accolades for her and her band members. That year, the album’s lead song, ‘Black Magic,’ was certified gold. Her most recent album, ‘Glory Days,’ was published in 2016, and it was the pinnacle of her musical career. The songs had excellent harmony and vocal skill. The album debuted at number one in the UK charts.

Her track ‘How YaDoin?’ featuring Missy Elliot charted in the UK top 20 Hit Songs for the fifth time, making it her fifth top 20 hit. It made millions of dollars and sold over 120 thousand copies.
Her blockbuster album ‘Get Weird’ was deservedly named the finest girl-band album, since its ratings much outstripped those of ‘Spice Girls.’ It was certified double platinum after selling over 600,000 copies and debuting at number fifteen on the Billboard 200 in the United States.
The album’s debut hit, “Black Magic,” spent three weeks at the top of the UK singles chart. It was also her first single to chart on the Billboard Hot 100 in the United States.

More than 300,000 tickets were sold out for the ‘Get Weird’ tour, which was the girl band’s most successful tour, making millions of dollars.

‘Embrace Your Uniqueness’ by Leigh-Anne Pnnock also won the BBC Radio Teen’s Award. In the same year, she won another prize at the ‘Cosmopolitan Ultimate Women’s Awards’ in the category of ‘The Ultimate Girl Group.’ She won an award for ‘Artist of the Year’ after a successful fourth album, but this time at the ‘Glamour Awards’ in 2016.

Before becoming famous, Leigh-Anne Pnnock worked as a waiter at Pizza Hut. She started a Tumblr fashion blog named ‘Leigh Loves’ in 2015. This isn’t her first foray into the fashion world. In 2012, she endorsed the Schwarzkopf hair color line ‘Live Colour XXL’ and marketed a children’s clothing line under the name ‘Primark.’

Leigh-Anne Pnnock and her band have worked together to help charities and foundations such as ‘Children In Need’ and ‘Together for Short Lives,’ performing at their fundraising events.

Before they broke up in 2015, Leigh-Anne Pnnock was in a two-year relationship with footballer Jordan Kiffin. In 2016, she began dating footballer Andre Gray, and the two became engaged in 2021. She announced in May 2021 that she and her husband are expecting their first child together.

Leigh–Anne Leigh–Anne Pinnock’s net worth is estimated to be between $3 million.

She has Justin Bieber’s name tattooed on her neck and is a passionate fan.