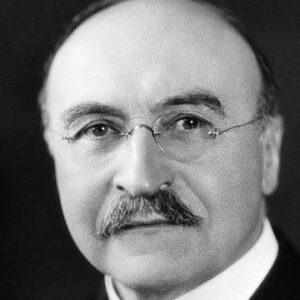 Leo Henricus Arthur Baekeland was a Belgian-American chemist renowned for his inventions of Velox photographic paper and Bakelite polymeric material. His invention of the inexpensive, inflammable, and flexible plastic Bakelite cleared the path for the modernization of the plastics sector, earning him the title “Father of the Plastics Industry.” After earning a scholarship from the port city of Ghent in northwest Belgium, he attended the ‘University of Ghent’. As an associate professor of chemistry at the ‘University of Ghent’ following his Ph.D. While on a fellowship in New York, he was convinced to settle there. He joined a photographic company, where he worked for several years, and found the photographic paper Velox, which is coated with gelatine silver chloride and can be manufactured using artificial light. After a few years, he sold Eastman Kodak Company the rights to the photographic paper, which had become a commercial success. His innovative discovery of Bakelite, which was created by combining phenol and formaldehyde, was one of his many other chemical technology endeavors. It signified the beginning of the plastics era. He founded the ‘General Bakelite Company’ after obtaining a patent for his idea. During his later years, he sold his company to “Union Carbide.”

He was born on November 14, 1863, in Sint-Martens-Latem, Belgium, to Charles Baekeland and Rosalie (Merchie) Baekeland. His father was a shoemaker, while his mother was a housekeeper.

At the age of five, he enrolled in primary school and then attended “Atheneum,” the government’s high school. He studied economics, mechanics, physics, and chemistry during evening lectures at the “Ghent Municipal Technical School.” He received medals in every subject.

In 1880, he attended the University of Ghent after earning a scholarship from the port city of Ghent in northwest Belgium. He earned his Bachelor of Science degree in 1882. At the age of 21, he received his doctoral degree.

The “Government Higher Normal School of Science” in Bruges appointed him in 1887. Until approximately 1889, he taught chemistry and physics at the institution. In the meantime, he found a technique for developing photographic plates using water instead of chemicals and patented the technology in Belgium in 1887.

In 1889, he accepted the position of associate professor of chemistry at the University of Ghent. In the same year, he was awarded a travel scholarship, and he and his wife visited numerous institutions in the United States and England.

In 1891, he established himself as a research and consulting chemist. After approximately two years of arduous effort, he found the photographic paper Velox, which is coated with gelatine and silver chloride and can be made by artificial light.

As the recession made it difficult to find buyers and investors for the product, he teamed up with Leonard Jacobi and founded the “Nepera Chemical Company” in Yonkers, New York. After a few years, in 1899, he transferred the rights to the successful photographic paper to the Eastman Kodak Company.

The agreement featured a “non-compete clause” that prohibited him from conducting photography research for at least the following two decades.
Using a portion of the selling money, he purchased the family home “Snug Rock” in North Yonkers and installed a laboratory there to continue his studies.

Since he was unable to conduct research in photography, he investigated alternative research fields. He discovered that electrochemistry, which had previously been limited to the electro-deposition of certain metals from aqueous solution, had expanded into an important branch of the chemical industry.

In 1900, his interest in electrochemistry led him to Germany. After spending the winter at the “Technological Institute of Charlottenburg” in its electrochemical laboratory, he returned to Yonkers and outfitted his own laboratory with electrochemical equipment.

He assisted Elon Huntington Hooker and Clinton Paul Townsend for a brief time in the development of a production-grade electrolytic cell. In order to create an improved diaphragm cell for the chloralkali process, he utilized iron hydroxide, asbestos fiber, and asbestos-filled woven fabric.

His innovations were instrumental in establishing the “Hooker Chemical Company” in 1903 and constructing one of the largest electrochemical facilities in the world at Niagara Falls.

In 1905, he began searching for a synthetic substitute for shellac, a natural glue produced by the female lac bug. He determined that perfect control of temperature and pressure in combining phenol and formaldehyde can make a polymer that, when combined with additives such as asbestos or wood, transforms into a hard plastic that can be molded. Thus, Bakelite, whose chemical name is polyoxybenzylmethylenglycolanhydride, was discovered.

On December 7, 1909, he was granted a patent for his invention, Bakelite, and in 1910, he founded the “General Bakelite Company.”
In 1917, he was appointed as a professor by Columbia University via a special appointment. In the same year, he became chairman of the Committee on Patents of the National Research Council.

The Smithsonian paperwork from the County of West Chester Court House in White Plains, New York, states that he was granted U.S. citizenship on December 16, 1919.

In 1922, two firms, notably the ‘Redmanol Chemical Products Co.’ and the ‘Condensate Co.’, joined with Leo Baekeland’s ‘General Bakelite Company’ to become the ‘Bakelite Corporation’ as a result of a patent dispute that went in his favor.

He became President of the American Chemical Society in 1924. His other affiliations include the United States Nitrate Supply Commission and the United States Naval Consulting Board. He remained a Trustee of the “Institute of International Education” for many years.

He remained a member of the ‘Advisory Board’ of the ‘Chemistry Division’ of the ‘U.S. Department of Commerce’ for several years beginning in 1925.

Following numerous disagreements with his son in 1939, he sold his business to “Union Carbide” and retired. He spent the remainder of his life working to construct a tropical garden at his Florida winter residence, ‘Coconut Grove,’ which became his obsession.

His innovative creation of Bakelite ushered in the age of plastics. Bakelite applications proved to be vast and diverse. Electrical gadgets, radios, electron tubes, automobile components, billiard balls, and jewelry were among the earliest goods that utilize Bakelite. Later, it expanded to encompass many more segments of the industry.

He married Céline Swarts, daughter of his professor Theodore Swarts, on August 8, 1889. Three children were born to the couple: Nina, Jenny, and George.

On February 23, 1944, he died of a cerebral hemorrhage at a Beacon, New York, sanatorium. He was laid to rest in the ‘Sleepy Hollow Cemetery in Sleepy Hollow, New York, which is a community in Mount Pleasant, Westchester County.

Leo is one of the wealthiest entrepreneurs and one of the most prominent entrepreneurs. According to our research, Wikipedia, Forbes, and Business Insider, Leo Baekeland has an estimated net worth of $1.5 million.