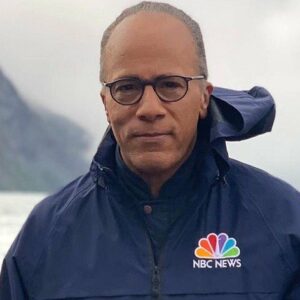 Lester Holt is an American journalist and television anchor who is best known for hosting the NBC Nightly News. Though he had enrolled the California State University, Sacramento, he eventually left out to join a local radio station in San Francisco. Lester began his career as a radio DJ. In 1981, he joined WCBS-TV as a reporter. He joined MSNBC in 2000 after 19 years with CBS and its affiliate stations, including KNXT and WBBM-TV. He initially became a replacement anchor on NBC Nightly News. In 2015, he took over as the anchor of the weekday edition of the show from Brian Williams, making him the first African–American to broadcast a weekday nightly news program. He has appeared in television shows such as Today and Dateline, as well as films such as 30 Rock and Fugitive. He has also gotten honorary degrees and several other recognitions. He and his wife currently reside in Manhattan. He has two boys, both of whom are doing well in their lives.

Lester Don Holt, Jr. was born on March 8, 1959, in Marin County, California, United States, to Lester Don Holt, Sr. and June Holt (nee DeRozario). He was the youngest of three siblings and the youngest child of his parents. His paternal grandparents were Jamaicans, while his maternal grandfather was the offspring of an Indo-Jamaican father from Calcutta, India, and a White Jamaican mother from England.

Lester attended Rancho Cordova High School and graduated in 1977. He then enrolled at California State University, Sacramento, to pursue a degree in government. In 1979, however, he skipped out and went to work for a local radio station in San Francisco.

Lester Holt began his radio career as a DJ for a Country & Western station. Lester began his career as a reporter at WCBS-TV in New York City in 1981. The next year, he joined KNXT, a CBS-affiliated television station in Los Angeles, as a weekend anchor/reporter. He returned to WCBS-TV as a weekend anchor/reporter in 1983. He began working as an evening anchor for CBS station WBBM-TV in Chicago in 1986. He worked at the station for 14 years (until 2000), during which time he hosted the evening news. Lester also reported from places including Ireland, Somalia, Iraq, Northern El Salvador, and Haiti, which are all in a state of chaos.

After a 19-year career with CBS, he left the network in 2000 to join MSNBC. Over the years, he took up critical positions at NBC News, eventually becoming a replacement anchor for Today and NBC Nightly News. Lester co-anchored Weekend Today when the show’s previous co-anchor, David Bloom, passed away. Till 2005, Lester anchored a 2-hour-long daily news program on MSNBC. On May 9, 2007, he was promoted to full-time anchor of NBC Nightly News’ weekend edition. He was on the show for eight years (till 2015).

Lester took over as a weekday anchor for Brian Williams in 2013. Back then, Brian had supposedly taken a protracted medical absence for a knee replacement surgery. Lester took over as the interim anchor of the weekday edition of NBC Nightly News in February 2015, when Brian was suspended for embellishing a narrative about the Iraq War. His post was made permanent in June of that year. Lester became the first African–American solo anchor of a weekday nightly newscast as a result of this.

Lester has also been the anchor of the NBC program Dateline (since 2006). (since 2006). He’s also the host of Dateline on ID, a new version of the show on Investigation Discovery.

Lester has also narrated numerous conspiracy theories regarding the 9/11 catastrophe in a TV show for The History Channel. He has also worked for NBC Sports as a sports reporter, covering the 2008 Summer Olympics in Beijing. In 2016, Lester was a moderator of the presidential debates. Lester interviewed President Donald Trump in May of the following year. Lester was a Republican when he moderated the presidential debate in 2016. However, Lester became politically independent in 2018. On October 5, 2020, Lester Holt will conduct a town hall with Joe Biden for NBC News in Miami.

Other Interests of Lester Holt

He appeared as a narrator in the Sci-Fi Channel documentary Mystery of the Crystal Skulls in 2008. Lester was also featured in the Making Music magazine. Due to the COVID-19 pandemic, Lester Holt gave a virtual graduation speech for Rutgers University’s 254th graduating class on May 31, 2020.

Lester Holt has received numerous honors and awards, including the Robert F. Kennedy Journalism Award for CBS’s 48 Hours: No Place Like Home (1990), the Alan B. DuMont Broadcaster of the Year Award from Montclair State University (2016), the National Association of Black Journalists Journalist of the Year Award (2016), and the Walter Cronkite Award for Excellence in Journalism (2016). (2019). Pepperdine University (2012), California State University, Sacramento (2015), and Rutgers University have all awarded him honorary doctorates (2020). On October 28, 2015, Lester became member of the California Hall of Fame.

In 1982, Lester Holt married Carol Hagen. Stefan and Cameron are the couple’s two kids. Lester and Carol have relocated to New York City. Carol is a licensed real estate salesman with previous experience as a flight attendant. Carol and Lester met in 1980 while Lester was a student at California State University. Lester was apparently prompted by his radio network to report a forest fire just as he was about to go on a date with Carol. Lester and Carol thus both proceeded to the forest fire, while he reported from the location. Stefan graduated from Pepperdine University in 2009 and followed in his father’s footsteps by becoming a news anchor. Cameron is a Morgan Stanley employee and a Stanford graduate. Lester is a huge fan of the bass guitar. He also attends the Manhattan Church of Christ in New York on a regular basis.

Lester Holt has a net worth of $35 million.