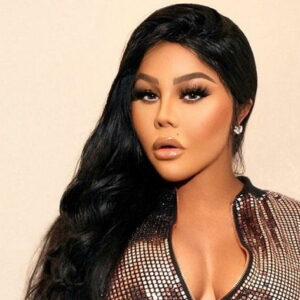 Lil’ Kim is a rapper, songwriter, model, actress, and producer from the United States. She began her career in the entertainment sector when she was a teenager, and she is well-known for her powerful voice and uninhibited rapping style. She began by rapping for rapper The Notorious B.I.G. in a freestyle format. Initially, she was a member of the Junior M.A.F.I.A. group. She went on to release her solo album, ‘Hard Core,’ which was well-received. ‘The Notorious K.I.M.,’ ‘La Bella Mafia,’ ‘The Naked Truth,’ and mixtape Ms. G.O.A.T. are among her other albums. Several significant prizes, including the Grammys and the Billboard Music Awards, have been bestowed to her. Christina Aguilera, Young Jeezy, French Montana, Miley Cyrus, Jadakiss, Beyonce, and Yo Gotti are just a few of the celebrities she has collaborated with for her music endeavors. She has been modeling since she was a child and has collaborated with brands such as MAC, Brandy, and Old Navy, in addition to pursuing a career in music. She is a philanthropist who has participated in a number of tours and fundraising events to raise awareness and funds for causes such as HIV/AIDS, breast cancer awareness, homelessness, child maltreatment, and violence against women, among others.

Kimberly Denise Jones was born on July 11, 1975, in Brooklyn, New York, to Linwood and Ruby Jones. Her father served in the United States Marine Corps. Christopher, her older brother, is her only sibling.

When she was nine years old, her parents divorced, and she began living with her father. Her father, on the other hand, was a thorn in her side.

She attended Queen of All Saints Elementary School in Brooklyn for her early education. She later attended Sarah J. Hale Vocational High School for a few years before being transferred to Brooklyn College Academy to finish her schooling.

Her father ejected her from the house when she was sixteen years old. She dropped out of high school and began living on the streets as a result.

During her teen years she was acquainted to The Notorious B.I.G. aka Biggie Smalls, who played a vital impact in her personal and artistic life. In 1994, he was a driving force behind the formation and promotion of the Brooklyn-based organization Junior M.A.F.I.A, of which she was a member.

The group’s first album, ‘Conspiracy,’ was released in 1995 to mixed reviews. The album’s lead track, ‘Player’s Anthem,’ catapulted Lil’ Kim into the spotlight. The industry listened to what she had to say.

Her debut album as a solo artist, ‘Hard Core,’ was released in 1996. The album’s success was due to her outspoken attitude and lyrical cleverness. The album opened at No. 11 on the Billboard 200, which at the time was the biggest debut by a female rapper. The album was certified double platinum by the Recording Industry Association of America (RIAA) in 2001.

Wilhelmina Models, a modeling agency, signed her in 1998. She was also chosen as the face of the fashion label ‘Brandy,’ making her the first rapper to do so. Other brands with which she has collaborated include MAC cosmetics, Old Navy apparel, and AOl Internet Service.

Lil’ Kim was preparing for a gig in New York City after the success of her album ‘Hard Core’ when she received word that the team’s mentor, Biggie, had been assassinated. Lil’ Kim and her team faced an uncertain future as a result of Biggie’s death. She dropped plans for a sophomore album and appeared on Puff Daddy and Mobb Deep’s projects.

Her second album, Notorious K.I.M., was released in 2000. The album charted at No. 4 on the Billboard 200, despite not being as successful as her debut. It was certified Platinum by the Recording Industry Association of America (RIAA) four weeks after its release.

She collaborated on the remake of Patti Labelle’s “Lady Marmalade” for the soundtrack of “Moulin Rouge” in 2001 with Christina Aguilera, Pink, and Ma. The song was a huge hit and won multiple honors, including the Grammys, that year. She became one of the most sought-after rappers of the period as a result of the success of this endeavor.

Her album, ‘La Bella Mafia,’ was released in 2003 and featured Kanye West, Timbaland, and Missy Elliot. Christina Aguilera and she cooperated on the song ‘Can’t Hold Us Down’ from the latter’s album ‘Stripped.’

The following year, she recorded a cover of ‘These Boots Are Made for Walkin’, which was later used in Victoria Gotti’s show ‘Growing up Gotti.’ In 2004, she was also included in Beyonce’s song “Naughty Girl.”

In 2004, she debuted her ‘Royalty by Lil’ Kim’ designer watch collection. Her apparel brand, dubbed ‘Hollyhood,’ was also released. She was soon connected with the Petite Peton shoe business.

‘The Naked Truth,’ her next album, was released in 2005 while she was incarcerated. ‘The Source’ gave her a five-mic rating, making her the first and only female rapper to do so.

On March 9, 2006, BET aired a six-part series called ‘Lil’ Kim: Countdown to Lockdown,’ which chronicled her final 14 days of freedom before being sentenced to 366 days in prison.

She announced her split from Atlantic Records in 2008, along with the release of her debut mixtape, ‘Ms. G.O.A.T.’ Positive feedback was received on the album.

She was a contestant on the eighth season of the reality show “Dancing with the Stars” in 2009. She came in fifth place after being matched with dancer Derek Hough. The next year, she embarked on her 2010 tour, which took her across Canada, Europe, and the United States.

In 2010, she and her cousin Katrise Jones founded the ‘Salon Se Swa’ beauty salon in North Carolina. Her second apparel line, the ’24/7 Goddess Collection,’ was released shortly after.

‘Black Friday,’ her second mixtape, was released in 2011. The mixtape did not go over well with critics. In the same year, she performed at the Zarfest music festival in South Africa, as well as the WinterBeatz Festival in Australia. In November of that year, she also released the track “I Am Not the One.”

On Valentine’s Day 2012, she released the song “If You Love Me” for her admirers. Her Return of the Queen Tour began in May 2012, and it got generally positive reviews. Tiffany Foxx, a rising rapper, was signed to her label IRS Records the same year.

Despite the fact that her third mixtape was supposed to be published in 2013, it was postponed for a variety of reasons. As a result, she made tracks like ‘Dead Gal Walking’ and ‘Kimmy Blanco’ available to the general audience. The Hard Core mixtape was offered as a free download on her official website later in 2014. ‘Lil Kim Season,’ her fourth mixtape, was released in 2016.

Faith Evan’s album ‘The King & I’ is slated to feature her in the song ‘Lovin You for Life’ in 2017. She also said that she is collaborating with Cardi B and Remy Ma on a new album. Lil Kim Season 2: The Originals, the follow-up mixtape to Lil Kim Season, was also released.

Lil’s Major Works Kim is noted for her loud voice and unrestrained rapping style. ‘Hard Core’ (1996), ‘The Notorious K.I.M’ (2000), and ‘La Bella Mafia’ (2001) are among her most popular works (2003). She became famous after collaborating with Ma, Pink, and Christina Aguilera on the adaptation of the song “Lady Marmalade” for the film “Moulin Rouge.”

For ‘Lady Marmalade,’ she won the Grammy Award for Best Pop Collaboration with Vocals in 2002, alongside Christina Aguilera, Pink, and Ma. She received multiple prizes for the same song, including the Channel [V] Thailand Music Video Awards for Popular Group Video, MVPA Awards for Best Styling and Best Soundtrack, MTV Asia Awards, Radio Music Award, and the Billboard Music Awards-Director of the Year Award that year.
In 2003, Lil’Kim received the MOBO – Fashion Icon Award.
The VH1 Hip-Hop Honors recognized her in 2016.

Shawn Powell was Lil’Kim’s boyfriend when she was a teenager. They dated for a few years, during which time Powell was convicted of robbery and imprisoned. While he was in prison, they were engaged. Shawn Powell’s relationship with Lil’Kim ended when she decided to pursue a career as a rapper.

She met rapper Christopher Wallace during this time and began an on-again, off-again relationship with him. Until his death in 1997, he continued to do so. She was pregnant with Wallace’s child at the time of his death, but she opted not to retain it and only spoke to the media about it later.

In 2002, she began dating Damion “World” Hardy, a drug dealer who was well-known at the time. The pair split a year later, in 2003, after Lil’ Kim claimed she was subjected to physical violence in the relationship.

Scott Storch, a record producer, with whom she began a romance in 2004, however they broke up after two months.
Ray J, a singer, songwriter, and television personality, with whom she has a daughter, became her boyfriend in 2007.
She afterwards began a relationship with Mr. Papers, a rapper. With him, she had a daughter named Royal Reign (born in 2014).

She has volunteered for various humanitarian projects, including assisting HIV/AIDS patients, raising donations for the United Way’s September 11th Fund, and supporting breast cancer research and treatment. She has long been a supporter of the LGBT community.

Gunshots were fired outside a New York radio station while Lil’ Kim was promoting her record on February 26, 2001, putting her in danger. A man was shot and injured during the altercation. She denied having any ties to the group that opened fire after being questioned several times.

She was found guilty of perjury and conspiracy on July 6, 2005, after lying to law enforcement and a grand jury about her role. Despite the fact that she faced up to 20 years in prison, she was only sentenced to 366 days in prison and a fine of USD $50,000.

Lil’ Kim has a net worth of $500 thousand dollars. She is a New York–born rapper and actor. Lil’ Kim is best known for being a founding member of Junior M.A.F.I.A., a rap group. In the late 1990s, she established herself as a successful solo performer.