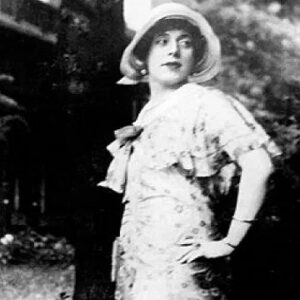 Lili Elbe was a transgender woman from Denmark who was one of the first to undergo gender reassignment surgery. Einar Wegener was born in Vejle, Denmark, and nurtured as a boy named Einar Wegener. In his adolescence, he moved to Copenhagen to study painting at the Royal Danish Academy of Fine Arts. There he met and fell in love with Gerda Gottlieb, a fellow student. Wegener discovered his true gender identity after marriage, when he modeled as a woman for his wife’s paintings. With Gottlieb’s help, he began to appear in public as a woman. He’d be introduced as Wegener’s sister, Lili Elbe. He endured four dangerous medical procedures to convert his body from male to female in the early 1930s. The latest of these procedures involved a uterine transplant and the creation of a vaginal canal. Elbe, unfortunately, developed an infection after the final surgery and died three months later from complications. ‘Man into Woman,’ a book about her life, has recorded her remarkable story. In the international bestseller ‘The Danish Girl,’ another dramatized account is described. In 2015, it was adapted into a film starring Eddie Redmayne.

Lili Elbe was born on December 28, 1882, in Vejle, Denmark, a small fjord-side hamlet. Einar Magnus Andreas Wegener was his given name when he was a boy. He may have been born as an intersex child, according to some stories, although there is no definitive proof.

Wegener and his wife Gerda Gottlieb both worked in the same profession after graduating from the Royal Danish Academy of Fine Arts. Wegener specialized in landscape paintings, while his wife drew for books and fashion publications.

Wegener’s transformation from a male to a lady happened by chance. When Gottlieb’s model failed to show up, he dressed up as a woman. To look more like the model, he was compelled to wear stockings and heels. Surprisingly, he didn’t feel out of place in the gown.

It quickly became the norm, and he began to dress and identify as a woman.
This change proved to be advantageous to the pair. Gottlieb became well-known for her drawings of her husband dressed as a beautiful woman. People were unaware until 1913 that the subject of the paintings was actually Gottlieb’s husband.

Wegener had almost completely changed his personality by the 1920s, attending public events with his wife and adopting female characteristics. He was introduced to others as Einar Wegener’s sister, Lili Elbe. Except for his wife and a few close acquaintances, no one knew who Lili Elbe was.

The Elbe learned about a way to biologically modify her body around that period. The treatment was conceivable at the German Institute for Sexual Science in Berlin, created by Dr. Magnus Hirschfeld, but it was still in the experimental stage.

The Elbe was resolved to undergo surgery to become a complete woman by 1930. Despite the fact that sex reassignment surgery was still in its early stages at the time, he chose to take the chance. He traveled to Germany for the purpose, and over the next two years, he underwent four procedures.

Dr. Magnus Hirschfeld removed Wegener’s testicles in the first surgery. Dr. Kurt Warnekros of the Dresden Municipal Women’s Clinic performed the next three surgeries, which included implanting an ovary in the abdomen, removing the penis and scrotum, and finally transplanting a uterus and establishing a vaginal canal.

The Elbe, on the other hand, was able to make her gender transformation legal. Lili Ilse Elvenes was even given a passport under her new identity.

Lili Elbe also stopped painting altogether to complete the shift and let go of her prior persona. She officially divorced Gottlieb before the fourth and final surgery because she was no longer the guy Gottlieb had married.

Einar Wegener is best known for his transformation into Lili Elbe, despite being a talented illustrator. In the early 1930s, he was the second transgender lady to benefit from sex reassignment surgery.

Wegener was awarded the Neuhausens prize in 1907, and his works were exhibited at the Vejle Art Museum and the Salon d’Automme in Paris.

Wegener met his future wife Gerda Gottlieb, a fellow student and aspiring painter while studying at the Royal Danish Academy of Fine Arts. When Gottlieb was 19 and Wegener was 22, they fell in love and married in 1904.

The Elbe, disguised as a woman, had a romantic involvement with Claude Lejeune, a French art dealer. She yearned to marry him and start a family. She thought that her most recent surgery, and uterine transplant, would allow her to realize her dream of having children.

The long-awaited last procedure – the transfer of a uterus and the building of a delivery canal – took place in June 1931. Both of these treatments were still in their infancy. She developed an infection after surgery and died of heart arrest three months later on September 13, 1931.

Every year, the LGBT film festival ‘MIX Copenhagen’ bestows four ‘Lili’ prizes in her honor.
In 1933, Ernst Ludwig Harthern-Jacobson (writing under the pen name Niels Hoyer) compiled information about Elbe’s life from her personal journals and published the book ‘Man becoming Woman.’ It’s one of the first inspirational books on the lives of a transgender person.

In the year 2000, David Ebershoff published the international bestseller ‘The Danish Girl.’ It was a make-believe account of Lili Elbe’s life. In 2015, the novel was adapted into a critically praised film of the same name.

Lili’s principal source of income is as an activist. We now lack sufficient information about his family, relationships, childhood, and other aspects of his life. Her Net worth has $1 million.

She chose the surname ‘Elbe’ after the river that runs through Dresden in Central Europe.