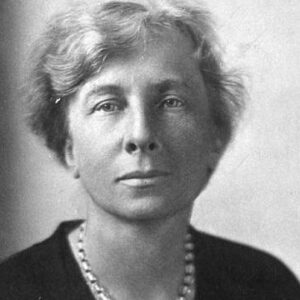 The first real industrial/organizational psychologist, Lillian Gilbreth was an American psychologist and industrial engineer. She was one of the earliest working female engineers and a highly educated woman. She and her husband Frank, who is regarded as the father of contemporary management, invented various industrial management study techniques and had a significant impact on subjects like motion analysis and human factors. The couple managed their enormous home using scientific management methods while raising 12 children. In Oakland, California, Gilbreth was born into a big family and developed into a bright and aspirational young woman. She obtained her bachelor’s degree in English literature from the University of California in 1900, then went on to finish her master’s degree and earn her Ph.D. She started using the scientific management ideas for domestic duties after getting married and having a lot of kids in order to finish them quicker and more effectively. She assisted businesses like Johnson & Johnson and Macy’s with their management departments in addition to being a busy mother. She additionally worked at Gilbreth, Inc., a management consulting company that carried out time and motion studies, alongside her husband.

The second of William Moller’s 11 children, a builder’s supply dealer, and Annie Delger’s 11 children, Lillian Evelyn Moller was born on May 24, 1878, in Oakland, California. Her parents were originally from Germany.
She began her early schooling at home before transferring to a neighborhood elementary school. She later graduated from Oakland High School in May 1896 with honors.

She met Frank Gilbreth while on vacation in Europe, and they were wed in 1904. They both had a similar interest in learning about workplace effectiveness and scientific management ideas.

They had more children over the next years, and Lillian was quite good at juggling both her professional and motherly responsibilities. In fact, she found that studying group dynamics was made easier by having a large family, and she used scientific concepts to run her own home.

The trailblazing lady also started working on her doctorate, which she finished in 1915 with a dissertation on effective teaching techniques titled “Some Aspects of Eliminating Waste in Teaching” from Brown University. It was the first industrial psychology degree ever awarded.

She joined her husband as a partner in Gilbreth, Inc., a management consulting company that specialized in time and motion studies. Lillian was more focused on the interpersonal aspects of time management, whereas Frank was more concerned with the technical components of labor efficiency.

She came to understand that there were a number of direct and indirect elements, such as pay and job satisfaction, that encouraged employees to give it their all. She worked with Frank to standardize jobs, create incentive pay structures, and simplify jobs. She was also aware of how stress and weariness affected time management.

In 1926, Lillian Gilbreth assisted Johnson & Johnson with their marketing investigation into sanitary napkins. Her background as a psychologist, as well as her portrayal as a working mother, helped the business win over customers. She also worked for Macy’s management division.

President Herbert Hoover and his wife Lou Henry Hoover were friends of hers, and Lou persuaded her to join the Girl Scouts in 1929 as a consultant. She then joined the board of directors and remained involved with the company for more than 20 years.

She participated in and oversaw the women’s division of the President’s Emergency Committee for Employment in 1930 during the Hoover administration. Throughout World War II, she continued to be involved in government work and served as an advisor to several government agencies, sharing her knowledge of the labor and education sectors.

She also worked as a teacher. She began giving lectures at Purdue University in 1925, and in 1935 she was promoted to visiting professor, making her the school’s first female engineering professor. She began teaching in the departments of industrial engineering, industrial psychology, and home economics after receiving a full professorship in 1940.

Due to her significant contributions to the study of the psychological elements of industrial engineering, Lillian Gilbreth is considered the first true industrial/organizational psychologist. She co-founded Gilbreth, Inc. with her husband, and together they conducted research on fatigue studies, time and motion studies, and other topics.

She joined the American Society of Mechanical Engineers in 1926 and was later given the Henry Laurence Gantt Medal in 1944 for her achievements in industrial engineering, sharing it with her husband.
She was chosen as the first female member of the National Academy of Engineering in 1965.
In 1966, she was given the Hoover Medal, a joint award from five engineering organizations.

In June 1903, she first met Frank Bunker Gilbreth, Sr., the man she would later wed. 13 children were born to the marriage, including stillbirth in 1915. The remaining eleven kids made it to maturity.

The kids frequently assisted their parents in their research projects. The books “Cheaper by the Dozen” and “Belles on Their Toes,” written by two of them, relate tales of their active family life.
On January 2, 1972, Lillian Gilbreth passed away.

The National Academy of Engineering created the Lillian M. Gilbreth Lectureships in her honor in 2001 to celebrate exceptional young American engineers.
The Lillian Moller Gilbreth Memorial Scholarship is given to meritorious female undergraduate engineering students by the Society of Women Engineers.

Lillian is one of the wealthiest and most well-known engineers. Our examination of data from sources including Business Insider, Forbes, and Wikipedia indicates that Lillian Moller Gilbreth’s net worth is roughly $1.5 million.