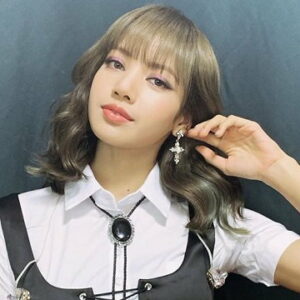 Lisa Manoban is a dancer and rapper from Thailand. She is a member of ‘BlackPink,’ a South Korean girl band. At the age of 14, she won the ‘YG Entertainment’ auditions in Thailand and relocated to South Korea. She spent five years training with the firm before debuting with the female band ‘BlackPink,’ when they published their first album, ‘Square One.’ She is the newest member of the group and has quickly established herself as their lead rapper, vocalist, and dancer. ‘Boombayah,’ ‘Whistle,’ and ‘Dhu-Du Dhu-Du’ are among her big tunes. She has won numerous honors, including the ‘Seoul Music Awards’ ‘New Artist of the Year’ and ‘Bonsang Award,’ the ‘Mnet Asian Music Awards’ ‘Best of Next Artist Award,’ and the ‘Gaon Chart Music Awards’ ‘World Rookie Award.’ She speaks Thai, Korean, Japanese, and English fluently and enjoys western cuisine and culture. She does, however, frequently express her longing for her parents and authentic Thai cuisine.

Lisa Manoban was born Pranpriya Manoban in Bangkok, Thailand, on March 27, 1997. On the recommendation of a fortune teller, her name was later changed to Lalisa, which means acclaimed, in order to bring in success. Before settling on the stage name ‘Lisa,’ she went by the aliases Liz, Pokpak, and Thailand Princess. Her elder sister, who resides in Thailand, is her only sibling.
She went at Thailand’s Praphamontree II School. She has a passion for music and dancing since she was a child. She was a member of a dancing ensemble alongside BamBam, a childhood buddy who went on to join the South Korean boy band ‘Got7.’
Lisa competed in the ‘YG Entertainment’ auditions in Thailand when she was 14 years old and got first place. In 2011, she was recruited to work as a trainee for the entertainment industry and relocate to South Korea. Her parents backed her up in her desire to move to South Korea at such a young age. She was YG Entertainment’s first non-Korean member.
She worked for the organization for five years before graduating in 2016. MV Taeyang of ‘Big Bang,’ Bobby and Mino of ‘YG Entertainment,’ were among the rising singers she performed with during her training phase.

In August 2016, she made her debut with the South Korean girl group ‘BlackPink,’ under the label of ‘YG Entertainment,’ when their first album, ‘Square One,’ was published. The tracks ‘Whistle’ and ‘Boombayah,’ which charted at number one on the ‘Billboard World Digital Songs’ chart, were included on the album.
She started out as the group’s newest member and rose through the ranks to become the group’s lead rapper, vocalist, and dancer. Kim Jennie (born in South Korea but raised in New Zealand), Rose (born and raised in New Zealand), and Kim Jisoo are the other members of the group (born and brought up in South Korea).
The band’s single, ‘Dhu-du Dhu-du,’ was originally published in Korean before being translated into Japanese and English to target a wider audience. With over 36 million views on You Tube within 24 hours of its release, the song smashed all K-pop records and was nominated for the ‘Break Tudo Awards’ for ‘Video of the Year.’
She is a regular on the South Korean variety show ‘Blackpink House,’ which depicts the members of her band’s off-stage lives. The show debuted in January 2018 and has since grown in popularity among her admirers.
In June 2018, Manoban was featured on the cover of the Japanese magazine ‘Nylon,’ and was recorded for a promotional video.

Lisa Manoban is a Buddhist devotee. She speaks Thai, Korean, Japanese, and English fluently and enjoys western cuisine and culture. She has a lot of friends, but she hasn’t been in a meaningful relationship yet.

Lalisa Manoban has a net worth of $14 million.

She was a part of the ‘We Zaa Cool’ dance group in Thailand before joining ‘YG Entertainment.’ She previously modelled for ‘NONAGON’ with iKON and modelled for ‘NONAGON’ with iKON.
Marco Brueschweiler, her stepfather, is a World Chef Association member and a recognized Swiss Master Chef. He owns a catering school in Bangkok and organizes international culinary festivals and competitions.