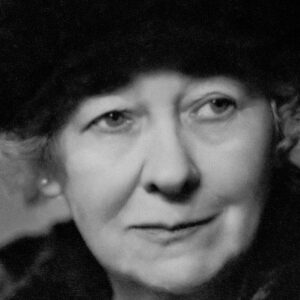 Lizzy Ansingh was a well-known Dutch artist who was most known for her doll paintings. Her paintings were distinguished by her depiction of dolls as animate beings rather than simply objects. Her works belonged to a distinct genre in the history of Dutch art. Her early paintings and drawings, which largely comprised of pictures of angels and biblical settings, were highly affected by her religious background. She learned how to paint from her aunt, Therese Schwartze, a well-known painter who pushed Lizzy to pursue painting as a career. Lizzy’s aunt also encouraged her to keep working on her doll themes. She enrolled in the Amsterdam Royal Academy for Visual Arts to enhance her skills with this goal in mind. She became a member of a group of female painters known as the Amsterdamse Joffers while at the academy. Aside from dolls, she was also an accomplished portrait painter. More information about this painter can be found in the biography provided below.

Lizzy Ansingh, also known as Maria Elisabeth Georgina Ansingh, was born to Edzard Willem Ansingh and Clara Theresia Schwartze in the Dutch province of Utrecht. Her mother was a painter and her father was a chemist. Clara Theresia was the niece of Therese Schwartze, the famous painter who taught Lizzy drawing, and the granddaughter of Johann Georg Schwartze, the painter. Angels and biblical images were among Lizzy’s initial sketches. Her theological topics were influenced by her family’s strong religious beliefs. Her aunt, with whom she lived for 16 years, from 1892 to 1908, had a significant influence on her. When Lizzy traveled to museums and exhibitions with her aunt, both at home and abroad, she pushed her to pursue an artistic career and introduced her to well-known Dutch and French painters. She met many notable painters in her teens, including Piet Mondriaan and George Hendrik Breitner. She began taking painting classes under renowned artist GHC Overman in 1893 and continued until 1897.

Lizzy enrolled at the Amsterdam Royal Academy for Visual Arts when she was 19 years old, where she studied under Carel Dake, Nicolaas van der Waay, and August Allebe, among others. She studied Greek and Roman statues there, which improved her anatomical skills and helped her flourish as a portrait painter. In 1897, she graduated from the Academy. Marie van Regteren Altena, Coba Ritsema, Ans van den Berg, Jacoba Surie, Nelly Bodenheim, Jo Bauer-Stumpff, and Betsy Westendorp-Osieck were among the female painters she met at the Academy. Albert Plasschaert, an art critic, was a huge inspiration for her and her companions. This group of painters became known as the Amsterdamse Joffers later on. The Amsterdamse Joffers became role models for a younger generation of female artists in the Netherlands after the 1970s.

Lizzy’s portraiture and doll paintings made her renowned. She began painting miniature portraits, still lifes, tropical birds, and dolls shortly after graduating from the Academy. Her mother was the subject of her first portrait, which she completed in 1899. When this painting was displayed at the Amsterdam Painters Association in St. Luke in 1900, it garnered a lot of positive feedback. Her debut into doll painting was largely influenced by her aunt’s work.

Her attention shifted to painting dolls in the early 1900s. These doll paintings have moral undertones and reflected human virtues and vices. In 1914, she painted a picture depicting the seven deadly sins, which became the most influential painting of the era. Even after Lizzy had left her aunt’s house, they remained in close contact. When her aunt died in 1918, she painted ‘The Funeral’ in her honor. In her later years, her doll paintings were marked by intimacy as well as naive painting. Her paintings, such as ‘Wedding Dolls,’ from 1936, demonstrate a ‘onacademische’ use of perspective, with characters that appear to be made of wood. Lizzy worked as an illustrator in addition to painting, albeit only on a part-time basis. She illustrated ‘The Plaetse aan de Veght’ and ‘Twee Amsterdamsche Juffers’ by Marie van Zeggelen in 1930.

She also dabbled in poetry and short stories. From 1956 to 1957, some of her poetry was published in the literary magazine ‘Maatstaf.’ ‘A small fruit basket,’ a children’s book, was released in 1927. In 1950, she published another book, ‘Aunt Tor has her birthday,’ with illustrations by Nelly Bodenheim. She also produced trip drawings, such as ‘Art treasures from the Prado,’ which was published in the Dutch newspaper De Telegraaf in 1939. Lizzy was a member of the Arti et Amicitiae and Saint Lucas art circles in Amsterdam.