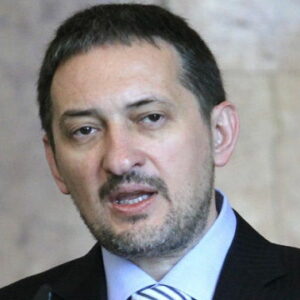 Ljubco Georgievski, a politician from Macedonia, was that country’s third prime minister. His influence on the history of the contemporary Republic of Macedonia cannot be overstated. He studied literature and became active in politics at a young age. Early on, he contributed to the formation of a revolutionary political movement whose core tenet was that Macedonia ought to be an independent state. He maintained this objective throughout his professional life, eventually playing a significant role in the country’s transition from Yugoslavian authority to its current independent position. He has held a number of important positions in the government, including the long-term head of his political party and Prime Minister of the Republic of Macedonia. His right-wing opinions are strongly opposed to communism and the previous administration. He has engaged in a number of public arguments with rival political parties and faced allegations of treason, so he is no stranger to controversy. He has also been confronted by terrorism and disputes going on within his country but has helped take measures toward fixing them. He currently holds citizenship in both Bulgaria and Macedonia.

On January 17, 1966, he was born in the County of Stip, Republic of Macedonia, which at the time was a part of Yugoslavia. About his early years, hardly much is known.

He holds a comparative literature degree from the University of Skopje.
He helped found and take the helm of the Movement for All-Macedonian Action organization in his twenties when he emerged as a significant player in the fight for Macedonian independence.

He oversaw the creation of the Democratic Party for Macedonian National Unity in 1990, which at the time was the only political party supporting the independence of his nation, the Internal Macedonian Revolutionary Organization. It obtained the most seats in the 1990 Macedonian Assembly, but due to disagreements with the rival parties, it was unable to create a new government.

He was chosen to serve as Vice President in 1991. He assisted in leading the Republic of Macedonia to proclaim independence and adopt a Constitution with the help of the populace. When it became clear that he and the President had opposing interests, he resigned from this office. He continued to fight the communist elements in politics.

He succeeded Branko Crvenkovski as the third Prime Minister of the Republic of Macedonia when he was chosen by the parliament in 1998 and held the position through 2002. He implemented substantial economic reforms during his time, including as consumer taxes and a pension system. He also signed a Stabilization and Association Agreement with the European Union.

He signed the Ohrid Agreement in 2001, working with Macedonian military forces and Albanian nationalists to put an end to the Albanian-Macedonian Conflict.
In the 2002 election, Branko Crvenkovski, who had previously held the position, defeated him in his campaign for prime minister.

He joined the People’s Party of the Internal Macedonian Revolutionary Organization in 2003.

He has written two collections of poetry, “Apocalypse” and “City,” as well as one book of short tales, “Direct Interventions with Short Stories into the Anatomic Structure of History,” as a literature scholar who has also dabbled in creative writing.

He released the book “Facing the Truth” in 2007, in which he expressed his opinions about the past and present of Macedonia.

In 2012, he released his autobiography, “It’s Me,” which details a number of behind-the-scenes activities that took place during his time in office.

He has a child with Snezana Georgievska, with whom he is married.
He is a fervent conservative and anti-Communist, and because of his beliefs, the Republic of Macedonia’s government has undergone a revolution.

He founded the Democratic Party for Macedonian National Unity, an organization that promoted Macedonia’s independence, as the Internal Macedonian Revolutionary Organization.

He was linked to a number of disputes, including allegations of corruption. He frequently disagreed in front of the public with politicians and political groups. Through his acts, such as his 2006 citizenship application for Bulgaria, he contributed to several of these disputes.

In his nation, he has had a significant impact on how ethnic conflicts are handled. Additionally, he has taken a hard stand against the terrorist activities carried out by these organizations. He was charged with favoring the opposite factions and starting the conflict despite his participation in guiding the settlement of the Albanian-Macedonian Conflict.

During his tenure as prime minister, he implemented numerous economic changes that improved the financial standing of the Republic of Macedonia and its currency. Even better, a budget surplus was made.

Ljubco is one of the wealthiest and most well-liked politicians. According to our research, Ljubco Georgievski has a net worth of $5 million, as reported by Forbes, Wikipedia, and Business Insider.

He holds himself accountable for the mistakes made by the Democratic Party for Macedonian National Unity, a branch of the Internal Macedonian Revolutionary Organization.