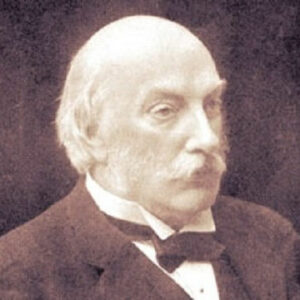 John William Strutt, 3rd Baron Rayleigh, was an English physicist who is best known for discovering the rare gas Argon. In 1904, the Nobel Prize in Physics was given to Rayleigh for this work. He shared the prize with William Ramsay, who is a chemist. He is also well-known for finding “Rayleigh scattering,” which is what makes the sky blue. He also said what would happen with surface waves, which are now called “Rayleigh waves” in his honor. He set the standards for resistance, current, and electromotive force through his careful experiments. In the later part of his life, he worked on problems with electricity and magnetism. Lord Rayleigh was an awesome teacher. He was in charge of a practical class in experimental physics and grew it from a small group of five or six students to a group of seventy advanced physicists. He had a great sense of how to write well, and every paper he turned in was clear and easy to understand. He was in the House of Lords, but he never let politics get in the way of his work in science. He liked to play tennis, listen to music, travel, and take pictures.

John William Strutt was born in Langford Grove, Maldon, Essex, on November 12, 1842. His parents were John James Strutt and Clara Elizabeth Latouche Vicars.
His father was the second Baron Rayleigh of Terling Place in Witham, Essex.

John was the oldest of Clara, Richard, Charles, and Edward, his other siblings.
He came from a family of landowners who didn’t care about science. His distant relative Robert Boyle was the only one who did.

As a child, he was often sick and had to miss school.
He went to both the Harrow School and the Elton School.
In 1857, he went to Torquay to study under Rev. George Townsend Warner. He stayed there for four years.
In 1861, he went to Cambridge to study maths at Trinity College.

He got his degree in 1865 as Senior Wrangler and Smith’s Prizeman in the Mathematical Tripos. He got a Master of Arts degree in 1868.
Rayleigh got a fellowship at Trinity in 1866, and he kept it until 1871.

Rayleigh’s theory of scattering, which was published in 1871, was the first correct explanation of why the sky is blue.
He was the head of the London Mathematical Society from 1876 to 1878.
In 1877, the first part of his important book, “The Theory of Sound,” came out. The next year, the second book came out.

Lord Rayleigh was the second Cavendish Professor of Physics from 1879 to 1884. He did experiments on standardization ohm during this time. In his presidential address to the British Association in Montreal, he talked about how this experiment turned out.

In 1884, he went back to Terling to try things out on his own estate.
In 1885, the Royal Society chose Lord Rayleigh to be its secretary.
In 1896, the English seamen’s group, Trinity House, asked him to be their scientific advisor.

In 1900, he set up the National Physical Laboratory in Middlesex, at Teddington.
Rayleigh wrote about argon for the 10th edition of the “Encyclopedia Britannica” in 1902. This was before he won the Nobel Prize.

He was also a Professor of Natural Philosophy at the Royal Institution from 1887 to 1905.
In 1905, Lord Rayleigh was chosen to be President of the Royal Society, a position he held for three years.
He was named Chancellor of Cambridge University in 1908. He stayed in the job until he died.

Lord Rayleigh made an interesting discovery when he found that the density of nitrogen in the air is higher than the density of nitrogen in chemical compounds. This strange thing and some other things scientist Henry Cavendish noticed in the 18th century led him to start a long series of experiments. In 1895, he separated the gas and gave it the name “argon,” which comes from the Greek word for “inactive.” He won the Nobel Prize for this.

In 1904, Lord Rayleigh won the Nobel Prize in Physics for finding argon gas. He gave the Prize money to the University of Cambridge so that they could build an addition to the Cavendish Laboratories.
In 1902, he was one of the first people to get the Order of Merit.

In 1871, he married Evelyn Balfour. She was the daughter of James Maitland Balfour and the sister of the Earl of Balfour, who would become prime minister.

Right after he got married, he got rheumatic fever. So, he and his wife took a trip to Egypt to get some rest. He began writing “The Theory of Sound” while he was on this trip.

Even five days before he died, Lord Rayleigh worked on his scientific papers. He died in Witham, Essex, on June 30, 1919.