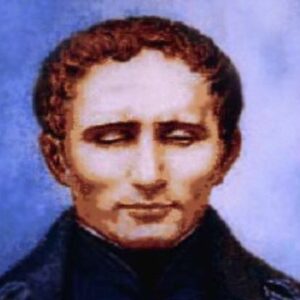 Louis Braille was a French educator who is widely acknowledged as a pioneer in the field of reading and writing systems for the blind. When Braille was a boy, he frequently visited his father’s leather workshop and worked with pieces of leather; however, he hurt his eyes in an accident while attempting to puncture a piece of leather. He became blind at the age of five as a result of the incident. His parents attempted to provide him with a conventional education, and he was eventually transferred to Paris to study at the Royal Institute for Blind Youth. Braille first encountered a reading method for blind persons at the institute, and then met Charles Barbier, who demonstrated his own reading system. It inspired Braille to create his own reading system for blind people, and the most distinguishing characteristic of his system was its simplicity, as well as the fact that blind people could also write using his system. Although Braille’s approach received little attention during his lifetime, it eventually became the worldwide reading and writing system for blind people.

Louis Braille was born in Coupvray, France on January 4, 1809 parents Simon-Rene and Monique Braille. Simon-father’s Rene was a prosperous leather dealer, and the family resided in a magnificent house. He was the brother of three sisters.

Louis Braille was fascinated by his father’s leather business from an early age and frequently visited the workshop. When he was three years old, he was struck in the eye with an awl while attempting to puncture a piece of leather with an awl. The infection began in one eye and quickly spread to the other. By the age of five, Louis Braille had completely lost his sight.

Braille’s parents pushed him to live a normal life, and despite his handicap, the kid showed great eagerness to learn. Braille was transported to Paris in 1819 to attend the Royal Institute for Blind Youth, where he would obtain an education following his early years at a school in his native Coupvray.

Louis Braille was introduced to the ‘Hauy system’, a reading system established by the institute’s founder Valentin Hauy, while he was a student at the Royal Institute for Blind Youth in Paris. Braille was not sure that his approach was the greatest possible for blind people because it did not assist them with their writing.

Louis Braille began his career as a teacher at Paris’s Royal Institute for Blind Youth in 1826 and was promoted to professor within seven years. Braille taught geometry, algebra, and history. At about the same time, Braille developed an interest in cello and organ playing. His acute sensitivity to good music was the fundamental reason he gravitated toward those instruments.

In 1821, Louis Braille met Charles Barbier, who had developed a reading method for troops that enabled them to communicate by tracing their figures over impressions of the various letters, each of which was originally composed of dots and dashes. This approach inspired Braille to create a system that would benefit blind people in both reading and writing.

Louis Braille spent several years developing his unique reading method, and after nearly eight years of hard labor, his system of raised dots for different letters was finally published in 1829.
Eight years later, in 1837, the second edition was published, and Braille was responsible for the entire system’s design. It would eventually become the standard reading system for blind people.

In 1839, Louis Braille released the book ‘New Method for Representing the Dots,’ which was intended to demonstrate a method for blind people to write in a way that could be read by non-blind people. Datapoint was the name given to the system.

The Royal Institute for Blind Youth did not employ Braille’s reading and writing system, but it would acquire prominence later. Subsequently, his poor health and respiratory problems limited his output in the fall of his life, and he retired from teaching at the age of 40.

Louis Braille’s greatest accomplishment is without a doubt his invention of the Braille reading and writing system for blind people, which enabled millions of blind people worldwide to read, write, and receive a comprehensive education.

Louis Braille died of a respiratory illness on January 6, 1852, at the Royal Institution in Paris. Many felt he had TB.
Louis Braille is honored on coins, stamps, and statues located throughout the world.

Louis is one of the wealthiest inventors and is placed on the list of the most popular inventors. Louis Braille’s net worth is estimated to be around $1.5 million, based on our review of Wikipedia, Forbes, and Business Insider.