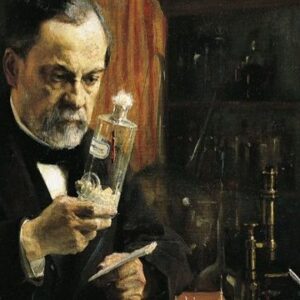 Louis Pasteur, a French scientist and microbiologist, created the first rabies and anthrax vaccines. He is also credited with developing the process of preparing milk and wine to prevent bacterial contamination, which he dubbed “pasteurization.” Pasteur is considered as one of the three main founders of bacteriology, together with Ferdinand Cohn and Robert Koch, in the science of microbiology. Louis grew up listening to his father’s patriotic tales, which instilled in him a profound passion for his country, as the son of a tanner who had served in the Napoleonic Wars. He enjoyed to draw and paint as a child, but his parents urged him to concentrate on his education. He was an ordinary student who failed his first try to pass the École Normale Supérieur admission exam, however he went on to get his doctorate. Many long-held erroneous “scientific” assumptions, such as the concept of spontaneous generation, were debunked during his work as a chemist. For creating the first rabies vaccine and his significant work in the field of germ theory, he garnered international fame. Pasteur’s life has been the topic of various debates, despite his being well-known for his breakthrough scientific work.

Louis Pasteur, the third child of Jean-Joseph Pasteur and Jeanne-Etiennette Roqui, was born on December 27, 1822, in Dole, Jura, France. His father was a tanner who had participated in the Napoleonic Wars as a sergeant major.
He was a talented young artist who enjoyed drawing and painting. In school, he was an ordinary student who showed little interest in academics. He enrolled in the Collège Royal de Besançon in 1839 after finishing his elementary education, earning a Bachelor of Arts degree (1840) and a Bachelor of Science degree (1841). (1842).
He enrolled in the École Normale Supérieure (a Parisian teachers’ institution) in 1843 and graduated with a Master of Science in 1845, followed by an advanced degree in physical sciences. In 1847, he received his degree in sciences.

He was appointed professor of physics at the Lycée de Dijon in 1848. In the same year, he left his employment to become a professor of chemistry at the University of Strasbourg.
In 1854, he became the head of Lille University’s new faculty of sciences, where he began his fermentation investigations. He established through his studies that fermentation is produced by the proliferation of microorganisms, and that the growth of bacteria is caused by biogenesis rather than spontaneous production, as was previously thought. He was appointed director of scientific studies at the École Normale Supérieure in 1857, a position he held until 1867. There, he enacted a number of changes, many of which were harsh. This boosted the institution’s reputation, but it also sparked two significant student revolts.

In 1862, he was appointed professor of geology, physics, and chemistry at the École nationale supérieure des Beaux-Arts, where he remained until 1867. His fermentation studies revealed that the proliferation of microorganisms was to blame for the spoilage of liquids such as beer, wine, and milk. He went on to design a method in which the liquids were heated to between 60 and 100 degrees Celsius, killing most germs already present. In 1865, he patented the process, which became known as pasteurization.
In 1879, while researching a disease known as chicken cholera, he published his first significant contribution in the realm of vaccination. He accidently exposed some chickens to an attenuated type of a disease-causing virus culture and discovered that they developed resistance to the true virus. This laid the groundwork for his subsequent research in the topic.

Rabies was a highly feared disease in the nineteenth century, therefore Pasteur and his colleagues began developing a vaccine. They tested their vaccination on 50 dogs after experimenting on infected rabbits. However, the vaccine had not yet been tested on humans. Despite the fact that Pasteur was not a qualified medical practitioner, he took a chance and gave the vaccine to a small kid who had been bitten by a rabid dog in 1885. Even after three months, the boy showed no signs of the sickness, and Pasteur was acclaimed as a hero.
He founded the Pasteur Institute in 1887 and remained its director for the rest of his life. A year after its founding, the institute began teaching the world’s first microbiology course, dubbed ‘Cours de Microbie Technique’ at the time (Course of microbe research techniques).

Louis Pasteur is most known for inventing the “Pasteurization” technique, which involves heating beverages such as beer, wine, or milk to a specific temperature in order to minimize the amount of live bacteria and make them less likely to cause sickness. Today, the method is widely employed in the food sector.
He also made a name for himself by producing the first rabies vaccine. Pasteur and his colleagues were developing a rabies vaccine that had already been tested on 50 dogs but had not yet been tested on humans. In 1885, Pasteur gave the vaccine to a nine-year-old kid who had been bitten by a rabid dog. The boy did not contract rabies and grew up to be an adult.

In 1856, he was awarded the Rumford Medal by the Royal Society of London for his discovery of the nature of racemic acid and its relationship to polarized light.
He received the Montyon Prize for experimental physiology in 1859, the Jecker Prize in 1861, and the Alhumbert Prize in 1862 from the French Academy of Sciences.
In 1874, he received the Copley prize for his work on fermentation. He joined the Royal Netherlands Academy of Arts and Sciences as a foreign member in 1883.
In 1895, he received the Leeuwenhoek medal, the highest Dutch distinction in Arts and Sciences for microbiology.

He fell in love with Marie Laurent, the daughter of the university’s rector, while working as a chemistry professor at the University of Strasbourg, and married her in 1849. Although the couple had five children, only two of them lived to adulthood. The other three died of diseases, and Pasteur’s determination to find remedies for infectious diseases was intensified by these personal tragedies. Beginning in 1868, he experienced a series of strokes. Following a stroke in 1894, he was seriously damaged and never fully recovered. He died on September 28, 1895, and a state funeral was held for him.