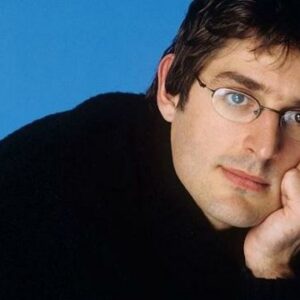 Louis Theroux is a documentary filmmaker and broadcaster of British and American descent. He is best known for his BBC Two specials and documentary series ‘When Louis Met…’ and ‘Louis Theroux’s Weird Weekends.’ He has worked as a journalist for Metro Silicon Valley, Spy magazine, and TV Nation. Theroux grew up with a natural propensity toward writing and journalism as the son of American travel writer Paul Theroux and the brother of TV presenter and writer Marcel. Both of them have had an impact on his journalistic career. Born and raised in London, the documentary filmmaker earned a first-class honors degree from Magdalen College, Oxford, before starting his profession. His work to the television industry has earned him a lot of respect. To date, Theroux has received two British Academy Television Awards and a Royal Television Society Television Award. In addition, he has been nominated for a number of additional accolades. On a personal level, he is the proud father of three children. Theroux is married to Nancy Strang and lives in Los Angeles with his family.

Louis Theroux began his career as a reporter for the San Jose-based ‘Metro Silicon Valley,’ a free weekly newspaper. He began writing for Spy magazine in 1992. He also worked as a correspondent for the ‘TV Nation’ series during this time. Following the conclusion of the series, he struck a deal with the BBC to develop the documentary series ‘Louis Theroux’s Weird Weekends.’ Theroux has written for a variety of periodicals, including ‘The Idler’ and ‘Hip Hop Connection.’

Louis Theroux created the BBC documentary ‘Weird Weekends’ in 1998. The audience was given brief views into the life of American subcultures such black nationalists, survivalists, adult film stars, and white supremacists in this documentary. The three-season documentary series ended in the year 2000.
Following that, Theroux created the documentary ‘When Louis Met…,’ in which he interviewed a different British celebrity every episode. Then he got down to business with his BBC Two specials. The British-American documentary filmmaker returned to American issues in these episodes, which began airing in 2003, and worked in a more natural style. ‘Louis, Martin & Michael,’ ‘Louis and the Nazis,’ ‘Gambling in Las Vegas,’ ‘Transgender Kids,’ and ‘Savile’ are among the documentaries featured in these specials.
The global media praised a 2007 special named “The Most Hated Family in America” for its critical acclaim. On October 29, 2017, the series’ last documentary, titled “Talking to Anorexia,” was released.
Theroux also created a documentary series called ‘LA Stories’ in 2014. ‘LA Stories: City of Dogs,’ ‘LA Stories: Edge of Life,’ and ‘LA Stories: Among the Sex Offenders’ were among the episodes of this documentary series. Two years later, he released ‘My Scientology Movie,’ a feature-length documentary in which he replicated recollections of experiences revealed by ex-members of the controversial Church of Scientology. He created the documentary series ‘Dark States’ in 2017.

Other Projects of Louis Theroux

In the 1997 gay adult film ‘Take a Peak,’ Theroux had a cameo appearance. He served as the captain of the team representing Magdalen College, Oxford, in BBC Four’s quiz ‘Christmas University Challenge’ in 2015.
‘The Call of the Weird: Travels in American Subcultures’ is a book written by Theroux.

Louis Sebastian Theroux was born in Singapore on May 20, 1970, to Paul Theroux, an American novelist and writer, and his English wife Anne. Marcel, his older brother, is also a writer and a television broadcaster. Justin Theroux, his cousin, is an actor and screenwriter. Theroux’s uncles are author Alexander Theroux and writer Peter Theroux. Gustav Kobbé, a music critic and novelist, and H. B. Hollins, a businessman and railroad mogul, were his great-great-grandparents.
Theroux attended Westminster School and went on to Magdalen College, Oxford, where he received his bachelor’s degree in 1991. In terms of his personal life, the British-American journalist and documentary filmmaker was formerly married to Susanna Kleeman. Their union was one of convenience, and it eventually ended in divorce. He married Nancy Strang, his lifelong sweetheart, in 2012. The couple currently has three children.

Louis Theroux has a net worth of $4 Million.