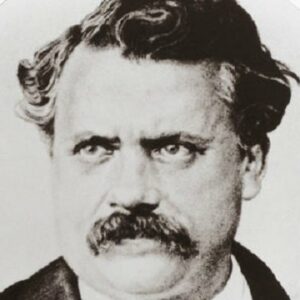 Louis Vuitton was a French entrepreneur and fashion designer who founded the eponymous fashion house. The company, which is now one of the world’s major international fashion brands, has more than 460 outlets in 50 countries. Vuitton, the designer, came from a poor household and rose to become one of the most well-known names in the luxury goods industry through his inventiveness, creativity, and sheer hard work. He was expected to make a career as a carpenter, joiner, or farmer when he was born to working-class parents in rural 19th-century France. However, when he was just 13, the ambitious young kid decided to chase his fortune in Paris and ran away from home. After two years in Paris, he went to work as an apprentice in the workshop of a successful box manufacturer. Box-making gave him plenty of opportunity to express himself, and he quickly established himself as one of Paris’ most fashionable box-makers. He went on to develop the Louis Vuitton label in 1854, which became extremely popular in a few of years. He was the company’s manager until his death in 1892.

Louis Vuitton was born in Anchay, in the Jura area of Eastern France, on August 4, 1821. Xavier Vuitton, his father, was a farmer, and Corinne Gaillard, his mother, was a milliner. He had a normal upbringing until he was ten years old, when his mother died in a tragic accident.

His father remarried soon after, and his new wife was a severe woman. Louis was an obstinate child who had a strained relationship with his stepmother. He was also becoming increasingly dissatisfied with his small village’s modest lifestyle. Even as a child, he was ambitious and plotted to flee his home. He decided to move to Paris at the age of 13 in order to pursue his fortune in the great city.

As a result, in the spring of 1835, he headed off alone and on foot. He traveled for more than two years, scrounging odd jobs along the route to make ends meet and sleeping wherever he could. The trek to Paris was not easy, but he persevered valiantly.

After a 292-mile journey from his hometown of Anchay to Paris in 1837, he arrived at his target. Paris was in the throes of the Industrial Revolution, and the city provided numerous prospects for his career advancement.

He became an apprentice in the workshop of Monsieur Marechal, a successful box maker and packer, when he was 16 years old. Louis was a talented young man, and box-making was a natural fit for him. Box-making was seen as a respectable craft in nineteenth-century Europe, and he proved to be an expert at it.

His boxes became famous among the fashionable and elite classes within a few years, and he became quite well-known. In 1853, his fortunes improved when he was assigned as the personal trunk-maker to Empress Eugénie de Montijo, Napoleon III’s wife. He was tasked with presenting her garments in an attractive manner for transfer between the Tuileres Palace, the Château de Saint-Cloud, and numerous coastal resorts.

He performed admirably in this role, and the royal family was grateful for his assistance. As a result of his position, he was able to recruit affluent and royal clients. He chose to start his own business after establishing himself as a leading box-maker for the monarchy. In 1854, he quit Marechal’s store and established his own box-making and packing business in Paris. Outside the shop, there was a sign that read: “Packs the most delicate items safely. Packing clothes is one of their specialties.”

His business was a success from the start, and after Louis Vuitton presented his groundbreaking stackable rectangle shaped trunks to the market in 1858, it became much more famous. Only trucks with rounded tops were available at the time, and his innovative design was more practical than the rounder ones. As a result, demand for his items increased dramatically.

He expanded his firm and constructed a larger workshop outside of Paris after the economic success of his rectangular-shaped trucks. His bags became so popular that he received personal orders from Egypt’s Khedive, Isma’il Pasha.

During the Franco-Prussian War in 1870-1871, his workshop was stolen and burned, putting an end to his company. He, ever the resilient character, did not allow this setback deter him from pursuing his goals. After the war, he reopened his firm and opened a new studio in central Paris, where he once again won the hearts of his customers with his ingenious and fashionable boxes and bags.

In 1867, he earned a bronze medal at Napoleon’s Fair Universelle, a worldwide exposition.
He received a gold medal and the grand prize at the Exposition Universelle in 1889.

In 1854, Louis Vuitton married Clemence-Emilie Parriaux, a 17-year-old girl, and they started a family together.
He was a very hard worker who continued to work to the end of his life. On February 27, 1892, he passed away. Georges Vuitton, his son, inherited the company after his father died.

Now his family’s net worth has hit a colossal $200 billion. Here’s how this French tycoon became the second person in history to achieve that milestone, and how investors (even those with limited funds) can steal a piece of his success.