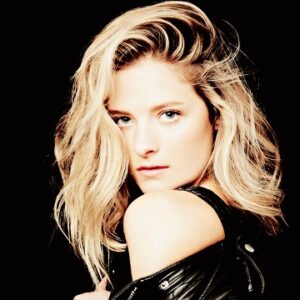 Louisa Jacobson Gummer is an up-and-coming American model who is represented by IMG Models, an internationally famous model management agency. She’s also recognized for being the youngest daughter of Meryl Streep, the legendary yesteryear star and Academy Award winner American actress who has captivated the hearts of millions of people across generations with her great past and present performances. Coming from a well-known family, with a mother who is a well-known actor and a father who is a well-known sculptor, she chose modeling as her first career, in contrast to two of her older sisters who followed in her mother’s footsteps into acting. With a combination of Swiss, German, Irish, English, and Norwegian ancestry, a nice height, and a well-toned physique, this hot diva has already made a name for herself in the worlds of fashion, glamour, and entertainment. She has appeared in campaigns for Christian Dior SE, a French luxury goods firm, as well as in magazines like as ‘Glamour’ and ‘Vanity Fair.’ She’s also appeared in a number of events with her mother and other celebrities at various times.

Louisa Jacobson Gummer was born on June 12, 1991, in Los Angeles, California, to Don Gummer and Meryl Streep. She is the youngest of four children, with three girls and a son. Her mother is an accomplished actress, while her father is a sculptor.

Her older brother, Henry Wolfe Gummer, is a musician, but Mamie Gummer and Grace Gummer, her two older sisters, have followed their mother into the world of acting.

Her family lived in a $3 million mansion in the upscale Brentwood neighborhood of Los Angeles, California, where she was born. Later, the family returned to Connecticut.

Gummer attended the exclusive Poly Prep Country Day School in Brooklyn, New York. She subsequently went on to graduate from the private, co-educational Liberal Arts College ‘Vassar College’ in Poughkeepsie, New York in 2013 with a major in psychology.

The Career of Louisa

With a sculptor father, a musician brother and mother, and two older sisters who are actresses, it wouldn’t have been too surprising if Gummer chose a career in the world of flash, glamour, and entertainment.

With her dazzling features, blue eyes, and smoldering figure, this stunning blonde chose modeling overacting like her elder sisters Mamie and Grace.

Gummer is a model with IMG Models, a well-known model management agency.
She got connected with the French luxury goods brand ‘Christian Dior SE,’ better known as ‘Dior,’ and appeared in their advertisements.

Her affiliation with the American mass media company ‘Condé Nast’ saw her appear in ‘Vanity Fair,’ a popular culture, current affairs, and fashion magazine, as well as ‘Glamour,’ a women’s magazine.

She has also walked the red carpet with her mother in some of the latter’s film premieres, as well as countless other events with other celebrities, with tremendous pizzazz and flair.

The premiere of her mother’s film ‘The Giver at the ‘Ziegfeld Theatre’ in New York City on August 11, 2014, was one of them.

On August 9, 2016, she walked the red carpet with her mother at the AMC Loews Lincoln Square 13 Theater in New York City for the opening of Maryl Streep’s film “Florence Foster Jenkins.”

There is very little information about her previous and current personal relationships, as well as her dating status. It appears that the diva prefers to keep her personal life out of the spotlight.

Louisa Gummer is a model with a $10 million net worth.