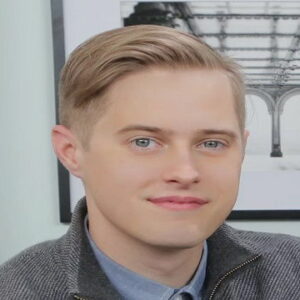 American actor, singer, composer, producer, and director Lucas Grabeel is best known for his role in the “High School Musical” movie franchise. Lucas started his career with music after being born and reared in Missouri, USA. He first began playing the drums at a nearby church and then in school plays. Acting and dancing quickly became his passions. He relocated to Los Angeles after earning his degree from the “Missouri Fine Arts Academy” (MFAA). In 2004, he made his acting debut in the movie “Halloweentown High.” Then he was cast in the Disney-made-for-TV film “High School Musical” as “Ryan Evans.” The movie was a huge box office and critical hit, and it gave Lucas a great professional start. Later, Lucas had a major part in the television series “Switched at Birth” and acted in the movie “The Adventures of Food Boy.” Then, in the television show “Smallville,” he took on the character of a youthful “Lex Luthor.” In addition to his acting performances, he has over the years provided the voices for many animated shows, including “Robot Chicken” and “Sheriff Callie’s Wild West.”

Jean and Stephen Grabeel welcomed Lucas into the world on November 23, 1984, in Springfield, Missouri. At the “Logan-Rogersville School,” he was a student. He continued on to the institute to complete high school. He had little interest in academics, nevertheless. Instead, he spent much of his time participating in extracurricular activities, particularly music and the performing arts.

He was a music junkie as a kid. At first, Lucas drummed at a nearby church that his family frequently attended. He soon developed a love for the guitar and accordion and continued to perform in school plays. He ultimately began acting at the age of 12 by participating in school productions.

He had musical aspirations when he was a young child. However, he discovered that acting was where his talent lay after making his theatrical debut with the musical “Secret Garden”

He kept performing music and acting in school shows for a few more years. He made time for dance as well, quickly becoming into a complete performer. As a student at “Kickapoo High School,” he founded the all-boy “a cappella” group “No Treble.” He went to the “MFAA” to enhance his abilities and began studying acting fundamentals there.

A few years later, when he became well-known, Lucas thanked the “MFAA” in a letter and attributed them to his extraordinary success. Lucas moved to Los Angeles as soon as he received his undergraduate degree in order to pursue his acting profession seriously.

Despite having a difficult time finding work during his first two months in Los Angeles, he soon began receiving proposals for advertisements. His early commercials included those for “Lego,” “Hot Wheels,” and a particular type of toothpaste.

He had a number of cameos in shows like “Veronica Mars,” “Boston Legal,” and “Til Death.” In addition, the 2005 movie “Dogg’s Hamlet, Cahoot’s Macbeth” marked his big-screen debut. Despite playing such minor roles, he was searching for a significant professional breakthrough, which came his way the very next year.

He had an appearance in the eagerly awaited “Disney” TV adolescent drama “High School Musical” in 2006. Ashley Tisdale’s character’s younger twin brother, “Ryan Evans,” was played by Lucas in the part. Ryan, who was presented as a stupid yet gifted musician and sportsman, ended up becoming one of the most adored characters in the movie.

Lucas returned to the wildly popular “Disney” franchise in two additional films. He provided his vocals for a number of the movie’s songs as well. He received recognition for both his singing and acting abilities. Billboard recommended that he be nominated for an Academy Award for “Best Original Song” for one of the songs he sang for the franchise, “I Want It All.”

The song was well-liked by listeners all over the world, despite not being nominated. Six of Lucas’ performances of songs from the “High School Musical” series appeared on different “Billboard Hot 100” lists.
In the comedy-drama movie “Alice Upside Down,” Lucas played the title role of “Lester McKinley” in 2007. He earned mixed reviews for his straight-to-DVD performance.

In the 2008 short films “The Real Son” and “Smoke Break,” Lucas portrayed the main characters. He voiced the title character of “Jericho” in the animated film “At Jesus’ Side” in the same year. He also had a significant part in the movie “Lock and Roll Forever.” Another notable appearance by Lucas was in the thriller “Milk,” starring Sean Penn and winner of two “Academy Awards.”

Lucas starred as the main character in the online series “I Kissed a Vampire” in 2009. A full-length feature film based on the series, which earned rave reviews, was created and released in 2012. The vampire rock musical received praise for its original take on the vampire theme when it made its debut at the “Seattle International Film Festival.”

In the teen drama series “Switched at Birth,” Lucas debuted in 2011 as one of the series’ lead characters. Two youths whose lives were shown in the series were exchanged with one another despite having been born at roughly the same time. When it began in June 2011, this series had ABC’s highest ratings ever.

In the five successful seasons of the show, Lucas portrayed “Toby Kennish.” For his performance, Lucas received a “Teen Choice Award” nomination.
Lucas provided the voice of Gustav in the DreamWorks Dragons animated series in 2013. A total of 12 episodes of the show featured “Gustav.”

In the musical comedy series “Sheriff Callie’s Wild West,” Lucas was cast as the voice of the series’ main character, “Deputy Peck,” in 2014. In addition, Lucas provided voiceovers for other animated shows, including “Elena of Avalor,” “Phineas and Ferb,” and “Doraemon.” Lucas was announced to be voicing the lead role in the animated series “Pinky Malinky” in 2018.

Recent short films starring Lucas include “Chocolate Milk” (2013) and “Pilot Season” (2014).
Lucas owns and operates a production company called 14341 Productions. Many of the short films produced under his direction have received awards at international film festivals.

Despite being viewed as a youthful idol, Lucas Grabeel wants to shake that reputation and wants to use his acting talents to feature in dark, twisted, and edgy movies.

Numerous of Lucas’ co-stars have been the subject of relationships. His relationships with Sara Paxton, Brittany Snow, Emily Morris, Pamela Saunders II, and Hannah Heart were some of the most talked-about ones.

American singer-songwriter, actor, dancer, director, and producer Lucas Grabeel has an estimated net worth of $800,000. Born in Springfield, Missouri, Lucas Grabeel started performing as a singer, actor, and dancer when he was still in elementary school.