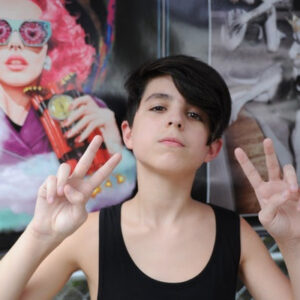 American dancer Lucas Triana became well-known after taking part in the reality dance competition “Dance Moms: Miami.” He made an appearance on the program as a part of the group known as “Stars Dance Studio.” Lucas was on the show for three consecutive seasons. He appeared in a few commercials and music videos as a result of the success and celebrity he earned after the dance reality show. Due to his exceptional abilities and performances, he has gained a significant amount of popularity. Almost all Western dancing styles are doable for Lucas, but contemporary dance is his specialty.

From the beginning, Lucas had a deep love for dancing. At age three, he began taking dance lessons. Given that his mother is a talented dancer, it was only natural for him to start dancing. For the course of two years, Lucas perfected the fundamentals of western dancing. After that, he took a three-year hiatus. When Lucas turned eight, he picked up dancing again. He danced at the “Nexstar Nationals” a year later. He achieved his first top-eight victory. A turning point for him came in 2012 when he made an appearance on the dancing reality show’s spinoff, “Dance Moms: Miami.” He soon became one of the show’s top performers.

After the show, Lucas appeared in Lori Martini’s music video for the song “I’m Not Perfect.” Sammy, Hannah, and Kimmy, three of his fellow dancers, were also included in the video. Lucas was expected to remain on the program, but sadly, it was canceled. He then made a cameo appearance in the third season of the original “Dance Moms” and continued until the fifth. One of the team members of “Candy Apple’s Dance Center” was Lucas. For the “Industry Dance Awards,” Lucas received his first nomination in the category of “Favorite Dancer 17 and Under.” Additionally, Lucas received the Regional NUVO Mini Male Breakout Artist of the Year and Regional JUMP Mini Male VIP awards.

His strongest year to date, 2013, was marked by an increase in popularity. The same year saw the back-to-back release of various films, music videos, and reality series. In the same year, Lucas also appeared in his debut commercial.

He finished second in the 2014 Regional NYCDA Junior Male Outstanding Dancer competition. In the music video for Cover Drive’s song “Twilight,” Lucas made a brief cameo.

Many renowned choreographers, such Angel Armas and Blake McGrath, have taught Lucas, but Victor Smalley, who is also the co-owner of Miami’s “Stars Dance Studio,” has been his closest and longest friend. They resemble brothers more than they do a teacher and a student. They are frequently called twins. The only “Dance Moms” cast member to appear in both the spin-off and the original is Lucas. In addition, he is the only “Dance Mom” member whose performances have been featured as “Performances of the Day.”

On March 5, 2002, Lucas Triana was born in Florida, America. He is Oscar and Bridgette’s first child. His mother is an accomplished dancer who frequently makes appearances on “Dance Moms.” Logan and Lex are Lucas’ two younger brothers. They all like going to Miami Beach and spending time with their mum.

Lucas attended school at home. After performing at the 2013 “Winter Showcase,” he later enrolled at the Southwood Performing Arts School. Lex wants to carry on in his brother’s footsteps. Logan, the younger brother of Lucas, aspires to play basketball professionally.
Although Lucas has training in a variety of western dance styles, lyrical and contemporary dance are his favorites. He is an expert at the tilt, which is his go-to dance move.

He enjoys studying science and math. Prior to being a well-known dancer, he desired to be an actor. He is an expert skateboarder and swimmer in addition to being a phenomenal dancer. Lucas has a motorcycle racing compulsion. Lucas has been battling “Nephrotic Syndrome,” a kidney disease.

One of the wealthiest and most well-known dancers is Lucas. Lucas Triana has a net worth of $5 million, per our analysis of data from sources including Wikipedia, Forbes, and Business Insider.