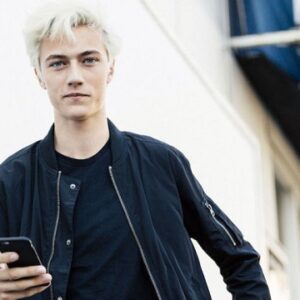 Lucky Blue Smith is a well-known American musician and model. Several international fashion magazines, including ‘Vogue,’ have featured him on the cover. Lucky began his modeling career as a child. He was a seasoned model in the fashion industry by the age of twelve. He has not only worked with some of the world’s most prominent businesses, but he has also walked the runway at some of the world’s most prestigious fashion weeks. As a model, his elegant appearance and enthralling blue eyes have been his greatest asset. He is also a part of his family’s music band, ‘The Atomics,’ because music is his first love. His three older sisters sing, and he backs them up as a musician and drummer. Lucky Blue has almost 2.9 million Instagram followers, 347.5 thousand Facebook fans, and 295 thousand Twitter followers. He is currently under the management of ‘Next Models’ and resides in Los Angeles. Stormi Bree, an American actress, singer, and model, has been the subject of much media attention.

Lucky Blue Smith, like his mother and sisters, came from a family of celebrities and pursued a career in modeling. When he was twelve, he joined his parents and siblings in enrolling his sister Daisy in the ‘Next Model Management’ program. But, as fate would have it, all of the Smith children, including Lucky Blue, were signed up with the agency.
He collaborated with Hedi Slimane and was featured in ‘Vogue Homme Japan’ shortly after. He became the talk of the town almost immediately.

Later in his career, he worked as a spokesperson for well-known companies such as ‘Gap’ and ‘Levi’s.’ His career was launched, however, when his agency advised that he add edginess to his appearance, so he bleached his hair platinum blonde, which became his hallmark style. Following that, he appeared on the covers and editorials of various worldwide magazines, including ‘Tom Ford’, ‘Vogue’, ‘CQ’, ‘Elle’, ‘Marie Claire’, ‘Numero’, ‘Harper’s Bazaar’, and ‘i-D’. He also appeared alongside pop star Lady Gaga in the SS16 fashion video for Tom Ford.

In 2009, he and his sisters formed ‘The Atomics,’ a surf-rock band in which he shows off his natural musical talent.
With his passion for music and fashion, he drew the attention of major labels, who rapidly hired him for runway shows and commercial campaigns. ‘Roberto Cavalli’, ‘Armani’, ‘Versace’, ‘Tommy Hilfiger’, ‘H&M’, ‘Dolce & Gabbana’, ‘Marc Jacobs’, ‘Michael Kors’, ‘Ralph Lauren’, ‘Gap’, ‘Loreal’,’Jeremy Scott’,’Emporio’, and Philipp Plein’ are just

He was dubbed ‘Model of the Moment’ by Teen Vogue in 2015, as well as one of the ‘Top 50 Male Models.’ In the same year, he appeared on the ‘Ellen DeGeneres Show.’ With his portrayal as Bridger Jenkins in the 2016 romance film ‘Love Everlasting,’ he established himself as an actor.

What is it about Lucky Blue Smith that makes him so unique?

His sculpted form, lanky stature, and long limbs, as well as his platinum blonde hair and blue eyes, make him a fashion hit. Many young men are copying his style, and many ladies are drooling over him. Lucky Blue, on the other hand, is so modest that he wonders what makes him so popular with ladies.
Despite his lack of formal schooling, he has been well homeschooled and possesses a high level of intelligence. He is a dedicated worker who adjusts rapidly to changes, which has helped him develop a successful job at the age of eighteen. He is about to become a father and is excited to be responsible for a younger version of himself.

Beyond Notoriety of Lucky Blue Smith

He is athletic and enjoys sports, but music is his true love. As a result, he created a band with his sisters, in which he is the lead drummer. He is a gifted writer who has published an autobiography. He goes to the gym on a regular basis and eats a healthy diet. He prefers to spend time with his family, girlfriend, and a select group of her closest friends, including Anwar Hadid. Sushi and noodles are his favorite foods, and he’s a decent cook.

Sheridan and Dallon Smith welcomed Lucky Blue Smith into the world on June 4, 1998 in Utah. Daisy, Pyper, and Starlie, his three older siblings, are also models and musicians. Sheridan was a former model in the United States, and her husband is a musician and the proprietor of a guitar-string firm. As a result, Lucky Blue has inherited traits from both of his parents. He is currently dating Stormi Bree, a beauty queen, singer, and actress who has recently been flaunting her baby belly on social media. The couple is expecting their first child, however the gender of the child has yet to be announced. In ads and on the runway, both have frequently been cast opposite one another.

Lucky Blue Smith has a $1 million net worth as an American model and Internet personality. Lucky Blue Smith is a Mormon model who also performs in a band and has a significant social media following. He walked in 12 fashion shows in the winter of 2014-15, including Fendi, Tom Ford, and Jeremy Scott.