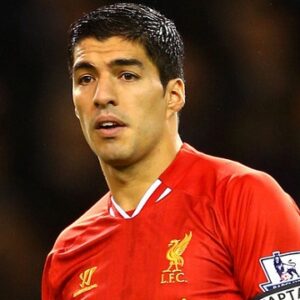 Luis Suarez is the Uruguayan national team’s standout striker, having previously played for Ajax and Liverpool before joining Spanish giants FC Barcelona. He rose to popularity for all the wrong reasons, including biting Giorgio Chiellini, an Italian defender, during a 2014 World Cup match. He is still regarded as one of the top attackers in the world, having twice been named European Top Scorer and recipient of the ‘Golden Boot’ award. His rough upbringing, characterized by poverty and a fractured family in which his father abandoned him, leaving his mother to raise his seven siblings, has been credited to his combative demeanor on the field. His childhood sweetheart, whom he later married, was his saving grace, who had a great impact on his life and helped him get back on track. With a net worth of over $ 40 million, he is now one of the most paid footballers in the world.

Rodolfo and Sandra Suarez gave birth to Luis Alberto Suarez Diaz on January 24, 1987, in Salto, Uruguay. His father was a porter with African ancestry from an impoverished mixed background. When Luis was seven years old, his family relocated to Montevideo for work.

He is one of seven siblings. Paolo Suarez, his older brother, is also a professional player who has represented Guatemala in the National Football League. Their upbringing was marred by poverty, and even a pair of football boots was out of reach. This did not deter Luis from continuing to play the sport he began on the street.

His mother supported him by bringing him to Urreta, a wealthy Montevideo football club. Suarez scored a hat-trick as a substitute in his first friendly play, and he quickly established himself as a promising footballer.
Wilson Pirez, a scout for the Nacional youth team, noticed him while he was playing for Urreta at the age of nine. By the time he was 12, his father had abandoned the family, leaving his mother and grandmother to raise the boys alone. Suarez was striving towards a position at Nacional at the time.

He wasn’t particularly good academically, and he didn’t want to be a professional footballer at first. However, his family’s financial situation and the need to work prompted him to take up the sport.
He was in the wrong crowd as a teenager and began drinking, but that changed when he met Sofia Balbi at the age of 15. She influenced his life positively and is now his wife.

He made his professional debut against Copa Libertadores for Nacional’s youth team. Suarez scored his first senior goal with a fantastic overhead kick, despite the match ending in a 3-2 defeat. He went on to play 34 times for Nacional, scoring 12 goals in the process. He was their key striker and helped them win the Uruguayan League in 2005-2006.

He made his international football debut as a part of the Uruguayan team that advanced to the quarterfinals of the 2007 U20 World Cup, which was held in Canada. They were defeated by the United States, but Argentina won the tournament. Suarez was able to have a better understanding of the dynamics of international professional football as a result of his experience.

Following the U20 World Cup, he received professional football offers from Groningen and Ajax. He played for Groningen for a short time before being acquired by Ajax for 7.5 million Euros. He scored 111 goals in 159 games for Ajax during his five-year deal with the club, and was named Dutch Footballer of the Year in his debut season.
In 2011, he was signed by Liverpool FC for a record-breaking 22.8 million Euros, making him one of the club’s most expensive players. His skill on the ball helped his club win the Champions League and earned him the ‘Golden Boot.’ He was named FWA Footballer of the Year and PFA Players’ Player of the Year.

Luis left Liverpool to join Barcelona FC for 75 million pounds in order to be closer to his wife. Along with Messi and Neymar, he is one of their three key strikers. After he joined the team, they won the renowned continental treble of La Liga, Copa del Rey, and UEFA Champions League for the second time in club history.

Suarez was instrumental in Uruguay’s fourth-place performance at the 2010 FIFA World Cup. In 2011, he was named Player of the Tournament after helping his country win a record fifteenth Copa America. At the 2012 Olympic Games, he captained the national team and scored a hat-trick against Chile. In the 2013 Confederations Cup, he was the outstanding player for Uruguay, scoring a key goal against Spain in the opening game. Suarez scored his 40th international goal for Uruguay at the 2014 FIFA World Cup in Brazil.

Suarez is still regarded as one of the top attackers in the world, having twice been named European Top Scorer and winner of the ‘Golden Boot’ award. Apart from Messi and Ronaldo, he is the only player since 2009 to win the ‘Golden Boot’ and the Pichihci Trophy in the same year.

His on-field hostility has been attributed to his rough upbringing and the type of company he kept until he found the woman he finally married.
In 2009, he married Sofia Balbi, his childhood girlfriend. Benjamin and Delfina, their son and daughter, are their children. He has always been close to his wife, who has served as both a source of strength and a calming influence in his life.

Luis Suarez has a net worth of $70 million.

He was kicked off the field after stopping a certain goal against his team with his hand during the 2010 World Cup encounter against Ghana. His squad, on the other hand, went on to win the game.
On three instances, he was also penalized for racial abuse, head-butting a referee, making obscene gestures to the audience, and biting another player on the pitch. After his biting events, the Dutch daily tabloid De Telegraaf dubbed him “Cannibal of Ajax.”
He has a poor habit of receiving yellow cards and being forced to leave the field.
Suarez is known for his nutmegging style, which involves rushing directly towards the goal and deftly passing the ball through the opponent’s legs.
He has promoted various sports and commercial products throughout his career, including Adidas, Pepsi, and Samsung.