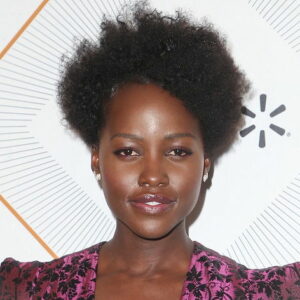 Lupita Nyong’o is a Kenyan–Mexican actress who has won numerous awards. She moved from being a production assistant to earning a ‘Academy Award’ in just a few years after receiving her education in the United States. Her exceptional talent and wit allowed her carve out an extraordinary career filled with varied and meaningful jobs that most actors can only dream of. Her ‘Academy Award-winning’ role in the critically acclaimed picture ’12 Years a Slave,’ directed by Steve McQueen, came shortly after her graduation from ‘Yale.’ It was the first time a Kenyan or a Mexican actor received a ‘Academy Award.’ She also gave an outstanding performance on ‘Broadway,’ in the critically acclaimed drama ‘Eclipsed.’ She has acted in films such as ‘Star Wars: The Force Awakens,’ ‘The Jungle Book,’ ‘Black Panther,’ and the horror film ‘Us.’ She has also directed a music video. She also works to raise awareness about critical health issues, poachers, and animal rights in Africa. She’s also spoken up about the negative aspects of Hollywood, including the sexual harassment that many performers face.

Lupita Amondi Nyong’o was born on March 1, 1983, in Mexico City. Her family resided in Kenya until they were forced to flee due to political repression. They’d all suffered as a result of their activism in the face of a ruthless president. Her father was tortured, and her uncle was assaulted and thrown from a ferry. His body was never found, and the official report indicated that his death was due to an accident. Her family’s experiences with horrors undoubtedly led to her deep comprehension of her character’s suffering in ’12 Years a Slave.’ Her prior acting expertise also aided her in giving a fantastic performance in the film.
Despite the difficulties, her family provided a nurturing and safe atmosphere for their daughter. Her Kenyan parents are both educated and supportive of their children’s brains and creativity. Dorothy Ogada Buyu, her mother, is the managing director of the ‘Africa Cancer Foundation’ and owns a communications firm. Peter Anyang’ Nyong’o, her father, is a college professor and politician who served as Kenya’s minister of health.
Lupita’s family returned to Kenya when she was a year old, and she spent her childhood in Nairobi. Her family, on the other hand, sent her to Mexico to learn Spanish for seven months. She participated in school plays and discovered her interest for performing while attending the ‘Rusinga International School’ in Kenya. Her first professional acting role was at the age of 14 in a ‘Phoenix Players’ company production of ‘Romeo and Juliet.’
She continued her studies at Nairobi’s ‘St. Mary’s School’ before attending college in the United States. ‘Hampshire College’ was where she studied film and theater. She returned to school once her acting career took off. She enrolled in the famed ‘Yale School of Drama,’ where she participated in numerous school projects and was even awarded a prize for “Acting Students of Outstanding Ability.”

She landed the role of ‘Patsey’ in the historical drama ’12 Years a Slave’ shortly after graduating from ‘Yale’ (2013). Brad Pitt produced the film, which was directed by Steve McQueen and included a stellar cast. As a result, it was unsurprising that it was the ‘Academy Awards’ star that year. It told the account of a free man named ‘Solomon Northup,’ who was kidnapped and sold as a slave. Solomon was seen befriending Patsey, an enslaved young woman played by Lupita Nyong’o. Critics were blown away by her performance. She “gives one of the most committed big-screen debuts imaginable,” according to the British cinema magazine “Empire.”
She appeared in the action blockbusters ‘Non-Stop’ and ‘Star Wars: The Force Awakens’ the following year. Lupita returned to theater after these roles, which were considerably different from her first breakthrough, to star in ‘Eclipsed,’ a drama that eventually made it to ‘Broadway’ and won Lupita Tony Award nominations.
In 2016, the actor made a comeback with roles in ‘Queen of Katwe’ and ‘The Jungle Book.’ She played ‘Nakia’ in the phenomenal ‘Marvel’ box-office success ‘Black Panther.’ Lupita told reporters that being at the center of an action film was amazing, and that she relished performing many of her own stunts. She also stated she had underestimated the extent of her training.
The horror film ‘Us,’ directed by Jordan Peele, was another great hit in 2019. The film depicted a family being frightened by a bunch of strangers who looked exactly like them but wanted to kill them. Lupita had to play two roles, which earned her plaudits from critics. She did concede, though, that the job had drained all of her inner resources and left her tired. It was an emotional experience for her, and she had to take breathing classes in order to control the evil character’s voice in the film.
‘In My Genes,’ a video documentary she shot and produced in 2009, was her first.

Following the premiere of ‘Us,’ some people accused her of dehumanizing disabled people by changing her character’s speech. She claimed that her character’s voice in the film was influenced by a neurological illness called spasmodic dysphonia, and that she had no negative intentions when modifying her voice to fit her character. “The voice of Red was a mix of influences and unmistakably a fabrication of my mind,” she said.

When it comes to her personal life, Lupita Nyong’o is quite private. There were reports that she was dating other men, but she preferred not to comment on them. She is probably too preoccupied with her charity and other commitments to have time for a relationship. She gives presentations about black women’s beauty, promotes for animal rights, and fights for the establishment of birthing clinics in Uganda. She also works as a model and has been the face of a number of brands and publications.

The actor has five siblings and is of Luo heritage. The Luo people have a custom of naming their children after events that occurred on the day they were born. As a result, her Spanish name, “Lupita,” is a contraction of “Guadalupe.”