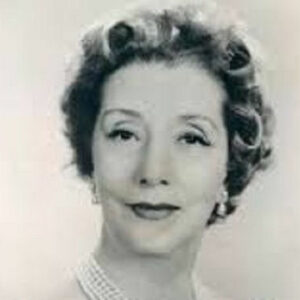 Lynn Fontanne was an American actress born in the United Kingdom who spent the majority of her career in the United States and wowed audiences with her acting abilities. She married Alfred Lunt in 1922 and collaborated with him on various theater productions, films, and television projects. Their enduring theatrical love affair and collaboration were quite rare to witness. For 55 years, they were inseparable and appeared in sophisticated comedies by Terence Rattigan, George Bernard Shaw, and Noel Coward. Noel Coward created his magnum opus ‘Design for Living’ with Lynn Fontanne and Alfred Lunt in mind. They participated in 27 theatrical productions together during the course of their acting careers and captivated audiences wherever they appeared, regardless of the venue. Their efforts transformed the embryonic ‘Theater Guild’ into a booming success, and their ability to act in unison was bordering on ecstatic. They could communicate over each other’s lines but were heard independently and appeared as if they were having a real-world discussion, convincing the audience that they were also a part of it. In the history of theater or film, there has never been an acting team quite like Lynn Fontanne and Alfred Lunt.

Lynn Fontanne was born Lillie Louise Fontanne on December 6, 1887, in Woodford, Essex, England. Her father, Jules Pierre Antoine Fontanne, was a French brass-type creator, and her mother, Frances Ellen Thornley, was an Irishwoman. She was the younger of two sisters.

She chose to become an actor at the age of ten after watching a country play in Woodford.
She began taking acting classes in 1902, at the age of 15, from a renowned Shakespearean actress named Ellen Terry.
In 1903, she toured the country with Ellen Terry, performing the play ‘Alice Sit by the Fire’.

She made her professional acting debut in 1909 with the pantomime ‘Cinderella’ at London’s Drury Lane Theater.
In 1910, she made her Broadway debut at the ’39th Street Theater’ in the play ‘Mr. Preedy and the Countess.
She appeared on the New York stage in 1916 in ‘The Harp of Life’, as well as in ‘Out There’, ‘The Taming of the Shrew, and George S. Kaufman’s ‘Someone in the House’.

In 1919, she encountered Alfred Lunt backstage at the ‘New Amsterdam Theater’ after completing a run of Kaufman and Marc Connelly’s ‘Dulcy’. They married three years later and made their debut appearance together in the play ‘Sweet Nell of Drury Lane’ in 1923.
In 1924, both of them featured in the critically acclaimed play ‘The Guardsman,’ which ran on Broadway for 40 weeks.

She made her film debut in 1925 with ‘The Man Who Found Himself’ and her stage debut in 1928 with ‘Strange Interlude’.

Lynn and her husband were approached to perform in the film adaptation of ‘The Guardsman’ by Irving Thalberg of MGM when the production of ‘Elizabeth the Queen’ was being staged in Chicago. They traveled to Hollywood to film the film. They were nominated for Academy Awards for this picture.
In 1935, she co-starred in light comedies such as ‘Reunion in Vienna’ and ‘Point Valaine with her husband.

From 1940 to 1941, she toured with Robert E. Sherwood’s anti-war play ‘There Shall Be No Night.’ The show offered solace to Londoners during the bombs of World War II.
She and her husband achieved their greatest success in 1946 with Terence Rattigan’s comedy ‘O Mistress Mine,’ which ran for 451 performances at New York’s ‘Empire Theater.’

The Lunts did not return to the New York stage for four years following their engagement in ‘I Know My Love’ in 1950.
Fontanne demonstrated her creative ability through her performance in complex comedies such as Noel Coward’s ‘Quadrille,’ which was produced in London and other places in 1952.

In 1954, she duplicated her achievement by appearing in the same play at New York’s ‘Coronet Theater.’
From 1956 to 1957, she toured with Howard Lindsay and Russell Crouse’s play ‘The Great Sebastians’ and appeared in the same play at the ‘Lunt-Fontanne Theater’ in New York in 1958.

‘The Second Youth’ in 1924, ‘The Man Who Found Himself’ in 1925, ‘The Guardsman’ in 1931, and ‘Hollywood Canteen’ in 1944 were among the films in which she appeared.
Lynn and Alfred’s final stage engagement together was in 1958’s ‘The Visit’ in New York.
They retired from the stage in 1958 and settled in Genesee Depot, Wisconsin, at their 120-acre farmhouse-home dubbed ‘Ten Chimneys.’

Lynn Fontanne was nominated for an Academy Award for Best Actress for her performance in ‘The Guardsman’ in 1931.
In November 1935, she was awarded the ‘Medal for Diction’ by the ‘American Academy of Arts and Letters.

In 1964, President Johnson presented Lynn and Alfred with the ‘United States Freedom Medal Prize.
In 1965, she and her husband Alfred were nominated for ‘Emmy Awards’ for their roles in the television film ‘Magnificent Yankees.
In 1970, they shared a ‘Tony Award.’

They got the American National Theater and Academy’s ‘National Artist Award’ in 1972.
Lynn was inducted into the ‘American Theater Hall of Fame and was named a ‘Kennedy Center’ member in 1980.

On May 26, 1922, she married Alfred Lunt but remained childless.
The ‘Globe Theater’ was renamed the ‘Lunt-Fontanne Theater’ in honor of Lynn Fontanne and her husband after they retired from the stage in 1958.

Lynn Fontanne died of pneumonia on July 30, 1983, at the age of 95, in Genesee Depot, Wisconsin, United States of America.
She and her spouse were featured on a 1999 postage stamp issued by the United States Postal Service in New York.

Lynn is one of the wealthiest stage actresses and is included in the list of the most popular stage actresses. Lynn Fontanne’s net worth is estimated to be $1.5 million, based on our review of Wikipedia, Forbes, and Business Insider.

Lynn Fontanne adored reading Barbara Cartland’s romantic books and going for bicycle rides.
They were adamantly opposed to acting in films.
Although she was older than her husband, she concealed her true age from Alfred, who believed she was younger.