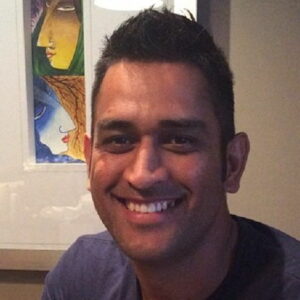 M. S. Dhoni is a cricketer from India who is most known for leading the Indian ODI side to their second World Cup victory in 2011. He made his ODI debut for the national team against Bangladesh on December 23, 2004, and went on to captain the Indian ODI team from 2007 to 2016. On December 2, 2005, he made his Test debut against Sri Lanka, and from 2008 to 2014, he led the team in Test cricket. He is regarded as one of the top “finishers” in the game’s limited over format, according to his aggressive playing style. He is also one of India’s most successful captains, with a number of records to his name. Under his captaincy, the Indian side rose to No. 1 in Test cricket in 2009. He was also the captain of the Indian squad that won the ICC World Twenty20 in 2007 and the ICC Champions Trophy in 2013. While his international records frequently eclipse his IPL achievements, he also helped his team, Chennai Super Kings, win the IPL twice in 2010 and 2011.

Mahendra Singh Dhoni was born on July 7, 1981, into a Rajput family from Uttarakhand in Ranchi, Bihar (now Jharkhand). Pan Singh, his father, is a retired employee of MECON (a Public Sector Undertaking under the Ministry of Steel), where he held positions of junior management. Devaki Devi, his mother, is a stay-at-home mom.

Narendra Singh Dhoni is Mahendra Singh Dhoni’s older brother, while Jayanti Gupta is Mahendra Singh Dhoni’s older sister. His brother is a politician, while his sister is a teacher of English. He was a student at the DAV Jawahar Vidya Mandir in Shyamali, Ranchi, Jharkhand. He was a physically active student who was first more interested in badminton and football. His high school football team’s goalkeeper. His football coach once sent him to fill in as the wicketkeeper for a small club’s cricket squad by pure chance. He wowed everyone with his performance and earned a permanent berth as the Commando cricket club’s regular wicketkeeper for three years, from 1995 to 1998.
During the 1997-98 season, he continued to excel and was named to the Vinoo Mankad Trophy Under-16 Championship team. He just began to take cricket seriously after completing the tenth grade.

M. S. Dhoni, who had previously only played school and club cricket, was selected to play for the Central Coal Fields Limited (CCL) side in 1998. His dedication and hard-hitting skills impressed Deval Sahay, an ex-Bihar Cricket Association Vice-President, and he was given opportunities to play First Class cricket.
He did not make the East Zone U-19 team or the Rest of India squad for the 1998-99 season, but he was selected for the East Zone U-19 squad for the CK Nayudu Trophy the following season. He was unable to perform adequately, and his team came in last place in the competition.
During the 1999-2000 season, he made his Ranji Trophy debut for the Bihar cricket team, scoring 68 not out in the second innings. In the following season, he struck his first first-class century in a game against Bengal, but his team lost.

Money was not a luxury for him, as he came from a middle-class Indian family. He came to Midnapore, West Bengal, at the age of 20 after winning a Travelling Ticket Examiner (TTE) position at Kharagpur railway station through a sports quota. From 2001 to 2003, he worked as a railway employee.
In 2001, he was chosen to represent the East Zone in the Duleep Trophy; however, due to his location in Midnapore, the Bihar Cricket Association was unable to relay this information to Dhoni in a timely manner. He found out about it after his team had already arrived in Agartala, the match’s location. While one of his friends was able to get a car for him to get to Kolkata Airport for a flight, the car broke down halfway through, forcing Deep Dasgupta to play wicketkeeper. He proceeded to perform well in the Ranji Trophy and the Deodhar Trophy during the 2002-03 season, which helped him gain attention. In the 2003-2004 season, he was a member of the East Zone side that won the Deodhar Trophy, in which he hit another century.

In 2003-04, he was called up to the India A squad for a trip of Zimbabwe and Kenya. During a match versus Zimbabwe XI, he had seven catches and two stumpings. He also played a key role in his team’s back-to-back victories over Pakistan A, scoring a half-century in the first game and two centuries in the second. Sourav Ganguly, the then-captain of the Indian National Team, took notice of his performance.

M. S. Dhoni was selected for the national ODI team for India’s tour of Bangladesh in 2004-05 after a stellar performance in first-class cricket. Unfortunately, he was run out for a duck in his first match and struggled throughout the rest of the series.
Despite his dismal performance in his maiden series, the selectors chose him for the Pakistan ODI series that followed, demonstrating their faith in him. Dhoni did not disappoint them, scoring a record-breaking 148 in his fifth ODI encounter, the most by an Indian wicketkeeper-batsman.

Dhoni was upgraded to the top of the batting order for the third match of the bilateral series between India and Sri Lanka after not getting enough opportunities to bat in the first two matches. He took full most of the occasion, smashing a quick 183 not out off 145 balls while chasing a target of 299. During the series, he set a number of records and was named Man of the Series for his efforts. He scored 68, 72 not out, 2 not out, and 77 not out in four of the five ODIs between India and Pakistan in 2005-06, helping his team win the series 4-1. On the 20th of April 2006, he dethroned Ricky Ponting to take over the top spot in the ICC ODI Rankings for batsmen, although for only a week.
Dhoni had a fantastic performance in the two series he played against the West Indies and Sri Lanka prior to the 2007 Cricket World Cup Tournament, averaging above 100. However, he did not do well during the World Cup, and the Indian squad was unable to go past the group stage.

In 2007, he was selected the ODI team’s vice-captain for two series against South Africa and England. In South Africa, he also led the Indian side to the ICC World Twenty20 championship, which they won by defeating the Pakistani team. He was assigned the task of leading the Indian ODI team for the series against Australia in September 2007 after his successful captaincy in Twenty20. He would then go on to lead India to a World Cup victory in 2011, for which cricket icon and former teammate Sachin Tendulkar praised him greatly. He scored 1198 runs in only 24 innings in 2009, matching Ricky Ponting’s total of 30 innings in that calendar year. In 2009, he too spent several months at the top of the ICC ODI Batsman rankings.

During the 2005 series against Sri Lanka, M. S. Dhoni was selected as a wicketkeeper for the Indian Test Team. In his debut encounter, which was cut short due to weather, he scored 30 runs. In the following match, he scored his first half-century, helping India win by a large margin.

In an aggressive performance that helped India avoid follow-on during India’s tour of Pakistan in early 2006, he achieved his maiden test century. In the following three matches, he continued to shine, one against Pakistan and two against England.

After then-captain Anil Kumble was hurt in the previous match and announced his retirement, Dhoni, who had served as vice-captain during the series against Australia in 2008, was promoted to full-time test captaincy in the fourth match.

In 2009, he went on to make two century in a series against Sri Lanka, helping his team to win. In December 2009, India became the No. 1 team in the ICC Test Rankings under his captaincy. In the 2014-15 season, he withdrew from Test cricket after the third match of India’s tour of Australia. He continued to play One-Day Internationals in the years after, but stepped down as ODI captain in January 2017. He is, however, still available for limited-overs cricket.

M. S. Dhoni was in a relationship with a girl named Priyanka Jha in 2002, as disclosed in his biopic. It was a passionate but short-lived relationship, as she died the next year from injuries sustained in a vehicle accident. Dhoni, who was with the India A squad at the time, found out about the incident much later and was devastated personally. It took him about a year to get his professional career back on track.

Dhoni began dating Sakshi Singh Rawat in 2008, after they met at the Taj Bengal, where she worked as an intern after graduating from the Institute of Hotel Management in Aurangabad with a bachelor’s degree in hotel management. Even though she was seven years younger than him, the two knew each other during their formative years because their fathers were MECON colleagues and they both attended the same school. They dated for two years before marrying on July 4, 2010, only one day after getting engaged. On February 6, 2015, the couple welcomed a baby daughter called Ziva into the world. Neeraj Pandey, a film director, chose to develop a biography about his life and achievements after he won the Cricket World Cup in 2011. On September 30, 2016, the film M.S. Dhoni: The Untold Story was released.

Dhoni was named as the 12th man for the second Duleep Trophy match in Pune after failing to arrive in time for the East Zone’s first encounter in Agartala in 2001. While he did not participate in the game, he had his first encounter with his idol Sachin Tendulkar when the latter requested water during the drinks break.
His home in Ranchi was destroyed by irate fans after India was knocked out of the 2007 Cricket World Cup in the first round. During this time, he had to seek police protection.